Katie Kieffer
|
Posted: Aug 28, 2017 12:01 AM
Share   Tweet
The opinions expressed by columnists are their own and do not necessarily represent the views of Townhall.com. 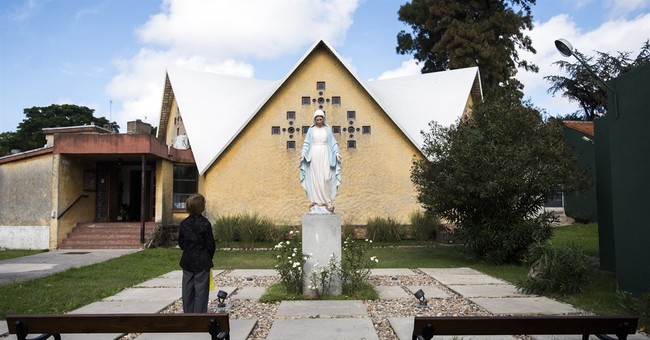 Baby Jesus? Too wholesome for schoolchildren. Colin Kaepernick? Perfect hero material: effeminate; unsportsmanlike and willing to play the victim card. Is this for real? Yep.

A Catholic school is relegating a statue of the Christ child to the basement cobwebs while the National Museum of African American History and Culture is building a display to honor NFL quarterback Colin Kaepernick.

What is a statue and what does it represent? Why do we erect statues? These are fundamental questions which we must ask before we surrender to madness. Because the logical conclusion of the current war on artistic representations of Caucasians, males and Christians is to ban every artistic treasure—including those which inspire minorities and non-Christians.

Last week, reports surfaced exposing California’s San Domenico School’s board of trustees for removing many of its most cogent outward signs of Catholicism: 180 statues. The spineless board unanimously voted to relegate the school’s sculptural centerpiece, the Madonna and Child, and many more statues including one depicting the school’s patron—Saint Dominic—to the basement.

Somehow, San Domenico’s board didn’t anticipate that its decision to order the baby Jesus to “time out” would garner negative national headlines—even among non-Catholics. Now, the school has a black eye. After all, Christians aren’t supposed to tell their redeemer to literally or metaphorically: “Go back to the drafty manger.”

Not far from San Domenico, a secular grade school—Portland’s Lynch View Elementary—is also snubbing its founders and history by removing all references to the last name of its founders, berry farmers Catherine and Patrick Lynch. The goal: “to foster a sense of inclusion for our ever-changing student population.”

In 1900, Catherine and Patrick Lynch made a very generous donation of land for a one-room school house for the education of children in their community. Despite outcry from alumni who are proud of their school’s heritage, the Centennial School District insists on political correctness.

Young people deserve good role models and they deserve the truth. Humans are not angels (obviously), which means that we need outward, physical signs to educate and motivate ourselves. Naming a school after the Lynch family reminds schoolchildren that philanthropy and entrepreneurship played a key role in building America’s education system. Likewise, displaying Catholic statues of holy persons encourages and reminds children to emulate humility and kindness.

Love must drive our actions—including our political actions—or we will soon find ourselves breaking our own laws and succumbing to irrationality. A wave of irrationality is spreading across our nation as many of our leaders make decisions based on a craving for popularity rather than neighborly love.

J.R.R. Tolkien wrote the Lord of the Rings series to teach his children about their Catholic faith. Countless women, non-Catholics, and people of color have found delight and inspiration in these stories. Tolkien’s trilogy, published in 1954, is one of the most best-selling stories of all time because a tale of honorable characters on an adventurous path is universally inspiring regardless of the protagonist’s gender or skin color.

You need not be male to be inspired by a man. My interest in political commentary came from my father. Likewise, you need not be Christian to be empowered by the sight of a woman carefully cradling her baby boy under the loving and protective eye of her carpenter husband. A loving, atomic family unit is universally uplifting.

But progressive politicians looking to control our personal lives—are leading Americans, especially women and minorities—to believe that it is “alienating” or “offensive” to see a positive artistic depiction of a man or a Christian.

A female journalist writing for TIME recently touted the need for more statues of women in America to counteract the “toxic form of masculinity that keeps women from advancing.” She then went on to blatantly exaggerate the facts, implying that only three of 22 statues in Central Park depict women. In fact, at least nine statues depict or honor females in Central Park and at least two statues were sculpted by female sculptors.

If anything is toxic it’s the assumption that women cannot be inspired by men. If anything is demeaning to minorities it’s legislation like that being pushed in San Francisco: to arbitrarily increase the number of females depicted on statues, street signs and public art by 30 percent by 2020. That’s not even enough time to properly research, commission and complete a project. A bronze sculpture can easily take at least four months of intense, hands-on labor.

Is pride motivating our rush to dispose of history—both spiritual and secular? Destruction is easier than construction. It takes little thought or courage to toss a statue into a musty basement or slash a word out of a name. It takes humility, patience and fortitude to carefully analyze and then decide whether to modify, abandon or keep a piece of artwork.

Let’s not deny our children perfectly uplifting art and history because we have developed hearts of stone. Otherwise, we’re no better than the lifeless statues we profess to deplore.