Win Immigration Battle, or Lose in 2018

Katie Kieffer
|
Posted: May 08, 2017 12:01 AM
Share   Tweet
The opinions expressed by columnists are their own and do not necessarily represent the views of Townhall.com. 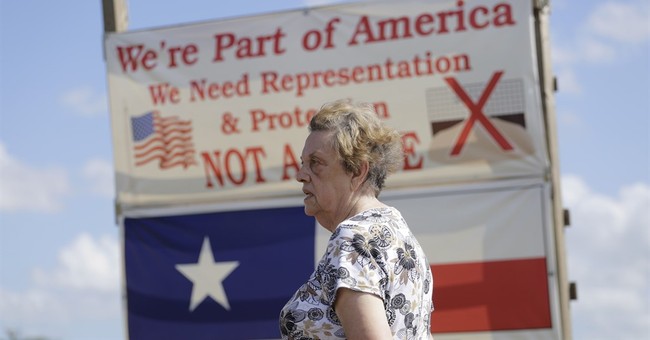 Make us so tired of winning that we beg you to stop winning, President Trump—especially on your signature issue: immigration reform.

You love to win, Mr. President. Your foes are numerous and your true friends are few, yet we’ve seen you win—time and again—against all odds. We’ve seen you employ the wisdom of golf legend Arnold Palmer: “Always make a total effort, even when the odds are against you.”

All odds are against you, Mr. President. But if you don’t win America’s immigration battle, voters will fire the Republican party in the 2018 midterms. And you will kiss away your Twitter promise to “run our government for the next 8 years.” Here’s how to win on immigration in three steps.

Step 1: Think Outside the Wall

1,991 miles. Or, the distance from the International Space Station to Earth, multiplied by nine. Our southern border is incredibly long—and only one-third of its length is fortified.

Much of that fortified third—including roughly half of the Arizona-Mexico border—is barricaded by “Normandy” style fencing, comprised of crisscrossed posts. Unfortunately, this type of fence only impedes vehicles, not pedestrians, and even smugglers transporting immigrants in vehicles have bypassed Normandy barricades by erecting ramps.

Of course, nearly twice as many illegal immigrants entered the United States via the Texas-Mexico border than the Arizona-Mexico border over the same time period. But the Texas border is dominated by private property and natural barriers that make it a more viable candidate for security improvements via technology and boots on the ground than physical barriers.

Many private Texas land-owners and ranchers adamantly oppose the construction of a fence on their property. Recall that the Lone Star State joined the union on the unique condition that—upon entry—all unclaimed Texas land was retained by the state and subsequently distributed to private land owners rather than claimed by the federal government. Consequently, the Texas border is contiguous to thousands of private parcels.

Texas ranchers are understandably concerned about just compensation if the federal government overtakes their portion of their property to build a wall. They are also apprehensive about losing their water rights; and the possibility that development around the Rio Grande flood plain will exacerbate flooding.

President Trump can fulfill his promise to build the wall without building an actual wall along every section of the border. He could commence construction now via executive order and bypass Democrats and RINOs in Congress. He also doesn’t need to wait for funding. In terms of costs, a $20 billion wall project represents less than two percent (1.75%) of total annual construction spending in the United States. Pocket change.

We simply need to prioritize the buttressing of the most porous sections of the border (i.e. Arizona and Texas). And, we must employ a reliable method of security (i.e. agents, technology or physical barrier) for the particular topography and land ownership at each mile of border (i.e. desert; river; mountains; national park; or private land). The most reliable method of security will sometimes be a wall—but not always.

In April, President Trump announced that around 800,000 young illegal immigrants currently living in the United States could “rest easy.” President Obama welcomed these young people into the country under the Deferred Action for Childhood Arrivals (DACA) program. Ever since, these so-called Dreamers have enjoyed privileges normally reserved for U.S. citizens, like college aid. In the year 2015 in the state of Texas alone, 24,982 illegal immigrants qualified for subsidized “dreamer” college tuition.

“They want to feel they have the same rights as other students,” University of San Antonio professor Gabriela Sanchez-Soto told Express News in defense of students who entered America illegally as minors and now call themselves “dreamers.” United We Dream director Greisa Martinez, meanwhile, complained: “Just telling me that he [Trump] … wants me to rest easy doesn't make me be able to be any more safe.”

It is astonishing to hear young people express ingratitude for the abundance of privileges they’ve received—even after breaking America’s immigration laws. Why don’t we give them what they claim to want: safety and equality? We can do this by sending them back to Mexico where they will no longer fear deportation and will have the same rights as their Mexican peers. Maybe then they will appreciate what they had in America.

Step 3: Support the Suspension of Sanctuaries

President Trump should take to his Twitter megaphone and encourage governors and state legislators to follow the bold leadership of the Texas legislature and Governor Greg Abbott. Last week, the Texas legislature passed Senate Bill 4 (SB 4)—empowering local law enforcement in so-called sanctuary cities like San Antonio to do what they couldn’t do before: support federal immigration laws.

SB 4 emboldens local law enforcement to be an active partner with U.S. Immigrations and Customs Enforcement (ICE). Once Abbott signs the bill into law, if a police officer detains any individual on reasonable suspicion, they may (at their discretion) ask the individual about their immigration status. Police chiefs and sheriffs who bar officers from abiding by SB 4 face potential jail-time.

Kate Steinle and Sarah Root are the names of two Millennial women who lost their lives at the hands of illegal immigrant criminals who were shielded by sanctuary city policies in California and Nebraska respectively. As a presidential candidate, Donald Trump courageously educated the American public on Steinle’s and Root’s tragic stories and the link between illegal immigration and crime.

President Trump, when you assume a strong leadership position, you tend to win. Speak out now and act swiftly—so that true freedom, justice and equality win big in 2018 and beyond.