Katie Kieffer
|
Posted: Apr 25, 2016 12:01 AM
Share   Tweet
The opinions expressed by columnists are their own and do not necessarily represent the views of Townhall.com. 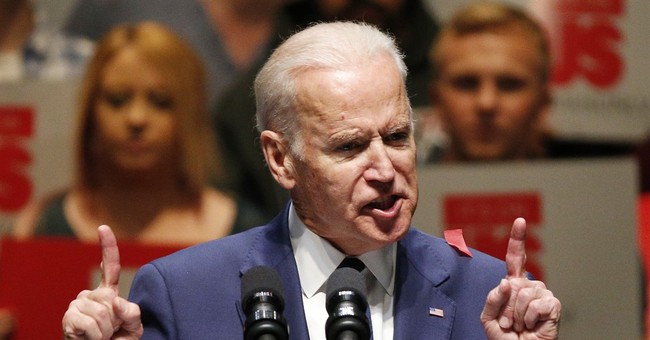 Vice President Joe Biden is a hugger: the Internet is awash with memes mocking his gauche embraces of other people’s wives and daughters. Well, next month, the University of Notre Dame—one of America’s most prominent Catholic institutions of higher learning—will metaphorically hug Biden back, by awarding him a prestigious Laetare Medal.

Notre Dame’s decision to honor a man who actively works to implement public policies that will derail the University’s ability to express its own First Amendment rights of free speech and religious expression holds a lesson—and a warning—for us all, Catholic or not.

Grab a shovel, head to a five-star golf course and start digging. If you’re not kicked off the course, you’ll soon find that it will seem easier to keep digging the hole than to return the soil, meticulously re-plant the sod, and spend the next few weeks tending to the patch until it blends perfectly with the remaining greens.

In 2009, Notre Dame President Father John Jenkins dug quite the hole when he bucked the opposition of 83 cardinals, bishops and archbishops to feature Barack Obama as a keynote speaker and award him with an honorary degree.

Blowback was massive. Donors walked. Media mocked. Americans of all denominations—who looked to Notre Dame as a religious leader—were shocked.

Then, for a time, Notre Dame seemed earnestly invested in repairing the hole. I even praised the University here and here in its valiant lawsuit of the current administration over the unconstitutional and unethical U.S. Department of Health and Human Services (HHS) mandate.

The mandate asks religious organizations to offer—or subsidize—contraceptives, sterilization methods and abortion-generating prescriptions through their private insurance plans. Notre Dame showed itself to be a true leader capable of coalescing Catholics, Protestants, Eastern Orthodox Christians, Jews, Muslims and more in this particular fight for religious freedom.

Disappointingly, however, Notre Dame’s administration is now revisiting its 2009 mistakes—despite great opposition from clergy and even its own students—who published a letter in opposition to Biden’s upcoming recognition in the student newspaper and held a prayer vigil in peaceful protest. Some 25,000 concerned citizens have also signed a petition asking the University to change course.

“It is wrong for Notre Dame to honor any ‘pro-choice’ public official with the Laetare Medal, even if he/she has other positive accomplishments in public service, since direct abortion is gravely contrary to the natural law and violates a very fundamental principle of Catholic moral and social teaching: the inalienable right to life of every innocent human being from the moment of conception,” South Bend, Ind., Bishop Kevin Rhoades responded to Notre Dame.

Bishop Rhoades added that the University’s choice may “provoke scandal” by leading observers to conclude “that one can be ‘a good Catholic’ while also supporting or advocating for positions that contradict” key “principles and teachings.”

Biden is so famous for his invasive hugging habit that it has been called a “creepy, creepy trend” by Gawker. And Gawker is certainly not a publication for prudes.

Meanwhile, there is a creeping trend whereby the Fighting Irish are not the only Catholics growing more comfortable with capitulation than pugilism.

On May 7, another great Catholic institution—Loyola Marymount University (LMU)—will give former President Bill Clinton the commencement keynote podium and allow him to proffer the last word of “wisdom” to its students.

Clinton is a “great statesman” whose life demonstrates a “commitment to improving the lives of other people, during and beyond his career in U.S. politics, [and] embodies the ethos of [Catholic charity],” gushed LMU President Dr. Timothy Snyder.

In truth, Clinton took his own Biden-style hugging to the next level—lying under oath about pressuring and fondling a female employee young enough to be his daughter into frequent “non-sex” in the Oval Office. And abusing his veto pen and our taxpayer dollars—and then later the Clinton Foundation—to support partial birth abortion and Planned Parenthood.

Not exactly the behavior of a public leader “committed to improving the lives” of other humans.

In the Gospel of Luke, a woman named Mary Magdalene—widely known for living a louche lifestyle—is described as humbly repenting by washing Jesus’ feet with her tears. It is not until after her act of public contrition that Jesus praises her openly. Jesus did not award wrongdoers with medals. Rather, he praised prodigal sons and penitent daughters.

Both Fr. Jenkins and Dr. Snyder—and countless other college presidents—could use a refresher course in the Bible and the U.S. Constitution. Colleges and universities have the unique ability to mold malleable young minds to seek truth, beauty and goodness—or to deceive them into believing that truth is relative and political correctness is the epitome of excellence.

Fr. Jenkins could start by renewing the vow he made in his own 2005 inaugural address: “Notre Dame is different. … we at Notre Dame must have the courage to be who we are. If we are afraid to be different from the world, how can we make a difference in the world?”

You and I must hold American colleges and their administrations accountable because our country’s future leaders are being developed on college campuses. We owe it to ourselves; our children; and our grandchildren to ask these great private institutions to stay true to their values and cease pandering to politicians—especially bureaucrats that publicly work to derail the right of students and staff to freely learn, work and worship.

Enough with hugging. It’s time for the Notre Dame Irish to return to fighting.