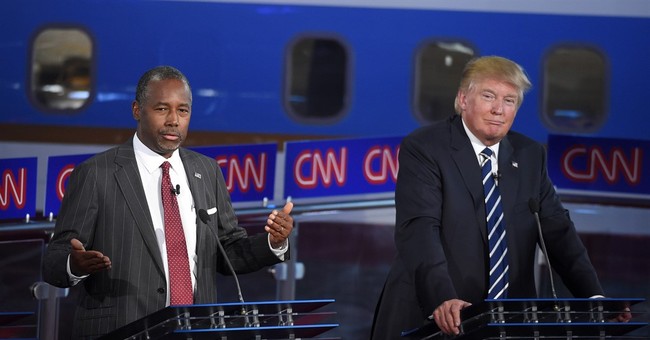 GOP elites are drawing on fine cigars while drawing up a secret plan to crush top-polling candidates Donald Trump and Ben Carson.

Today I’ll let you in on a quiet movement within the upper echelons of the GOP to take down politically incorrect presidential candidates, especially Donald Trump and Dr. Ben Carson. Unless Common Core Crusader Jeb Bush is your guy—and I hope he’s not—you and I must expose this movement before it ends our vision for a people’s advocate in the White House in 2016.

Certainly, Sen. Ted Cruz and Sen. Rand Paul are strong candidates that I’ve awarded A-ratings on immigration. However, my focus today is on the two candidates who—by their poll numbers; treasure chests; and policies—pose the biggest threat to the GOP establishment.

Trump and Carson poll as #1 and #2 respectively. With regard to money, Trump can self-finance his campaign and still received 73,942 unsolicited donations totaling $3.7 million last quarter while Carson out-raised all the GOP candidates, raising over $20 million during the same quarter. Trump and Carson’s politically incorrect policies endear them to everyday Americans while causing GOP elites to shake in their boots.

Most American voters believe that “delegates” (ordinary citizens elected by fellow citizens) from all 50 states meet at a national convention and determine the GOP presidential nominee. In truth, a small band of so-called “GOP elders” picks the nominee. If they dislike the delegate’s pick, they gather behind closed doors. Chuckling softly, they re-write the nominating rules.

In Tampa in 2012, GOP elders changed the rules at the last minute so a majority of delegates from just eight states would decide the nominee. This rule change forced Romney into the position of nominee despite different wishes from many delegates.

Tipsy from drinking their own Kool-Aid, GOP elders forgot that moderates like John McCain and socialized medicine fan boys like Mitt Romney are unelectable. We handed Obama the White House. Again.

Ego is the greatest weakness of any villain and prideful GOP elders sometimes fail to cover their tracks. Last week, TIME Magazine uncovered their plan to crush populist voters like you and me in 2016. TIME reports: “[The 2012] rule can always be rewritten at the [2016] convention, say party bigwigs, if it will help speed selection of a nominee.”

“Speed selection” is code for “shut up the delegates and select the most boring and moderate candidate who the elites deem electable.” GOP elders are planning to repeat their 2012 strategy for winning, which turned out to be a strategy for losing. The elites don’t understand that few independents will vote for their 2016 Moderate and Boring Dream Pick: Jeb Bush.

Ignoring Their Base At Their Own Peril

"This should be a state issue,” Bush said in May about Common Core. (Sounds a lot like Romney talking about how socialized medicine was great for Massachusetts.)

“The days in which people could lawfully emigrate to the United States just because they wanted to pursue the American Dream are as much a memory as is Ellis Island,” Jeb Bush wrote with Clint Bolick in their book, “Immigration Wars.”

We do have a legal process whereby immigrants may become citizens. Ignoring this process is a slap in the face to all the immigrants who have complied with this process. And bemoaning the fact that some immigrants struggle to achieve the American Dream is disrespectful to the millions of American citizens who are unemployed, underemployed or drowning in student loan debt while non-American citizens—the “Dreamers”—are awarded amnesty and free college tuition.

It would be so refreshing if GOP elites would abandon their puerile fear of being called racists, sexists or backwoods hicks who “cling to” guns—and nominate a winner.

As Rush Limbaugh said last week, “Republicans inside Washington's Beltway (and including in our media) really, really do believe that it is a negative to fight back, to oppose Obama… [Trump] does nothing but criticize them, and he does it in politically incorrect ways, and he is soaring, and still the establishment does not learn.”

Among Millennials who identify as Republican, the majority overwhelmingly favor Donald Trump according to Zogby Analytics. The Millennial generation is 95 million strong and their votes have the power to determine the 2016 election. If GOP elders looked back at the 2012 CNN exit polls or reviewed how Millennials approach public policy, they would learn that young swing voters like a grassroots candidate, not a moderate. For example, after Obama, Ron Paul was the presidential candidate who received the most votes from Millennial voters in 2012.

A new CNN poll shows Trump and Carson have an enormous edge over the GOP field in the vital early-nominating states of Nevada (Trump 38/Carson 22) and South Carolina (Trump 38/Carson 18). “No other candidate comes close to those top two in either state,” CNN reports. Meanwhile, the latest Fox News poll reveals Carson (Clinton 39/Carson 50) and Trump (Clinton 40/Trump 45) are the two GOP candidates with the greatest chance of winning when paired against the Democratic frontrunner.

Trump’s appeal is his zeal to help Americans find employment and receive good educations before attempting to care for non-Americans.

Carson’s appeal is his moxie and brainpower to articulate to President Obama at the 2013 National Prayer Breakfast—in just 43 seconds—a free market plan for reforming healthcare that would be more effective than the 900-plus-page legal surprise that Nancy Pelosi made us pass “to find out what is in it.”

Trump and Carson used their polling weight to demand fair play at the October 28 presidential debate hosted by CNBC. But, to retain their national momentum, they will need our help as the RNC evidently is not their friend.

If you ask the American people, they’ll say Donald Trump and Ben Carson are the most electable GOP candidates. If you ask D.C. insiders, they’ll tell you Jeb Bush. Because Bush is their boss.

For example, when Gov. Scott Walker bowed out of the race, his former finance team member Anthony Scaramucci took a job working for Bush. Now he and other ex-Walker team members are gushing to the media about Bush’s electability. “Jeb Bush has the horses behind him,” Scaramucci told Bloomberg News. Terry Kilgore, another former Walker employee who now works for Team Bush, told Bloomberg: “Jeb has staying power.”

Staying power is different from electability. Bush is part of a dynasty. His name ain’t disappearing. Independent and Republican voters want a winner with the tenacity to say “no,” not a yes-man guaranteed to lose.

Share this message with every independent and Republican you know. Get it out in the sunshine. GOP elders will employ rule re-writes at the national convention to block our vision for 2016 if we allow them to continue drawing long puffs on their cigars as they draw up shady schemes.