Sports and State: Time to Separate 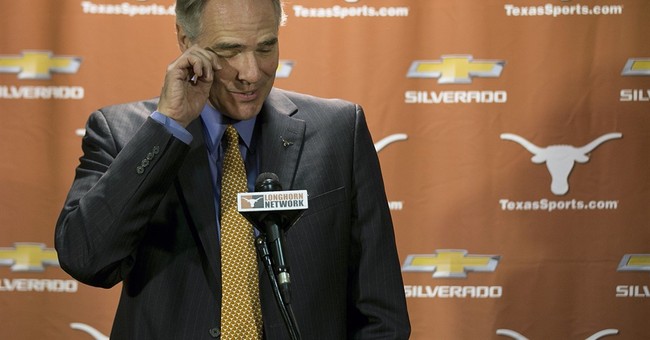 All in favor of more separation between sports and state, raise your beer koozies and stop millions of dollars from being wasted on bad coaches and old stadiums.

I love sports and so do you. But it’s not right that you and I don’t have a strong say in how our politicians play ball with our money when it comes to renovating Stone Age stadiums or retiring awful athletic directors. I’m calling foul on plays like a Texas judge’s plot to renovate the Astrodome despite strong voter opposition. And I’m hitting the buzzer on schemes like asking taxpayers to subsidize the remaining $5.6 million on University of Texas athletic director Steve Patterson’s contract.

Join me as I explain why we should be throwing more politicians into the penalty box.

“I see hiking trails and all sorts of activities on the upper levels,” Harris County judge Ed Emmett gushed to Houston’s KHOU-11 news as he described his plan to fake punt his own constituents in Texas.

Twice voters have shut down Emmett’s scheme to renovate the Astrodome. In November of 2013, Houston voters stopped a referendum to approve a $217 million renovation of the park. In 2014, voters were polled by the KHOU-Houston Public Media Poll and again soundly rejected a plan to recycle the stadium into an indoor park.

Make no mistake: Houstonians love their sports teams—which is why the Astros play at the beautiful Minute Maid Park and not the Astrodome. Houston taxpayers are even paying for a $15 million renovation to Minute Maid Park that will make the center field area safer for players and the facility more posh and plush for fans.

The first-ever domed and air-conditioned stadium, Astrodome was heralded the “Eighth Wonder of the World” when it was erected for the Oilers and Astros in 1965. Half a century later, Astrodome is more like the Eighth Eyesore of the World. 1999 was the last year the stadium housed a home team. Other than sheltering Hurricane Katrina victims in 2005, the dome has been quiet and in 2009 closed to all events.

Demolishment would cost between $29 and $78 million—anywhere from 7.5 and 2.8 times less than renovation. Yet, this summer, Emmett told the Houston Chronicle he’s tuning out those clamoring for demolishment—because it would only cost a “little” more to renovate. (Emmett defines the word “little” much like Bill Clinton defines the word “is.”)

He and his fellow commissioners acknowledged that taxpayers oppose the renovation, which is why their latest Astrodome resurrection plan will allow them to bypass the voters by partnering county and city dollars with private investment. Five bureaucrats sitting on the “Commissioner’s Court” are set to determine whether this renovation plan goes forward before year’s end. Five people should not be able to go against the decisions of Harris County’s 4.4 million residents.

This story raises a crucial question at the national level as many communities across the country will undergo political battles over stadiums: shouldn’t there be a stronger line between sports and state—to prevent the state from encroaching on the freedom of residents to enjoy sports as they see fit?

$5.6 Million to Bail Out Steve Patterson

You and I subsidize institutions of higher learning all across the country and thus we deserve more say in the contracts that are signed by these institutions.

On September 15, former University of Texas athletic director Steve Patterson must have been throwing triumphant fist pumps into the air as he resigned under pressure and walked away with $5.6 million dollars—without working another minute at the University.

Such misuse of taxpayer subsidies is unfortunately not rare. In 2013, after coach Mike Rice was terminated for verbally abusing basketball players, Rutgers University athletic director Tim Pernetti resigned and left the campus clutching an I-Owe-You for $1.2 million.

Of course, sports contracts are not the only kind of contracts that need reform within higher education. Time Magazine recently reported the Patterson deal “wouldn't be the first taxpayer-funded college payout to raise concerns.” Penn State president Graham Spanier received $2.4 million in deferred compensation and severance pay as a kind of You’re Terminated, But P.S. We Love You goodbye gift. Also, Ohio State president E. Gordon Gee didn’t get soap in his mouth but wads of hundred dollar bills ($337,080) after retiring under pressure for making disparaging statements. Taxpayers would have been on the line for a whopping $5.8 million if Gee hadn’t happened to find another job.

We all know the heart-pounding exhilaration of cheering in unison with hundreds of likeminded fans in a large stadium. Watching live sports can be a great a release from the pressures of work and interpersonal relationships. It’s a beautiful pastime. However, if our money is involved in supporting this pastime, we should have more say in the operations behind the pastime.

Politicians should not be able to get by with ignoring us after we’ve repeatedly told them how we think, and “public servants” who work as college administrators shouldn’t be able to use sports as an easy path to retirement riches. Share this with your fellow sports fans and let’s together demand a meaningful separation between sports and state—for the love of the game.