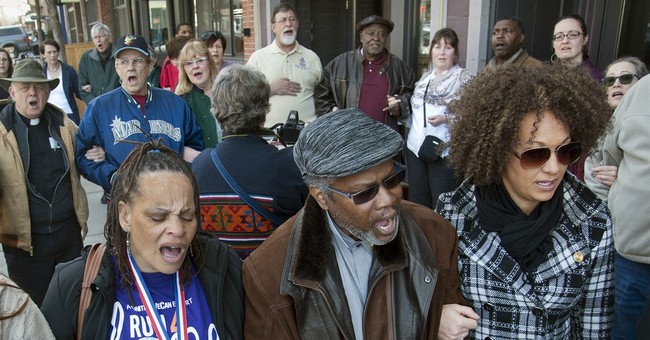 White girls like Rachel Dolezal and black girls like Dajerria Becton go wild without the presence of strong father figures.

No one knows why Rachel Dolezal—a 37-year-old adult Caucasian woman—pretended to be black for the past 20 years. No one understands this woman’s full motivation for falsifying her heritage, donning wigs and feigning her adopted African American brother is her biological son.

Likewise, no one knows—given conflicting eyewitness accounts—exactly what happened at the McKinney, Texas pool party on June 5 where 15-year-old black girl Dajerria Becton tussled with a white police officer.

In Dolezal’s case, cynics would blame her greed and narcissism. Cynics would say Dolezal’s disguise made it easier for her to become the president of Spokane, Washington’s N.A.A.C.P.; chair a police watchdog committee; and earn her living as a professor in the Africana Studies Program at Eastern Washington University.

I blame her father, Larry Dolezal. I blame him in order to make a bold point: we must stop blaming the police, sexism, racism or even our own children every time our children go wild. Instead, we need to develop, hold accountable and appreciate great fathers.

Research shows that a girl’s father—more than her mother and certainly more than the local police department—shapes how confident and mentally secure she becomes later in life.

Here are the facts: Rachel Dolezal’s father gave her custody of his 16-year-old adopted black son about five years ago and then lost touch with both his son and his daughter. Today, Rachel is in a mentally unstable place. She cashed in on her false African American identity for lofty leadership roles (Spokane N.A.A.C.P. president and police oversight commission chair), a paid Africana professorship and has made thousands of dollars selling her “authentic” civil rights artwork.

Why did Larry wait until Rachel was a grown, 37-year-old woman to hold her accountable—in a very public and embarrassing way—for deceiving her employer, her students and her community? Why did he allow her to grow so psychologically confused that she now calls an imaginary man her father?

Back to Dajerria Becton. We know (by her own admission) that this 15-year-old, bikini-clad partier was not an innocent bystander. “I’m guessing he thought we were saying rude stuff to him,” Becton told KDFW news in explaining why she thought Cpl. David Eric Casebolt lost his cool with her.

If you watch the online video of Casebolt and Becton’s interaction, it certainly looks as though Casebolt overreacted to Becton’s sassy comments. It is also clear that she verbally accosted him while he was being swarmed from all sides by a throng of volatile adults and teens. A more realistic explanation for his behavior (than racism) was the combination of bad timing and high stress.

Fathers like Jahi Adisa Bakari, whose 13-year-old daughter claims an officer punched her at the party—stood before dozens of national media cameras and microphones and moaned how he was “disappointed the [McKinney] Police Department did not send any female or black officers up there [to the party].”

Seriously? Does Bakari want to teach his daughter to regress to the era of segregated busses? Does he expect you and me to applaud his backwoods mentality? Forget it.

Bakari either has no understanding or zero empathy for the stress cops face on the daily beat. The Australian Institute of Criminology has found “Police suffer stress through constant exposure to danger, traumatic events, prisoner threats, conflicting task demands, short-staffed stations, court appearances…” and that “[s]tress risks may be increased for female officers…” University of Buffalo research published in

Science Daily also finds that “23 percent of male and 25 percent of female officers reported more suicidal thoughts than the general population (13.5 percent).” So, police face enormous trauma—especially the female cops that Bakari was whining were not at the pool party.

Officers handcuffed Caucasian teen Grace Stone for a full 30 minutes after she merely approached them. All the officers—not just Casebolt—were under high stress and were doing whatever they could do to get the party under control. Unlike Becton, Stone did not make disparaging comments toward the police officers yet she was still slapped with handcuffs.

From Larry Dolezal to Jahi Bakari, can all fathers—white and black—please step up to the plate and stop blaming your daughters; your local police officers; racism or sexism when your girls go wild? Can you take responsibility for the compound influence of years of poor parenting? Can you become mature father figures so that your daughters can flourish socially and emotionally?

I’m blessed to have a good father. Without his powerful and consistent influence, I too would be a girl gone wild. I’d be pretending—much like Elizabeth Warren—that I’m Pocahontas’ sister, Katiehontas.

So, it moves me to speak up when I see other young girls whose fathers are selling them short. Last week, some folks on Twitter decided to tell me how police are “a-holes” and “psychopaths” who “don’t deserve their jobs, respect or safety.” Police are not always perfect but they are not crazy and we should not expect them to referee our grown children after we fail as parents.

Every woman wants a strong father figure in her life. This Father’s Day, especially if you are a woman, show your father how much you appreciate him. Tell him “thank you” for being there for you—and for sometimes showing you tough love. If you’re looking for a way to express this, consider giving him a copy of “Let Me Be Clear,” which includes a chapter called “Why Fathers Matter.” You’ll learn why all women—including lesbian women—desire strong father figures. You’ll also learn why Trayvon Martin deserved better than a father like Barack Obama, who once called Martin “my son.”

Thank you, fathers. Without you, gals like me would go wild.