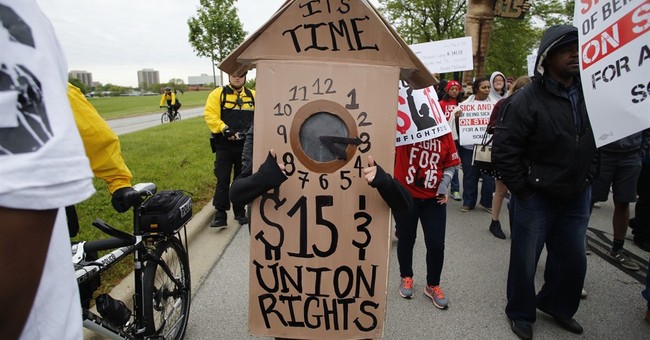 If you love In-N-Out burgers and care about the workers who flip your burgers, then you should support a minimum wage of $0.

Deep down, I know you’re tired of seeing actors jump up and down for TV cameras while waving professional signs that read: “McGreedy! McStingy! McPoverty!” or “McShame. McDonald’s. Raise That Wage.”

You weren’t born yesterday. You doubt that these protestors come up with these slogans on their own or fashion them into makeshift signs with their own cardboard, sticks and markers. You suspect they were given signs and paid to wave them. Indeed, in recent protests, 84% of McDonald's "protesters" were not real McDonald's employees but paid and trained professional rioters.

Professional rioters pout and shout in public for a one-time cash payment—not a cause. Since rioters are not entrepreneurs, they do not empathize with the challenges of competing in the restaurant business where profit margins hover at 4%. Nor do they understand the feat of turning a profit while relying on a staff of over-paid and inexperienced high school students.

Greed clouds the intellect of many professional wage protesters. For, reason as well as the Fourth Amendment tell us that every American business owner has a natural right to spend their private property (or cash) on employee wages as they see fit.

Los Angeles’ current minimum wage is above the Federal minimum of $7.25. Last week, the Los Angeles city council voted to raise its minimum wage to $15 an hour. Los Angeles is a city of nearly 19 million. According to TIME, a maximum of 800,000 people—or about four percent of the city’s population—will benefit.

Besides “benefiting” up to 800,000 people, the wage hike will eventually hurt an untold number of people. Prepare to see (and smell) more wrinkly clothing and shaggy hair when Los Angelenos delay trips to the dry cleaners and barber.

Joking aside, we have recent a case study of what happens when we jack up the minimum wage. After the city of Seattle, Washington raised its minimum wage to $15, Forbes reported: “Restaurants are closing at higher than normal rates.”

On the national level, six years after the “end” of the Great Recession, wages are still anemic. In April, hourly wages rose 0.1 percent, prompting the New York Times to run a story in May about how “the growth in jobs failed to translate, once again, into any significant improvement in pay.” So, even if you believe the government’s data on job increases, there is no way to avoid the reality that wages are stagnant. Across America, employers are keeping wages low in order to eek out a profit.

Seattle tried, without luck. Now Los Angeles is trying. But Bank of America just surveyed their small business owners and found that only 21 percent have experienced full economic recovery over the past six years. Retailers in particular are fighting for the pecuniary crumbs of price-conscious American consumers. Indeed, my Millennial peers are so frugal that Whole Foods is rolling out a cheaper version of its grocery brand in a frantic attempt to get us to even walk through their doors.

Our overall economy is floundering and no amount of arbitrary lawmaking will spur wage growth. We need organic growth, which comes from small businesses generating profits that are sizable enough to justify expanding, hiring and increasing benefits.

Entrepreneurs have and will respond to mandatory wage minimums by moving their companies; raising prices; reducing staff; deferring expansion plans; or by reducing the quantity and quality of their services.

You are left with two choices. You can enjoy tapping your foot in line at your favorite burger joint as you wait for that cheeseburger, soda and fries that used to take three minutes and now takes 15 due to staff reductions. You can accept mediocrity as the new reality of American retail service. Or, you can speak up in defense of a $0 minimum wage and an America where bureaucrats do not force entrepreneurs to over-pay burger flippers. It’s a juicy choice to ponder as you grill out on Memorial Day.