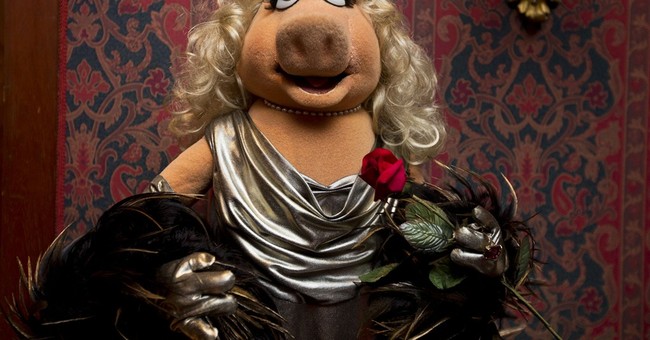 You see, Ms. Clinton is a proud supporter of the Brooklyn Museum. She admires its high level of “service to the community,” like showcasing a painting of an African American Virgin Mary collaged with female derrières lifted from pornographic magazines and real elephant dung. “Breaking the Glass Ceiling" by Cristina Biaggi is yet another masterpiece in the Brooklyn Museum’s collection. The work features Clinton wearing a black mantle that she uses to enfold a group of women who she has purportedly empowered—much like the Virgin Mary is often depicted in sacred art.

From Clinton’s perspective, these artistic displays must not seem racist, sexist or hateful. She has said: “It is not appropriate to penalize and punish an institution such as the Brooklyn Museum that has served this community with distinction over many years.”

Most recently, Clinton stood mute as the Brooklyn Museum announced that Miss Piggy would receive its prestigious Sackler Center First Award. The Brooklyn Museum’s website declares: “The 2015 Sackler Center First Awards honors performer, actor, writer, and icon Miss Piggy, for more than forty years of blazing feminist trails with determination and humor, and for her groundbreaking role inspiring generations the world over.”

Miss Piggy is a puppet, unlike past recipients of the award who have been humans. She is a stuffed a toy hog bereft of brain and heart. In her forty-plus years of existence as a puppet, Piggy has been primarily played and voiced by men. In other words, Piggy is literally a puppet who depends on men for her life and voice. Which does not sound very empowering or independent.

There are thousands of real American women who deserve recognition for their courage, philanthropy or innovation. Instead, caricatures like Miss Piggy and Julia (Obama’s cartoon woman who magically gave birth to and raised a son without any form of father) are held up as role models by our political leaders.

It’s a bit ironic that the same women who idolize Michelle Obama’s muscular arms are honoring Miss Piggy—a gal who revels in unhealthy eating and fitness habits. Piggy is famous for her “Snackercise” plan—which prescribes working out by raiding the refrigerator.

Isn’t it interesting that Clinton’s beloved museum is honoring a female puppet with a quick temper and thin skin? When four Americans died in Benghazi and some members of Congress questioned Clinton’s competence as Secretary of State, she famously screeched, “What difference does it make? Likewise, Piggy is famous for screaming “Hi yah!” while throwing a violent karate chop.

I thought feminism was about motivating women to make their own way—without relying on men. Apparently, I thought wrong. “Who should ask whom out? As long as he’s paying, who cares?” and “There is no one on the planet to compare with moi,” are examples of Piggy’s classic parasitic lines.

Rather than empowering women to speak their minds and be proud of who they are, she encourages deceit. For example: "Love ... trust … honesty. If you love each other, then he'll trust you, even when you can't be totally honest with him" and “If you place an ad in the “Personals,” Moi has only one word of advice: lie.”

Overall, Piggy’s puppet character is very superficial (“There is only one gift you should accept on your first date: DIAMONDS”) and entitled (“If at first you don’t succeed, complain loudly until they give it to you”)—rather than sincere, competent and confident.

I’m calling out Hillary Clinton here and now. If you truly want to help women advance, then show them what it means to support themselves on their own without deceit; without becoming a puppet for a man (i.e. standing by Slick Willie and using him to advance your own political career); and without making everything about you.

Otherwise, Miss Hillie, you don’t care about women. You only care about buying their votes. Like Miss Piggy, you put “moi” first. You fight dirty—throwing metaphorical karate chops in the air when things don’t go your way. Well, now you are exposed. Hi yah!