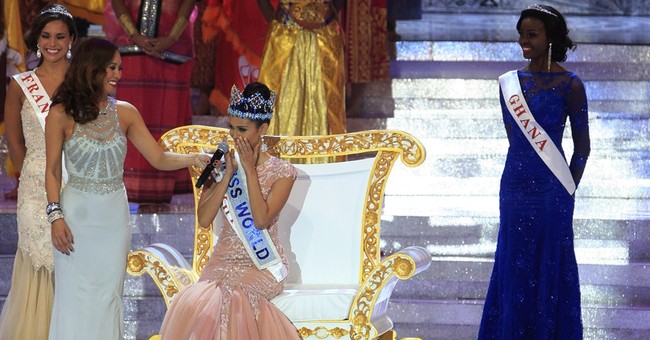 A confident woman who speaks her mind is a powerful force for good, and newly crowned Miss World Megan Young is unafraid to speak her mind on sex, marriage and life.

One month before she was crowned Miss World, Young was interviewed by the local television network ANC. She told the host: “I’m pro-life, and if it means killing someone that’s already there, then I’m against that of course. …I’m against abortion.”

ANC Host: What about contraception?
Young: “Well, I don’t engage in stuff like that as of now. I think that sex is for marriage.”

Host: Wow! Very good! Ok, divorce?
Young: “I’m actually against divorce because I’ve seen, of course, that in my family. So, I think that if you marry someone, that should be the person you should be with forever.”

Host: Now a woman as gorgeous as yourself, how do you say ‘no’ to sex?
Young: “You just say ‘no.’ That’s it. I mean, if they try to push you, then you step away because you know that that person doesn’t value you; doesn’t value the relationship as much; and if the guy is willing to, you know, to sacrifice that, then that means a lot.”

It is so refreshing to see a young, high-profile woman take a stand with complete confidence on her values, just as it was refreshing to hear Super Bowl champion Matt Birk speak out on life.

During the competition for Miss World, Young stressed her desire to stand by her “core values” and lead others toward social unity. Her integrity and willingness to stand by her beliefs attracted the judges’ attention. Although she was not as tall as many other contestants (Young is 5’7’’), she came out on top by (in her words), “thinking tall.” We all need to think tall. By speaking our minds with calm confidence, we can influence others in a positive way, just like Young.

Another example of gentle words that change the world are the words of everyday Americans who volunteer their time to pray and counsel outside abortion clinics across the country. In Minnesota alone, sidewalk counselors with Pro-Life Action Ministries have saved the lives of 90 babies so far in 2013 and a total of 2,900 babies since the organization was founded. These counselors peacefully stood outside of abortion clinics and offered counseling and brochures to young women who were about to abort their babies. As a result, they successfully convinced thousands of mothers to change their minds and keep their babies. They prayed for and offered encouragement to young, frightened and overwhelmed women whose boyfriends or family members were pressuring them to commit abortion. They also directed young women to pre-natal care, financial resources and adoptive resources that could help them manage their pregnancy.

Young women who face an unplanned pregnancy often feel like they are all alone. They do not realize what their options are, or they feel pressured to choose abortion because it seems like the best option available. They are unaware of all the pro-life doctors, nurses and ultrasound specialists who will volunteer their time to help them keep the baby themselves, or give it up for adoption. They also do not realize the negative health consequences, both physical and psychological, that can come from an unnatural delivery that ends in death.

Speak your mind with confidence and kindness like Miss World, Megan Young, and you will touch hearts.