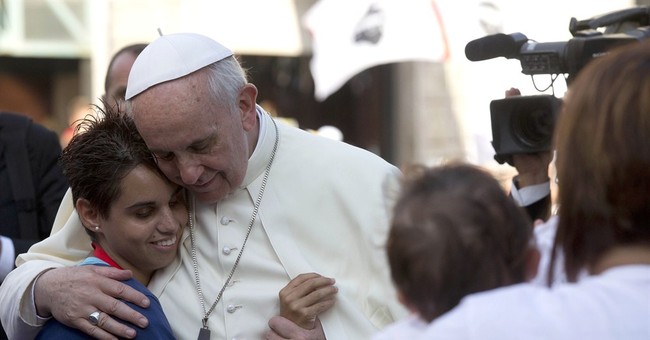 Every time Pope Francis opens his mouth on gays or women, journalists twist his words. Why?

In this country, we believe in free speech and religious freedom, as expressed in the First Amendment to the U.S. Constitution. It is concerning that journalists, whose livelihood depends on free speech, constantly run headlines distorting the Pope’s words and thus attacking religious free speech.

These journalists don’t even realize that when they distort Pope Francis for profit (wild headlines make money), they hurt themselves by chipping away at freedom. Journalists are not pastors. Why can’t they be content to let people express their faith for God as they see fit?

Recently, the Pope said this: "When I meet a gay person... If they accept the Lord and have goodwill, who am I to judge them? They shouldn't be marginalized. The tendency [to homosexuality] is not the problem ... they're our brothers."

The Pope’s words sound very loving and Christ-like without endorsing gay behavior in Catholic priests. Here, the Pope is conceding that he, as a human being, cannot judge another human being’s heart. The Pope is articulating the Catholic belief that only God can judge our hearts and we are all brothers and sisters, made in the image and likeness of Christ.

Pope Francis also recently excommunicated a priest named Father Greg Reynolds and TIME ran a sob story, giving former-Fr. Reynolds the chance to call the Pope “inconsistent.” Actually, the Pope was being quite consistent. Catholic priests take a vow of celibacy. It would not have mattered if Reynolds were gay or heterosexual.

The Catholic Church expects its priests to honor their commitments. If Reynolds wants to be a different sort of pastor, there are many other religions where he could do so. He did not need to take a vow of celibacy; he chose to.

Another Pope Francis line that the media loves to twist, is the line below, to say that the Pope believes women should be priests:

“We have to work harder to develop a profound theology of women within the Church. The feminine genius is needed wherever we make important decisions.”

Here, the Pope is holding women up as the powerful leaders that they are, welcoming them into the Catholic Church, and asking others to do likewise. First, if Pope Francis believed women should be priests, he would explicitly say so. Second, being a “priest” would not glorify women in the way that Christ glorified women:

One of Jesus’ favorites was Mary Magdalen. The Pharisees looked down on Magdalen as a “sinner” (Luke 7:39) and thought Jesus should shun her. But Jesus loved Magdalen and admired her enormous humility, repentance and faith. He let her kiss his feet and told the Pharisee named Simon:

“Dost though see this woman? I entered into thy house, thou gavest me no water for my feet; but she with tears hath washed my feet, and with her hairs hath wiped them.” (Luke 7:44)

Jesus held Magdalen up on a pedestal as a woman of superior virtue, as he did with his mother, Mary. He did not make Magdalen an “Apostle.” In a sense, he raised her above the Apostles. After he died and rose, Christ appeared to Magdalen outside the tomb. He honored her with this very special visit and entrusted her to tell the Apostles what she had seen instead of appearing to the Apostles himself. That tells you how highly Christ held Magdalen.

The Apostles Mark, Luke and John permanently transcribed Christ’s high esteem for Magdalen in their gospels for all those who have ears to hear and eyes to see. John writes how the Apostles listened intently as Magdalen told them: “I have seen the Lord, and these things he said to me.” (John 20:18) The way Mark, Luke and John write about Magdalen is feminist—if feminists want to pay attention. Even at a time in history when men dominated, the male Apostles had no problem proclaiming how they viewed women like Magdalen as equals in holiness and leadership.

Christ did not reward faith and love with “leadership titles” as we do here on earth. Rather, he rewarded faith and love with eternal happiness, as he told the repentant robber who hung next to him on a cross: “Amen I say to thee, this day thou shalt be with me in paradise.” (Luke 23:43)

Journalists who twist the Pope’s words should think about why they are obsessed with attacking the Pope’s right to express his faith. It is crucial to respect the right of Catholics to be openly Catholic and not watered-down Catholic, because this will ensure that we all continue to have the ability to express our beliefs in peace, whether we are Catholic or not. To remain free, we must let others say things we disagree with.