Kathryn Lopez
|
Posted: Feb 15, 2020 12:01 AM
Share   Tweet
The opinions expressed by columnists are their own and do not necessarily represent the views of Townhall.com. 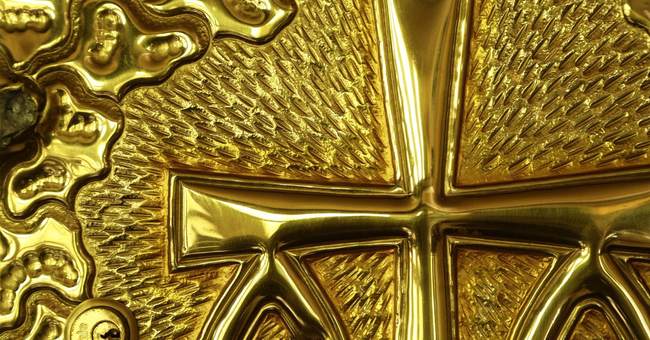 CHARLOTTE, N.C. -- There were women weeping in a chapel here. One named Veronica was something like inconsolable. She was talking about the crucifixion of Christ as if it was happening right then and there. She was feeling it. She was overwhelmed by the love of a God who would save humanity from the misery of sin and finality of death by coming into the world as a baby and dying such a brutal death.

Through their tears, women were giving thanks to God for a successful three-day mission here at America's largest Catholic parish, St. Matthew's, led by a group of largely lay missionaries called Hard as Nails.

The mission -- which is basically a retreat over a few days -- came just weeks before the start of the 40-day season of Lent, which prepares hearts for the celebration of Easter.

These women were particularly overwhelmed because Father Peter John Cameron, a Dominican priest who is the director of information at Hard as Nails and a well-respected writer and preacher, brought around a receptacle containing what Catholics believe is the real presence of Jesus in the Eucharist on the third and final night of the mission. This was the closest some of them had ever been to that Eucharistic presence -- usually they adore from afar. And the nearness of their Lord and Savior consumed them with really just about every emotion known to man.

The Pew Research Center has found lately that many Catholics don't believe that Jesus is literally present in the ancient rite of the Eucharist. That's not entirely news to me -- sometimes you can see it in how people approach the Mass or any tabernacle, in the casual ways with which we can sometimes regard some of the sacraments of the Church. But with an experience like this one at the mission -- that's a matter of faith that is going to be difficult to take for granted anytime soon. Truly confronting the truth of what you profess to believe can be a radicalizing experience in life, an opportunity for renewal and gift to the world around you. When the Beatitudes become your oxygen, when works of mercy become your marching orders, you can't just go through the motions of what you profess to believe.

Part of the goal of the mission lies at the heart of Hard as Nails' reason for existence: To make sure no one suffers alone. And is there any doubt that there is suffering everywhere in the world? Don't you see it everywhere you look? So, what can we do to make sure no one carries their burdens alone?

I first really got to know Hard as Nails when I spent time with its members at the commissioning of lay missionaries at the Shrine of the North American Martyrs in Auriesville, New York. And what has become clear to me interacting with them since is that their love of the Gospel could truly change things in our country and the world. There's both an urgency and a peace about Hard as Nails founder Justin Fatica. The urgency is the kind of restlessness Saint Augustine wrote about -- our hearts are restless until they rest in thee, God -- and it's also a keen sensitivity to the suffering that people experience in their lives, all around us.

Which brings us back to the women in the chapel. Their faith is not abstract to them. Their faith is not a safe harbor in a storm. Their faith is the reality of a God who intervenes in the world, who is a revolutionary force of goodness. Their lives have meaning because they were made by and for a loving God. And knowledge of that changes everything. The mission of the people who experience an encounter with Jesus is to share that love with everyone they meet. Wouldn't that be something if all Christians did this? Wouldn't that change things?