Kathryn Lopez
|
Posted: Nov 02, 2019 12:01 AM
Share   Tweet
The opinions expressed by columnists are their own and do not necessarily represent the views of Townhall.com. 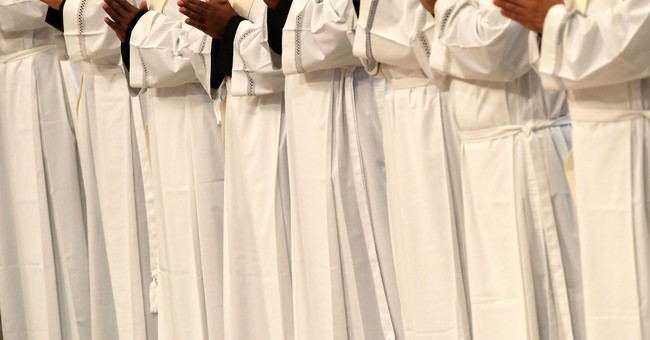 It was something like 12:30 in the morning on the first of November when I noticed the man across from me on a delayed flight from Florida to New York making the sign of the cross. He was a tough-looking fella, and while I was delighted to know I wasn't the only one praying in the turbulence, it also struck me as confirmation that this being tossed right and left and dipping and dropping in the air was not a good thing.

We (obviously) survived, and the pilots made an amazingly smooth landing, considering the strong winds, but was it unsettling! I travel a good deal, and this was by far the worst I've experienced. It put some things in perspective.

Before the scare, I was reading a new book by Cardinal Timothy Dolan of the archdiocese of New York. Sometimes I think of him as America's pope, inasmuch as he's probably the most well-known U.S. Catholic official at the moment, by virtue of his position and his talents -- TV is something he feels comfortable on, and he makes other people feel natural about it, too. So, it was no big surprise that when his new book came out, some of the morning news/talk shows had him on. The one I watched before my rocky flight was "CBS This Morning," which made me extremely sad, because it was this tremendous missed opportunity.

Cardinal Dolan's book is called "Who Do You Say that I Am?: Daily Reflections on the Bible, the Saints, and the Answer That Is Christ." It's a daily devotional, which I was reading in a very non-traditional way, skipping in and out in one sitting.

So, about the interview: Although the hosts had the cardinal on to talk about the book, they barely mentioned it; the course of the interview was about scandal, controversy and sex. This is nothing new to Dolan, so he was clear and strong, all the while conveying some real Christian hope and joy, as he does, even in the midst of great challenges. One of the things I like about the book is that while others have written important works addressing the suffering in the Church -- my friend Father Thomas Berg (who I ran into on the much smoother plane ride down to Florida) and Bishop Robert Barron wrote two very good recent ones -- Dolan's was an attempt to get everyone back to fundamentals. Sin happens when we fail to live up to our ideals, because, perhaps, we have forgotten who God is. So, of course, the question is posed by God: Who do you say that I am?

Dolan writes: "A good question to ask ourselves on reflecting on our lives and our eternal goal is: 'Who or what dominates?'"

For the Christian, it should be Jesus. But it is often something else.

As Dolan has it: "We need to say: 'Jesus, I need a Savior. I can't save myself. I want you to dominate and have dominion over my life ...'"

And we need to say that not just when we're in an airplane feeling completely out of control and desperate!

There are lots of legitimate and important questions about the state of the Church and the world today, and Cardinal Dolan has no problem addressing them; it's part of his job. But there are deeper, more important things that we need to be reminded of. That's what the cardinal is trying to help with the book. Whatever your creed, whatever higher power you turn to in times of extreme stress, don't miss the opportunity for spiritual growth. It stretches the heart and makes us better, and it improves the people and the world around us, too.

(Kathryn Jean Lopez is a senior fellow at the National Review Institute, editor-at-large of National Review magazine and author of the new book "A Year With the Mystics: Visionary Wisdom for Daily Living." She can be contacted at klopez@nationalreview.com.)

Wait...That's How Many Students Had a Problem With Dave Chappelle When He Visited His Alma Mater?
Townhall
David Frum apparently sees the wisdom in Hitler's policies in Nazi Germany (just substitute 'unvaccinated' for 'Jews')
Twitchy
AOC Attacks Brett Kavanaugh but Gets Laid out by Tara Reade
Redstate
The Morning Briefing: Democrats' Lust for Baby Killing Is Really Creepy
PJ Media