That's The Power Of Love

Kathryn Lopez
|
Posted: Apr 28, 2018 12:01 AM
Share   Tweet
The opinions expressed by columnists are their own and do not necessarily represent the views of Townhall.com. 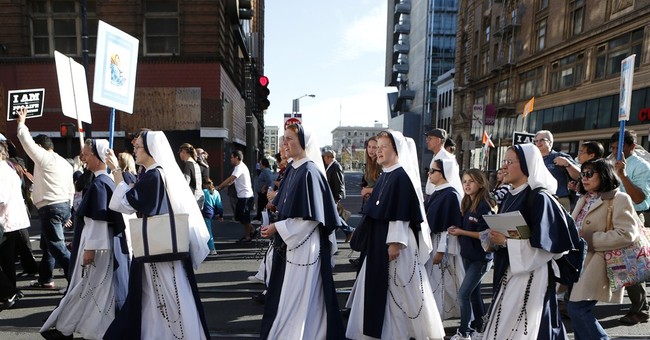 Rob describes himself as a "super pro-life guy." After marrying Yalixa, he found himself learning about the two abortions she'd had. Rob also describes himself as someone who loves God, and God kicked into high gear when Yalixa began sharing her pain with her husband for the first time.

"I've read a billion books, I have all these pro-life arguments, and here I am being told by God to shut up and just love her," he said. "You know? Just love her."

When people talk about being more like Jesus, this is what it really means. It means loving people when they are at their most vulnerable, so that they feel safe enough to be that vulnerable.

As Rob says: "There's no greater example of this than Jesus, of just sacrificing everything you are, and your life, and the things that you wanted to do for the good of someone else."

Yalixa found herself pregnant at 16. "I didn't know what to do. I was so afraid. I remember hearing other girls saying how easy an abortion was, and how you didn't have to be pregnant if you didn't want to. So, I remember thinking, 'Oh it's that easy. I don't have to be pregnant anymore.' I went through with the procedure, and I didn't tell anyone. I basically just forced myself to forget about it."

And then, a year later, at 17, she was pregnant again.

She recalls her thought at the time: "I have no other choice but to do what I did last time. I want to go to college. I have my whole life ahead of me."

It was 10 years later that she met Rob.

"I was drawn to Rob because he was a man of faith, and I really admired and respected that. I had left the church a long time ago, but meeting Rob made me think about my faith. I hadn't told him about my past, yet something about one of our first encounters made me want to go to Confession -- for the first time after 16 years -- to confess those two abortions."

After Confession, she said, "I still didn't feel completely healed. There was still something missing." Once she started to talk to Rob about it, she "asked him to tell me everything he was thinking and feeling. Reading and talking to Rob about my experience really helped me to pursue deeper healing."

The couple's story is told in an interview in a newsletter just out from the Sisters of Life, a community of women religious that was founded in New York 20 or so years ago and has expanded since to Colorado, Connecticut, Philadelphia, Toronto and Washington, D.C., to name a few places. Their life is spent serving God, women and babies, helping women like the teenaged Yalixa, who feel like they have no support. They have open ears and hearts, and embrace impossible situations to wrest hope and healing out of them.

Yalixa wound up at one of the Sisters' Hope and Healing retreats, where she realized "I needed to forgive myself in order to heal and to move on. That was the piece that was missing." She started going to monthly gatherings of women who had had abortions, who were seeking deeper healing. The "something that was missing" was being filled with hope and liberation. She credits God, and adds that "there's something so powerful and beautiful about being surrounded by women who have gone through the same thing. I love the sense of sisterhood that we have there. We've all been through it; we all get it."

Rob emphasizes: "If there's one thing that's prevalent in this world, it's that women in particular don't know their own worth. They don't know how much God loves them, how precious they are, or how precious is the ability to give life. That's something so unique, so powerful, and so beautiful."

Yalixa and Rob have children together now. Yalixa says their presence is a powerful source of ongoing healing. She feels a newfound confidence in her life as wife and mother, and says, "I've learned to appreciate myself, and I know that (God) made me beautiful. I am reminded of the goodness in life when I look at my children and when I see the world through their eyes. It keeps the hope and love alive. It keeps me going."

Hope and love are vital ingredients for life. There are so many hidden wounds from the past that scar hearts and can require miracles to be healed. Those miracles require something like the love and kindess that Rob felt God guiding him to on that day when Yalixa told him about her past hurt. It's something to model in the most intimate relationships, and in every encounter.