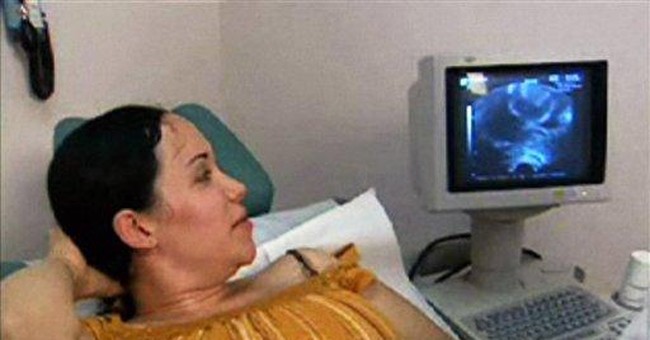 There's no doubt that Planned Parenthood and its supporters had a brilliant strategy: Get as many people as possible to repeat the word "transvaginal" in news and commentary stories, and accomplish two things: Defeat legislation at hand and make your opposition look like a freak show. That's what just played out with a bill in Virginia that would have required women considering having an abortion to get a sonogram first.

From a Washington Post piece about a protest against the bill:

"Molly Vick of Richmond said it was her first time to take part in a protest, but the issue was too infuriating and compelling."

What's infuriating is that we can't have an honest debate about anything that involves women, because it might make Planned Parenthood or any of the political or business wings of the abortion industry uncomfortable. This is the new feminist America, and it's just as delusional and duplicitous at the first round. It's not happening at anti-establishment protests, it is the establishment.

Even "Saturday Night Live" got into the frenzy, mocking the bill and the term of the moment in a recent sketch.

Go ahead and read the bill that caused the cries of "state-mandated rape." The word "transvaginal" never appears in it.

The bill was an update on Virginia's informed-consent law, which didn't require a particular kind of ultrasound, such as the intrusive procedure that drew mockery and outrage from the left. So doctors on site would be making the calls about what kind of ultrasound would be best for a particular women -- not the governor or the House of Delegates or the legendary exorcist Rick Santorum! And, frankly, even if the bill did mandate an invasive type ultrasound -- sometimes the age of the fetus or other circumstances will call for it --it wouldn't have been state-sponsored rape. It's standard medical care. All things in the OB-GYN world tend to be invasive. Are routine exams rape, too? Can we just drop the nonsense already?

I guess not. Not when those who resort to the most shameless rhetoric end up winning. At least in the eyes of current history, the chattering class is fully engaged in a self-righteous spin cycle about those right-wing hypocrites who claim to be about small government but who instead were "literally trying to insert themselves into women's bodies," as one talking head explained, echoing many more.

It's hard to make sense of the whole ugly Virginia incident other than to understand that critics of the bill as a matter of principle don't want anyone to be reminded of what exactly is done in an abortion clinic. No one went into a frenzy because of an ultrasound itself -- they're already being done in Planned Parenthood clinics around the state for the sake of efficient abortions.

The real reason everyone -- from protesters in Richmond to TV writers -- is upset is because women will be offered the chance to look at an ultrasound. And that's a threat to the abortion industry. A glimpse behind the scenes of this fight shows that while these critics of the bill talk about women's health, they don't really have that in mind at all.

A few weeks ago, the Susan G. Komen Foundation, a group that's really dedicated to women's health -- its mission is to stamp out breast cancer -- dared to attempt to sever its relationship with Planned Parenthood. It wasn't an unreasonable option, given the controversy that the group has attracted and considering that Planned Parenthood's agenda only tangentially aligns with Komen's. But, according to former Komen vice president Karen Handel, Komen's effort at good stewardship was betrayed by a Planned Parenthood drive that leaked the story to the press and launched a "well-orchestrated, vicious campaign." We are seeing a culture of death strengthen its foundations. We let bullies have their way with public policy, nonprofits and their corporate sponsors. When the federal government has told religious organizations that they must violate their deeply held beliefs by providing birth control to employees -- and the religious groups are then mercilessly ridiculed, dismissed and discredited, whatever the facts, we have a problem.

The SNL segment ended with a proclamation: "Don't tell me what to do." My sentiments exactly.