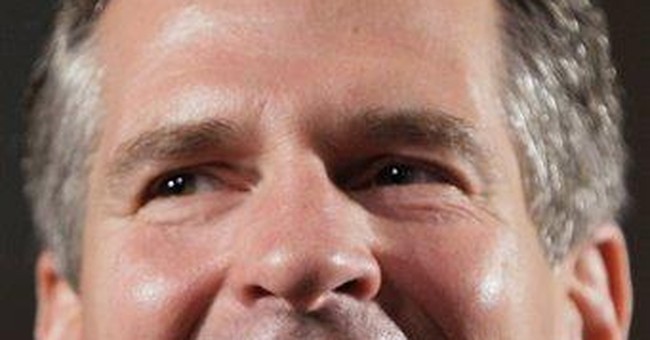 It's a wild political climate out there. In keeping with the blistering heat afflicting previously ultra-safe incumbents, a happily, comfortably retired Queens businessman by the name of Bob Turner thinks he can unseat his Democratic congressman, six-term Rep. Anthony Weiner, in November. It's a long shot, but crazier things have happened. Just ask Sen. Scott Brown.

Running for office was the furthest thing from Turner's mind when he was watching Weiner on Bill O'Reilly's Fox News show one March night. But, as Democrats were forcing their unpopular health-care revolution through the legislation machine, Weiner didn't even have the decency to answer his interviewer's questions. Weiner's "dodging" made Turner "hostile." So he went to his neighbor, Michael Long, who happens to be chairman of the Conservative party in New York, and asked, "To whom do I send a check?" No one, was the answer. There was no one challenging Weiner. So Turner pressed on, asking what could be done about that. Long, sketched-out prerequisites -- "Someone who isn't working," "Someone who has enough coin to start the ball rolling," and so forth.

Thus Turner asked his wife of 46 years, Peggy, what she'd think of his running for Congress. A talk-radio junkie, the special-needs nurse immediately became his biggest cheerleader: She was in a state of outrage about the undemocratic transformation going on before her eyes. And so "Bob Turner for Congress" was born.

Turner, who spent 40 years in media and business, is determined: writing his own policy statements, doing his own media, not shying away from the hard work of the campaign trail. The "business background helps," he says, of his effort to get voters to know someone is running against Weiner at all. His campaign "is not a gesture," he insists. He's in it to serve as congressman. "Plan A is to win. Plan B is to team up with likeminded people once I get to Washington." Deeply worried about the unsustainable nature of current federal spending, as well as the vital national-security and moral threats to our future, he wants Washington to make sense.

Turner is convinced that his zeal is shared in the Ninth District of New York (and around the country). Brooklyn and Queens may not seem like prime Tea Party territory, but their residents are living in the same country and feeling the same economic and other frustrations as the most pro-Palin gladiator. It's a concern about America's future and very identity that Turner hopes he can latch onto for the heart of his campaign. He has outdoor advertising and mailings planned, but he insists that the core of the campaign is going to focus on getting a "buzz" started at kitchen tables around the district, phone calls, knocking on doors and new media.

Of course, in 2008, President Obama took nearly 80 percent of the Jewish vote. But an April poll from McLaughlin & Associates found the president's Jewish support eroding. Could Anthony Weiner be a casualty? Turner's run, pollster John McLaughlin says, is "interesting timing as Jewish voters are very upset with the Obama administration's antagonism to Israel." While Weiner is seen as staunchly pro-Israel -- even defending it in the recent flotilla incident -- Turner accuses Weiner of "talking out of both sides of his mouth" and uses the flotilla incident as a conspicuous example of Weiner's lack of leadership: "He condemned Turkey, not our policies toward Turkey. Turkey is a pretty easy target." While attacking Turkey "may seem the pro-Israeli position," Turner says, Weiner "leaves the administration alone, in an attempt to keep the political heat off himself."

In this climate, the result of "Congressman Bob Turner" is, the Conservative Party's Long insists, "not impossible." "If you called me a year ago I would have told you no way Chris Christie could win," he humbly recalls. Christie, the Republican governor of New Jersey, is now being celebrated, even talked up for higher office.

Bob Turner, mind you, has no such aspirations, or delusions. He looks ahead and says that as a potential congressman, "I will have a job to do. I want to do it and get the hell out."

"My jaw a little bit dropped," Long tells me, when Turner told him he'd be the guy the voter who is frustrated with Weiner could send a check to." He's "the last guy I would have suspected was going to run for Congress." But he's got "passion about what's going wrong in the country. He's not doing it for himself. He clearly is a citizen candidate."

Turner would be quite a change for his district. The 2010 edition of The Almanac of American Politics describes Weiner's "lust for the media limelight," likening his eagerness "to appear on cable talk shows" to that of his mentor, Sen. Charles Schumer. That Weiner is more interested in responding to his former boss than to his constituents, is one of the commonplace complaints Turner says he's hearing from voters.

Turner, Long says, is "standing up to one of the giants." He confidently predicts: "I think the giant is going to be taken down to size."