Truth From a Beauty is All Ye Need to Know 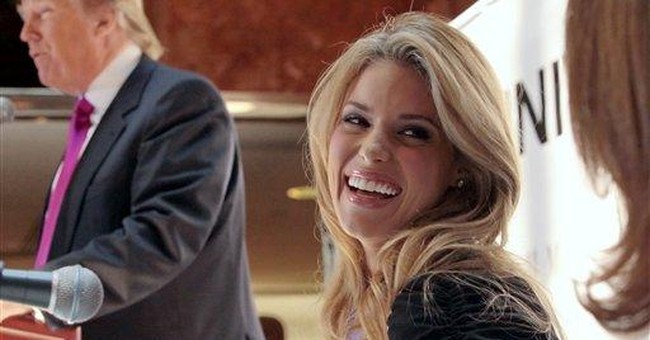 It's an odd day when Donald Trump becomes your hero. But that's the new light I see him in, standing beside Miss California as she withstood the worst kind of public incivility, just for giving an honest answer to a question about a fundamental institution in American lives.

Truth be told, "hero" might be overkill. But Trump, for whatever his reasons, deserves credit for how he handled the Carrie Prejean controversy. Prejean, who was a runner-up in the recent Miss USA pageant (a stepping stone to the Miss Universe pageant), became a household name because of her opinion on gay marriage, which she gave in response to a question asked during the televised event.

But by the end of the story -- when Trump, who is co-owner of the Miss Universe brand, decided to keep Prejean on despite accusations of inappropriate activism and breach of contract -- due to previously unpublished semi-nude photos that were exposed (and overexposed) in the wake of her now-infamous answer -- it became about showing the lie of tolerance. And as Trump allowed Prejean to keep her title of "Miss California," he also defended free speech and said some true things rarely uttered by non-culture-warriors.

Forgiving Prejean for the pictures and affirming her comments, Trump said, "She gave an honorable answer. She gave an answer from her heart, and I think for that she has to be commended."

Never mind that Prejean's asserted preference for traditional marriage mirrors the majority in her home state, where gay marriage legislation recently met with failure, making her a particularly apt representative of California. Or that Trump, during his pro-Prejean press conference, highlighted what few others would dare to remark while caught in the media spotlight: Prejean's view agrees with President Obama's stated outlook.

Trump also noted that Prejean has "taken a tremendous amount of abuse, and really by some people who shouldn't be handing out abuse." Another way he could have put it: the self-appointed political guardians of "tolerance" aren't so tolerant, after all.

Shanna Moakler, co-director of the Miss California contest, took issue with Trump's call and quit her gig there after making her support for gay marriage well known in the weeks since the frenzy erupted.

Moakler's politics and own publicity strategy miss something here, however: though Prejean may hold different views than the liberal elite, she is nonetheless a role model. What happened on that Miss USA stage was wholly unexpected. But she rose to the occasion with conscience and grace. And, yes, she showed herself to be savvy, goal-oriented and aware, all traits of an ideal Miss Universe, according to the organization's Web site.

Is this story ridiculous? On one level, most definitely. We've been arguing about a beauty pageant, for goodness' sake. But that, too, is why it's so important. When asked, Prejean said: "I think it's great that Americans are able to choose one or the other. We live in a land that you can choose same-sex marriage or opposite marriage and, you know what, in my country and in my family I think that I believe that a marriage should be between a man and a woman. No offense to anyone out there but that's how I was raised and that's how I think it should be." A beauty contestant can't say that, in the most inoffensive way, without eliciting a firestorm and putting her title in jeopardy?

Carrie Prejean did not walk onto the Miss USA stage with an agenda. She was asked her opinion. And she gave it. It was what followed that was ugly. Trump, in his way, brought some real beauty back to the spotlight -- literally, but also shining a light on some fundamentals of American life and common decency that deserve a pageant of their own.