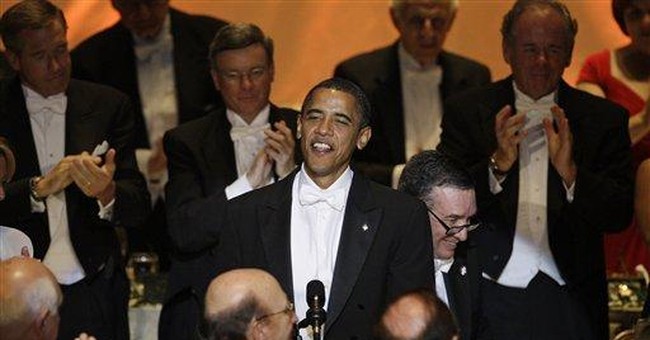 This Election Day could usher in a crushing blow to the American dream.

Within hours of meeting Joe the Plumber, Americans from all over the country flooded my inbox with their stories.

Joe the Plumber, as so many who watched the final presidential debate of the 2008 election know, is Joe Wurzelbacher, from Holland, Ohio, who wants to buy a small business but knows it's going to hurt under an Obama administration's tax plan.

Jarringly, when Joe told Obama of his worry during a campaign stop, the Illinois senator said, "It's not that I want to punish your success, I just want to make sure that everybody who is behind you, that they've got a chance at success, too. I think when you spread the wealth around, it's good for everybody."

(Yes, it turns out that Samuel Joseph "Joe" Wurzelbacher doesn't have a plumbing license. But Obama didn't know that when he responded. And the presidential candidate's response wasn't geared toward just one working-class guy from Ohio.)

The meeting created an opportunity for John McCain during that last debate, at Hofstra University in New York. By the next day, McCain was declaring Joe the victor. McCain said, during a rally in Downingtown, Penn.: "We had a good debate last night. I thought I did pretty well, but...the real winner last night was Joe the Plumber."

McCain continued, "Small businesses provide 16 million jobs in America, and Americans know that raising taxes on small businesses will kill those jobs at a time when we need to be creating more jobs." He moved to a rousing conclusion that clearly resonated with the crowd: "America didn't become the greatest nation on earth by spreading the wealth; we became the greatest nation by creating new wealth."

Meanwhile, another Joe, Democratic vice-presidential candidate Biden, said on "Today" that, "I don't have any Joe the Plumbers in my neighborhood that make $250,000 a year," referring to Obama's much-vaunted plan to increase taxes only for people making more than that amount. Following in the footsteps of MSNBC host Keith Olbermann, who, the night of the debate, declared that Joe the Plumber is McCain's "invisible friend," Biden implied that the concerned Buckeye water jockey didn't exist. A McCain spokesman shot back: "It is astounding that Joe Biden, the self-adulated 'everyman,' can't believe that an American making less than $250,000 a year might still be opposed to socialism."

The Obama-Biden campaign not only wants to make it harder for the Joes of the nation to be small-business owners, but Barack & Co. want to denigrate them for even aiming in that direction. There's something about that line -- along with that downright Marxist "spread the wealth" talk -- that would, on Election Day, deliver a decisive slap to this country's founding ideals.

Bobbi, wife of "Mark the Trucker," e-mailed me the morning after the debate. Her husband owns a small transportation business that he founded with one truck in 1978. She said that small businesses cannot usually deduct as a business expense money that is taxed as personal income. That puts most small business in a higher tax bracket than the one they would qualify for if only their real earnings were taxed. This higher tax bracket, indicating a wealth that exists on paper alone, has prevented their children from getting financial aid for college.

She continued: "Engines blow up, accidents happen, and the price of replacing an 18-wheel tractor or a specialty trailer is very expensive. My husband is taxed a higher rate on income that is really not income. He puts a large percentage of it back into his business, as I know most entrepreneurs do. We live on a modest percentage of what appears as 'wealth' to Senator Obama."

And the men who work for Mark get that and respect that, she believes. "They see how we live and they respect their boss because he pays a fair wage and does provide health care and contribute to their 401(k)s," she writes.

And so Joe's words spoke to Bobbi. "Joe is like my husband and his employees. They work hard and dream bigger. There are a lot of Joes and Marks out here, and they all don't own businesses yet, but they dream. They know less government is best government. And, Kathryn, they all vote Republican."

Mark, Joe, Bobbi and many McCain supporters look at the Democratic Party's tendency toward class warfare and want to make a flight toward freedom. I don't know if the Joe the Plumbers of America are going to win the election for McCain-Palin, but they have certainly installed the pipes that are bringing a refreshing flow of honest revelation in these last weeks before E-Day.