Who Let the Kitten In? 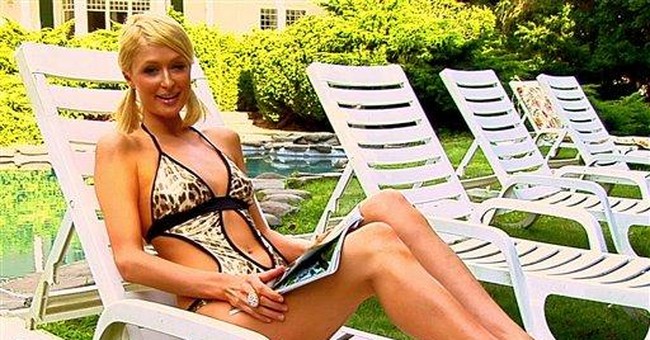 WASHINGTON -- A year ago, it was impossible to get through a day without some mention of Paris Hilton -- the ingenue famous mostly for being famous.

Oh, how we complained. Can't we please have just one day when we don't talk about Paris?! And then one day, America's prayers were answered. Not only did Hilton disappear, she vanished into a jail cell where she spent 22 days for violating parole.

When finally she did emerge, a repentant and humble Hilton claimed she had found God.

"I'm not the same person I was," she averred. "God has given me this new chance."

Who knew God's messenger would be John McCain.

With his recent ad trying to convey that Barack Obama is just another celebrity whose status is based on a thin resume, McCain effectively resurrected Hilton's career.

Familiar to most by now, the ad shows Obama before a cheering crowd, then the camera pans to Britney Spears and Paris Hilton. "He's the biggest celebrity in the world, but is he ready to lead?" asks the narrator.

Something about higher taxes and foreign oil got lost in the reaction to the ad's allegedly racist imagery. Apparently, a black male cannot be viewed in the same frame with white females without a suggestion of racist undertones.

At least that was my first response to the controversy.

As a white female, I saw the ad as simply dumb and beneath McCain. Too easy. Too cliched. We all get the celebrity bit. But upon further reflection, the ad was subliminally loaded.

It is a fact that few other faces -- black, white, male or female -- are as well known as Hilton's and Spears'. It's also a fact that few celebrities, if any, are as comparably well-known for gaining their status without much resume.

Their value as examples of celebrity is overshadowed by their sexual symbolism, in other words.

The first association upon viewing the ad might well be celebrity, but the second connection is surely sex. Despite racial progress in this country, the black man/white woman sexual taboo still burbles just beneath the surface of America's unconscious mind -- and easily roils to the top in some pockets where racism is still easily tapped.

Did McCain intend it that way? My sense is no, owing to McCain's own profoundly painful experience with a similar tactic in 2000 when his daughter was the target of an ugly racist attack. Push pollers placed calls in South Carolina saying that McCain's adopted daughter (from Bangladesh) was really his illegitimate black child.

Even if baiting racists would win him the election, it is highly doubtful McCain would allow it. But he did allow this ad, which, at the very least, showed poor judgment. A subsequent Obama-celebrity ad is missing the missies, but the damage has been done.

McCain's ad, meanwhile, was a gift to Hilton. Her video rebuttal not only is more clever than McCain's original, but she manages to mock the elder statesman. Seated on a chaise in bathing suit and gold heels, Hilton introduces herself: "Hi, I'm Paris Hilton and I'm a celebrity, too. Only I'm not from the olden days and I'm not promising change like that other guy. I'm just hot."

Because McCain put her in his ad, Hilton says she figures she must be running for president. So she presents her "hybrid" energy plan -- a combo of McCain's drilling and Obama's new technology. Something to tide us over until, you know, the problem's solved.

The unsolved problem for both McCain and Obama is they have too many people telling them what to do. Too many polls, managers and handlers later, they're losing their true selves. Both were once unique in different ways. Mavericks in their own time, they were original men who each had transcended challenging circumstances, if of different orders.

Politics has become so shallow that a poor little rich girl, America's icon of shallowness, can spoof a war hero and veteran U.S. senator and make him seem silly. Worse, Paris Hilton is back in the buzz.