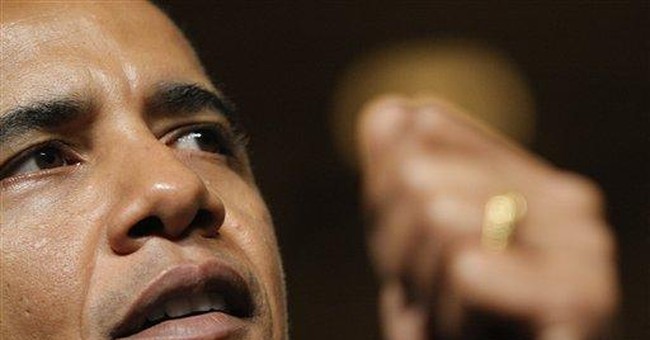 Oh, perdon. I was just tuning up for an interview with Baracko Obama and Juan McCain.

Juan y Baracko have been busy lately wooing los que hablan espanol. That is, people who speak Spanish. With an estimated 9.2 million Hispanic votes in play this November, the stakes are high. And the pandering is in high gear.

Both men have put out Spanish-language ads and both made appearances Tuesday at the national convention of the League of United Latin American Citizens (LULAC). Obama, however, seems to know something about the Hispanic soul that McCain doesn't.

Anyone familiar with Hispanic art and literature knows that poetry isn't only a genre. Poetry is in the DNA of this romantic, passionate people. Obama knows this language without speaking Spanish.

Thus, while McCain spoke PowerPoint about his economic plan -- creating jobs, stimulating small business, keeping taxes down -- Obama told stories of a little Hispanic girl stuck in a crumbling school building and a nursing mother torn from her baby during a government raid to round up illegal immigrants.

While McCain talked about clean energy initiatives as alternatives to foreign oil, Obama recalled a young girl named Cristina, who asked for Obama's autograph, then translated his comments for her non-English-speaking parents. It was in that moment that Obama, dream weaver and healer, realized that Americans have nothing to fear but fear itself -- "that for all the noise and anger that so often clouds the discussion about immigration in this country, America has nothing to fear from our newcomers. They have come here for the same reason that families have always come here ... in the hope that here, in America, you can make it if you try." (Cue Jimmy Cliff: "You can get it if you really want.")

The danger to the American way of life isn't that we'll be overrun by those who look and speak differently, said Obama. "It will come if we fail to recognize the humanity of Cristina and her family -- if we withhold from them the same opportunities we take for granted."

Suddenly, we're all feeling so loving toward Cristina and so worried about the nursing baby and the little girl in that lousy school building that we forget that Americans have legitimate concerns about how those children got here.

Are those 12 million people "hiding in this country" because paranoid, xenophobic Americans fear people of different colors who speak other languages, as Obama implied? Or, are they hiding because they came here illegally? Does that matter?

By all means, let's frame the immigration debate in humanitarian terms, but preaching unity will only get us so far. Grounding the soaring spirit of e pluribus unum is a terra-firma rule of law that has to be reckoned with. And it is helpful if all concerned can read and comprehend the law.

The key to achieving that goal, obviously, is that everyone speak English. Yet, speaking at a town hall in Georgia recently, Obama said that "instead of worrying about whether immigrants can learn English, they'll learn English, you need to make sure your child can speak Spanish."

Americans certainly could benefit from learning other languages for numerous reasons, including job competition in a global marketplace. But such rhetoric obscures the detail that millions of immigrants do not learn English in part because government accommodation makes it unnecessary. Drop by Little Havana sometime and ask for directions.

Non-English-speaking people, meanwhile, do not fare well in this country. Rendered effectively mute by ignorance, they are condemned to menial jobs, low wages and dim futures. Immigrants need to learn the language of our government and business so that they may prosper, but also to prevent our becoming balkanized and less inclined to understand each other.

One nation under English is a necessary step toward true assimilation. Encouraging anything less, even in the name of compassion, ultimately will keep Hispanics down. And dependent -- just the way some people like them best.

Some poetry, alas, is just doggerel.