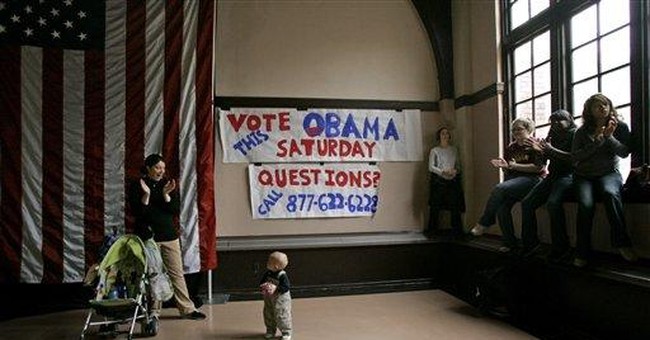 Let's hope aspiring democracies everywhere are paying close attention as Americans select the next leader of the free world.

So many lies, so little time.

The beauty and bane of our multimedia world is that anyone can say anything about anyone and create an impression nearly impossible to correct. As an English Baptist preacher (but not Mark Twain) once perfectly said: "A lie will go round the world while truth is pulling its boots on."

And that was long before the Internet. Today, lies are on their third lap around the globe before truth can hit the snooze button.

Thanks to technology, a single individual with a laptop can organize what seems to be a groundswell, a grass-roots movement, an outcry. One such individual is Robert Morrow, a self-employed securities trader in Austin, Texas, who isn't fond of Hillary.

I got a call from ol' Robert Thursday as I was writing this column at my home in South Carolina. He -- or rather his recorded voice -- reminded me of Bill Clinton's well-known history and Hillary's supporting role. The point of the message was to question: Can you trust her?

That's a legitimate question about any candidate, but Morrow's complaint consists in part of claims that can't be proved or (ever) adequately denied. Sow seeds of doubt and the plant takes root, no matter what a candidate -- or a truth squad -- says. Some lies, moreover, are so palatable, justifying some preconceived notion or ratifying a personal bias, that they're just too good to disbelieve.

Obama has been the target of one of the more sustained smear campaigns, alleging that he's a Muslim operative who refuses to recite the Pledge of Allegiance, that he was sworn into office using a Koran, and that he attends a racist, anti-white church in Chicago.

"Proof" is provided through whisper e-mails -- "Read this and pass it on" -- a high-tech rumor mill where ruining a person's reputation is as simple as hitting "send." In Obama's case, the e-mail often features a photograph of him standing on a raised platform with other Democratic candidates, including Hillary Clinton and Bill Richardson, in front of an oversized American flag.

All but Obama have their hands over their hearts. Proof that Obama's unpatriotic mind is wandering around Mecca, right? Except that the photograph, taken last September during a "steak-fry" for Sen. Tom Harkin of Iowa, captured a moment during the singing of "The Star-Spangled Banner," not the Pledge.

Nowhere is it written that one has to place hand over heart during the national anthem. Some do, some don't.

These and other smears against Obama have been thoroughly vetted by the fact-checking arm of the Annenberg Public Policy Center of the University of Pennsylvania (factcheck.org).

Fact: Obama put his hand on the Holy Bible, not the Koran, when Vice President Dick Cheney swore him into the U.S. Senate. Annenberg has the photo.

Fact: Obama pledges allegiance to the flag. Annenberg has the videos.

Nevertheless, though Annenberg's researchers indeed found evidence that Obama's church indeed is pro-black, they said, "Calling it 'racist' is, in our judgment, a falsehood.''

Space prevents dissecting all the allegations made in this campaign, but suffice it to say that no candidate suffers Pinocchio envy.

Voters, meanwhile, are left to wonder who, if anyone, is ever telling the truth? What about the truth squads? Even those are composed of partisans, many of them active politicians themselves.

Will the presidential nominee be the one who tells the fewest lies?

With so many versions of truth in circulation -- and so many sources of mis- and dis-information -- disillusioned voters would be justified in wishing a pox on all their houses. In the midst of this darkness, however, at least there's one thing of which we can be certain: John Edwards' father worked in a mill.