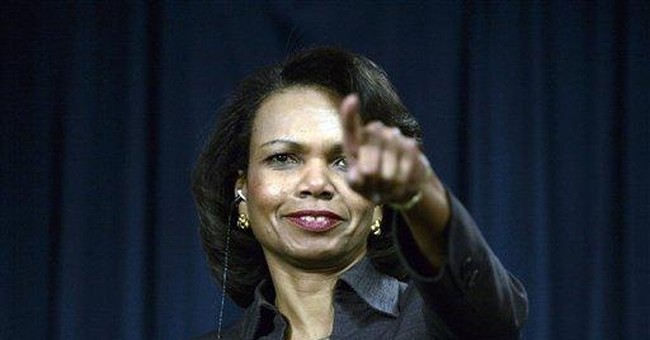 WASHINGTON -- As Democrats revel in the riches of diversity, they must also wonder at the cosmic alignment that produced both a minority and a woman as viable candidates.

A bonanza on the one hand; a bit of bad luck on the other. Someone, after all, has to lose.

Why couldn't it have been one or the other, but not both at once? Or best of all worlds, both in one person?

Alas, Condi Rice is a Republican and she's still not running for president. That hasn't stopped Crystal Dueker, a 50-something volunteer from North Dakota, and Rich Holt, a 20-something African-American attorney from Pennsylvania, from trying to make Condi run.

They have changed their goal since the fall, however, from president to vice president Rice. Dueker, communications director for the 527 group she formed, "Think Condi," travels around the country at her own expense in a van covered with Condi stickers.

Her luck ran thin when she was focused on the Oval Office, principally because Rice wasn't running. No problem. Dueker simply adapted.

Today, she and about 10,000 Condiacs across the country are hoping Rice will be the veep pick for whatever white male gets the GOP nomination. Anyone will do fine, says Dueker, as long as he mounts the convention stage come September and announces that he wants Condi by his side.

Asked whether Rice's record with the Iraq War and her close association with George W. Bush might be a negative for the GOP ticket, Dueker insists that voters think of Rice in terms of her role as secretary of state. She recites a catalogue of diplomatic accomplishments.

You'd think Dueker were a Rice employee, though the two have never met. Dueker hinges her hopes that Condi would accept a vice presidential run on a brief comment from a 2005 interview with NBC's Tim Russert. When asked whether another Web site (not Dueker's) supporting Condi for president should be removed, Rice defended the group's free-speech rights.

For Rice's ardent fans, that was as good as a wink and a nod, a subliminal signal that she would ride out when the time was right.

For all their unappreciated efforts, including a Web site that is, shall we say, a work in progress, Rice's followers may not be delusional after all. Rice would be a formidable partner, if not necessarily in the traditionally political sense. She doesn't bring an important state to the dance, but she does bring race and gender.

As an African-American and a woman, she neutralizes the two Democratic front-runners. That race and gender shouldn't matter goes without saying, except that the candidates -- or their surrogates -- have made the campaign at least partly about putting a black man or a woman, both firsts, in the White House.

Rice also brings foreign policy experience that can't be matched by any of the front-runners of either party. Fluent in Russian, she holds a Ph.D. in international studies and is an expert in Soviet military affairs. Not a bad resume item in an era when Vladimir Putin is so busy flexing his muscles that he can't seem to keep his shirt on.

A former provost of Stanford University, she also served as national security adviser during George W. Bush's first term. Since becoming secretary of state, she's busied herself trying to advance democracies in the Middle East and, recently, getting Palestinian President Mahmoud Abbas and Israeli Prime Minister Ehud Olmert to sit down together.

That she's failed to perform miracles places her in the good company of nearly everyone else who similarly tried with little success to combine the words "peace" and "Middle East" in the same sentence.

Finally, she's attractive, well-spoken and can play a mean piano sonata. We have done much worse in selecting co-stars for the presidential drama.

Dueker, who plans to set up a booth at next month's CPAC (Conservative Political Action Conference) in Washington, says an internal poll by Zogby International found that 41 percent of Republicans thought Rice would bring "excitement" to the presidential ticket.

The question is whether Condi is feeling the love.