The Perils of Pandering 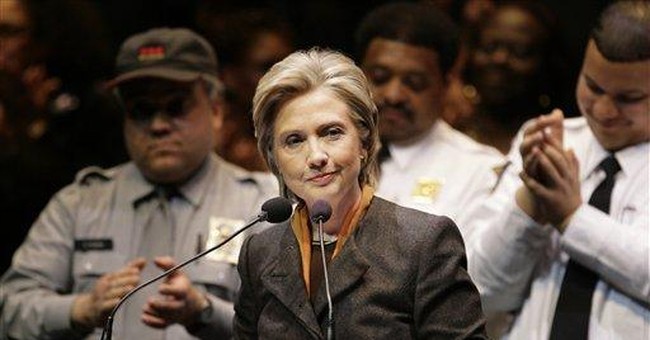 It's not about race or gender, we keep hearing from the Democratic front-runners. Except of course it is about race and gender, even though both should be rendered irrelevant by virtue of the candidates' participation in the game.

Simply put: Identity politics is predicated on oppression. Yet it's hard to claim you're a victim when you're on top.

Both Barack Obama and Hillary Clinton -- Ivy League-educated U.S. senators -- can't win for winning. Yet both have crafted their candidacies around the idea of overcoming historical obstacles and becoming firsts of their kind.

To cross that final frontier -- to become the first woman or the first African-American to be nominated for president -- each has to artfully tear down something of what their party has built up. Unavoidably, the white has to go after the black; the man has to attack the woman.

How to do that without inviting charges of sexism or racism is the trick and, thus far, Obama seems the better magician.

Matters are further complicated by the fact that Obama's attraction to black voters cuts a swath through a field the Clintons have been carefully cultivating for decades. No matter how many black church services they've attended, they can't compete on the pulpit with a real African-American candidate.

Despite their protests to the contrary, both Obama and Clinton have been playing to their respective demographics. Obama hasn't overtly made his campaign about race, but he didn't have to. In Clintonian tradition, he has let surrogates make the case for him. Oprah Winfrey laid it out plainly enough when she told a throng in Columbia, S.C.:

"We don't have to just dream the dream anymore. We get to vote that dream into reality. I believe that now is the time for somebody like Barack Obama."

"Somebody like Barack" and "the dream" don't require much elaboration. The dream was the Rev. Martin Luther King's, of a future when blacks and whites lived in harmony. And though Obama is unique in his broad appeal, Winfrey was clearly urging voters to put an African-American in the White House.

Except when she is urging women to vote for her because she's a woman. Speaking at her all-female alma mater, Wellesley College, Clinton called upon women to rally against "the all-boys club of presidential politics. We're ready to shatter that highest glass ceiling."

Obviously, and gratefully, Clinton will accept the woman vote and Obama will accept the black vote while professing a unified, color- and gender-blind vision. But to win, each has to borrow from the other's camp -- Obama needs women and Clinton needs blacks.

And each risks losing the prize by going too negative, as Clinton recently learned when she dared trespass on the sacred territory of Dr. King. In trying to neutralize Obama's success as an orator and underscore his short list of accomplishments, she effectively said that Obama is no King.

Then she went too far and, noting that no matter King's own contributions, the Civil Rights Act required the signature of a president, in this case the Democrat Lyndon B. Johnson.

Whatever she meant -- fair or not -- that's a hole deep enough to bury Hillary's nomination and her husband's legacy.

We can be certain that Obama's surrogates will milk that mistake even as he and Clinton declare a public truce. And Clinton will continue to insist that she's not interested in defining her campaign as a gender issue even as she continues to invoke the glass ceiling, as she did yet again Sunday on "Meet the Press."

In the end, the Democratic Party may be hostage to its own noble intentions. By co-opting equality as their party's identity and making victimhood their rallying cry, the battle for race and gender necessarily has become a fight between race and gender.

If a Clinton victory is viewed as a victory for all women, then her defeat can only be viewed as a defeat for women. The same goes for Obama and African-Americans.

It shouldn't be about race and gender, but it is. And the Democratic Party made it this way.