Real March Madness: The NCAA is a Joke of a Non-Profit

Kami Mueller
|
Posted: Mar 16, 2017 12:01 AM
Share   Tweet
The opinions expressed by columnists are their own and do not necessarily represent the views of Townhall.com. 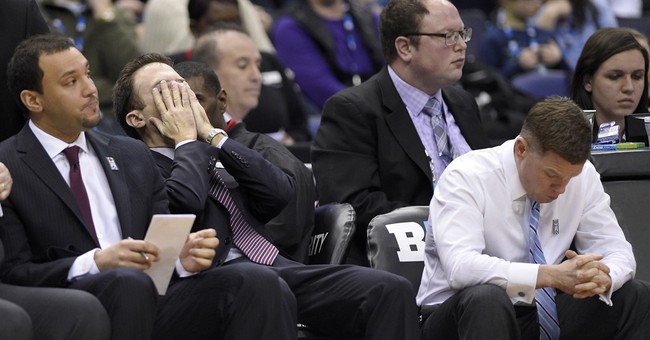 All across the country, folks are frantically filling out their bracket picks, joining their ESPN online groups, and talking smack to their competitors and foes through their ESPN profiles. It’s undeniable—March Madness is upon us, but the madness is far more.

The NCAA, which is a 501 c3 non-profit, receives funding in subsidies by the federal government, and enjoys a near monopoly on college athletes.

I played Division I Women’s Golf during college, and let me tell you—the life of a college athlete is hard. It’s an often thankless job. Athletes across the nation wake up before the sun to hit the weight room, abide by strict dietary rules, spend countless hours honing skills and mastering their craft, and perform at unbelievable levels of excellence.

What could inspire this kind of commitment? For many athletes like me, the lure is athletic scholarship money. These scholarships may appear to help, however, the juice isn’t worth the squeeze. If I had been paid a minimum wage rate for every hour I planned my diet, spent at the gym to get stronger, invested on the driving range and on putting drills, and traveled to and from events…. I would have easily been paid over $30K a year—and more if overtime rates were considered.

Let’s go ahead and call the NCAA what it truly is: modern-day serfdom.

And that’s not even the worst of it— cue the REAL March Madness.

The NCAA is about one thing and one thing only: MONEY. Legally, the NCAA is required to abide by the reasonable parameters dictated by their tax-exempt, non-profit status. However, they have figured out the world’s most impossible riddle; how to take copious amounts of government funding, without ever paying taxes. Touché, NCAA.

Let’s walk through the many aspects of the NCAA’s hypocrisy.

Number one, because of their non-profit status, the NCAA is granted funding by the federal government in subsidies on the basis of their self-proclaimed mission.

Number two, the NCAA generates over a billion dollars revenue (untaxed) annually. We are talking BIG business here, and the evidence says it’s quite possibly the most poorly run business that ever existed. Depending on the year, the NCAA claims to filter 80-90% of their revenue directly into their Division I partners. Seems like they are a real Robin Hood, giving their profits to colleges and universities that are shaping the minds and athletes of tomorrow, right? Wrong. On average, more than half of these “partners” are operating in the red. In other words, they are spending far more than they make, wasting cash without accountability— and the NCAA could not care less. I suppose if I was exempt from paying taxes and made a billion dollars a year, I would probably not care less, either.

Number three; tax-exempt non-profit organizations like the NCAA, for obvious reasons, have clearly defined limits to political speech. Makes sense, right? The distribution of taxpayer money by our elected leaders is held directly accountable by the people through the election process. But because the parcel of what would be taxpayer money, is kept by the NCAA due to their tax-exempt status, there is zero taxpayer accountability.

Why does this matter?

Last year, the city of Charlotte, North Carolina broke the law by passing an unconstitutional bathroom ordinance. Charlotte’s bathroom ordinance forced private businesses to allow men to enter women’s bathrooms, showers, and locker rooms with women and little girls. Yep. You read that correctly. The City of Charlotte forced private business owners to allow men to enter showers with little girls, at any time, for any reason, just because they feel like it.

The dangerous implications of an unenforceable and illegal ordinance had obvious statewide implications, so our state leaders took action to protect women and girls all across North Carolina. They passed a piece of legislation, known as HB2, which overturned Charlotte’s dangerous ordinance and returned our state to how it was prior to Charlotte’s reckless law-breaking.

When our leaders refused to play the NCAA’s game of extortion, the NCAA pulled out several Championship games that North Carolina was scheduled host. The NCAA far exceeded their clearly defined limits to political speech in North Carolina, and don’t be naïve to believe it will stop there.

Which leads me to number four…because athletes are unable to choose their athletic governing association, what the NCAA says, goes. If a current NCAA athlete were to bravely speak out against the NCAA’s desire to allow male athletes to shower alongside women, they would risk losing their athletic scholarship—or worse—their coveted spot on the team. It doesn’t take a genius to understand this injustice. The arrangement between the NCAA and their Athletes goes way beyond modern-day serfdom. The relationship starts to look a lot more like Master and Slave.

And finally, number five, to add to their hypocrisy, the NCAA helps organize and sort athletic teams on the basis of biological sex. So it’s rich (pun intended) that the NCAA chose to make their grand gesture of illegal political speech to shame states that follow their example in providing reasonable accommodations for men and for women. Perhaps the NCAA’s master plan is to eliminate biological sex entirely. Maybe the 2018 March Madness will debut one unified, unisex team, once and for all! Huzzah!

So what now? Must we all wallow in our watered-down beer and choke on our seven-layered Mexi dip in protest to the fullness of the NCAA’s REAL March Madness?

Nah—This is America. Beer and seven-layered Mexi dip should be cherished.

Instead, it’s time for Congress to put on their black and white striped polos on behalf of the taxpaying American people and for college students everywhere.

Blow the whistle on this technical foul.

The NCAA has earned themselves a good old fashioned Congressional investigation.

And it’s high time we give it to them.