Why the Supreme Court’s Janus Decision is So Important

Justin Haskins
|
Posted: Jul 02, 2018 12:01 AM
Share   Tweet
The opinions expressed by columnists are their own and do not necessarily represent the views of Townhall.com. 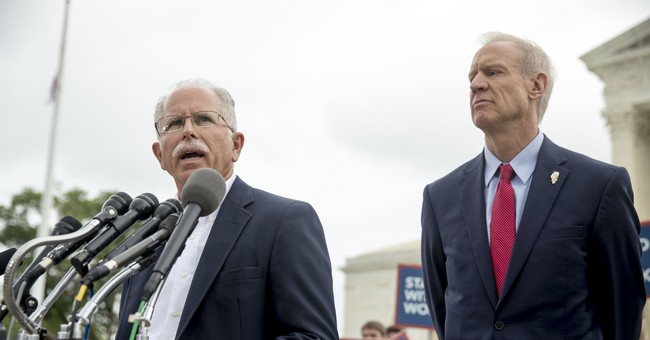 On Wednesday, the Supreme Court ruled in a 5–4 decision that public-sector government employees cannot be forced to pay unions “agency fees” as a condition of employment. This decision overturned the long-standing position of the court, outlined in Abood v. Detroit Board of Education (1977), stating that government employees could be compelled to pay unions money in part because public-sector employees benefit from the various activities of the unions, including collective bargaining.

In Janus v. American Federation of State, County, and Municipal Employees, Mark Janus an employee of the Illinois Department of Healthcare and Family Services, argued that he has a First Amendment right to choose not to pay public-sector unions. Janus, despite working for the government, refused to join the American Federation of State, County, and Municipal Employees (AFSCME) union because he believes the union promotes political causes he disagrees with, but despite this belief, Janus has been required to pay the union fees totaling about $535 per year.

Writing for the majority, Justice Alito agreed with Mark Janus, declaring, “In simple terms, the First Amendment does not permit the government to compel a person to pay for another party’s speech just because the government thinks that the speech furthers the interests of the person who does not want to pay.” This ruling overturns the Supreme Court’s decision in Abood and deals a significant blow to public-sector unions and their chokehold over millions of government employees across the country. Unions say roughly five million government employees in 24 states will be impacted by the court’s decision in Janus.

It's truly remarkable that in a nation that guarantees free speech rights, government workers have been forced by law to pay a portion of their paychecks to support the highly political activities of unions. As Justice Alito noted, “Compelling individuals to mouth support for views they find objectionable violates [free speech rights] … and in most contexts, any such effort would be universally condemned. Suppose, for example, that the State of Illinois required all residents to sign a document expressing support for a particular set of positions on controversial public issues—say, the platform of one of the major political parties. No one, we trust, would seriously argue that the First Amendment permits this.”

And yet, that’s effectively what has gone on for decades. Public-sector unions have for more than a half-century been dominated by leftists who have been more than happy to walk in lockstep with the Democratic Party. In return for their allegiance, liberals in government, especially at the local and state levels, have passed numerous laws, mandates, and regulations specifically designed to benefit union workers at the expense of everyone else. Those workers who oppose unions’ political activities, including Mark Janus, have been unjustly forced to financially support these quasi-political entities under the justification that they benefit from unions’ actions.

This argument, which has been repeatedly parroted by the Left for more than 50 years, suggests that a person’s free speech rights ought to be considered less important than the supposed benefits unions provide for government workers, a patently absurd assertion that’s made even more ridiculous by the fact public-sector unions have caused tremendous economic damage in many communities. Take Detroit, for example, a city that has suffered greatly because of unions’ greed. How have the workers there benefited from union representation since the 1950s? Or Cleveland, whose population has declined by more than 500,000 since the middle of the twentieth century? What about Illinois, another state with powerful union interests? As Mr. Janus noted in his objection to paying agency fees to unions, public-sector unions in Illinois have contributed to the state’s massive pension and debt crises.

The Supreme Court’s decision in Janus is a tremendous win for those of us who support individual freedom. No person, regardless of political affiliation, should be forced by law to subsidize organizations with whom they vehemently disagree. By giving workers the freedom to choose for themselves whether to pay dues to unions, it’s true that some public-sector unions will suffer. But that’s only because for far too long, countless workers have been required by law to pay unions against their will. That unconstitutional, egregious practice ended on Wednesday, and supporters of liberty everywhere should be elated.