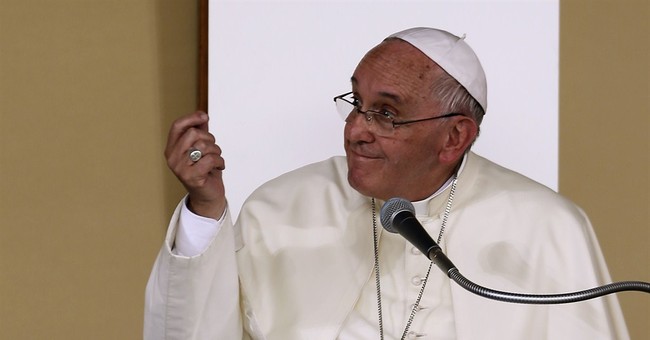 Editor's Note: This piece was co-authored by H. Sterling Burnett.

Pope Francis’ highly anticipated papal encyclical “Laudato Si,” which means “Praised Be to You,” was released on June 18 by the Vatican, and the potential fallout from the pope’s assault on fossil fuels will devastate the world’s most impoverished people and cause untold unnecessary deaths.

The pope’s letter to the world’s Roman Catholics supports numerous questionable claims made by climate alarmists. “A very solid scientific consensus indicates that we are presently witnessing a disturbing warming of the climatic system. ... A number of scientific studies indicate that most global warming in recent decades is due to the great concentration of greenhouse gases (carbon dioxide, methane, nitrogen oxides and others) released mainly as a result of human activity,” Francis wrote.

Francis is right, many studies say this. However, the pope ignored the fact that many other scientific studies show the present warming is not at all unusual historically and may be due primarily to natural causes.

The pope urges leaders across the world to do whatever is possible to prevent future human-caused warming. “[B]oth the cry of the Earth and the cry of the poor [must be heard],” wrote Francis.

They’re not shouting what the pope thinks they’re shouting.

While Francis is not the first Pope to address climate change, his encyclical is the first of its kind. In contrast to previous cautious papal statements, Francis’ rhetoric echoes language normally espoused by environmental radicals such as Al Gore and anti-capitalists like Michael Moore, not the leader of the Catholic world.

Judging by the way many climate alarmists—including the pope—speak, you would think the world is on the verge of entering a Mad Max-like post-apocalyptic horror. Yet, the solutions suggested by the papacy and climate alarmists around the globe amount to nothing more than blindly throwing money—a whole lot of it—at a problem

What science is certain of, however, is when people are forced to use wood, dung, and other primitive forms of energy to heat homes, cook meals, and power medical facilities, people die. Electricity keeps the lights on, safely heats those suffering from extreme cold, powers ventilators, and makes quality surgical care possible. In short, power saves lives, and in many parts of the world electricity is still an unreliable luxury.

In sub-Saharan Africa alone, experts estimate 600 million people live without electricity, and the renewable energy programs climate alarmists such as President Barack Obama and the pope’s climate scientists say we should rely on are incapable of providing the resources needed to save millions of lives.

But because the Obama administration is committed to battling what it mistakenly believes to be humanity’s baneful effect on the world’s temperature, many of the power-related funding projects implemented, managed, or encouraged by Power Africa have to use renewable energy sources, which are far less efficient, incredibly unreliable, and often more costly than traditional fossil-fuel-powered energy.

In a study by the Center for Global Development, researchers Todd Moses and Benjamin Leo found investing $500 in renewable resources will pull a single person in the developing world out of poverty, but $500 invested in electricity powered by natural gas can lift roughly four people out of poverty.

If the pope is truly concerned about the state of poverty, one of the best ways to improve the lives of billions of impoverished people is to support fossil-fuel power sources.

“How do you keep the medicine cold in a country where you don’t have enough electricity to run a refrigerator?” said Isaac Orr, a research fellow for energy and environmental policy at The Heartland Institute. “The unreliable nature of renewable energy sources like wind and solar power means only temporary or sporadic power. People are dying because of these policies.”

And they’ll continue to die if the pope’s encyclical is used to formulate public policy.