Julio Rivera
|
Posted: Nov 11, 2020 12:01 AM
Share   Tweet
The opinions expressed by columnists are their own and do not necessarily represent the views of Townhall.com. 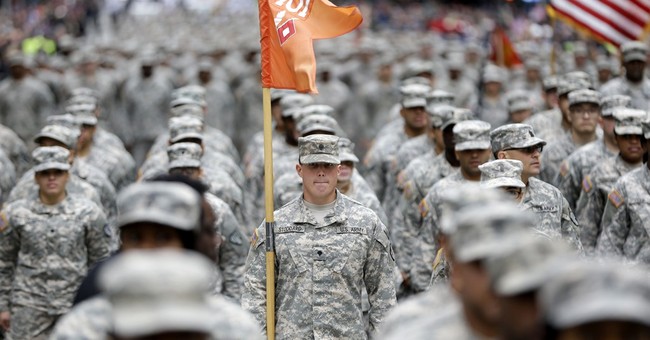 In America these days, particularly among the younger generations, the perception of the greatest military force in the history of the world, the United States Armed Forces, has swung in a negative direction.

There are many theories that have been concocted in the past 20 years or so to attempt to explain this phenomenon. Some experts opine that as a result of a heightened emphasis being placed on private school higher education, the military has started to become a less attractive option for young Americans after high school.

Additionally, the two unpopular wars in Iraq and Afghanistan have caused younger Americans, that see the unfortunate statistics associated with the veterans of these wars, to not only not consider the military as a career choice, but even more disturbingly, attach a negative stigma to the brave men and women who risked their lives defending the freedoms we all enjoy today.

Part of this disconnect in terms of how millennials and Generation Z view the military boils down to the fact that the importance of a strong military and the concept of peace through strength is lost on them. Many do not understand the international chess game occurring perpetually, involving many of America’s vital raw materials and energy producers, as well as the technology sector.

Some observers, including political commentator Michael Reagan, whose father was the leader of the free world during the days of fallout shelters, the Cold War and the constant threat of nuclear annihilation, believes that the biggest factor creating this disconnect is an unfortunate change in priorities and values in the American home.

Reagan recently told me, “If we want our children to understand the great history of our country, it’s going to have to be taught in the home. We can’t depend on others to do the very important job that we ourselves must do as parents. As my father taught me, I am teaching my children and I would ask others to teach their children the history that saved the world.”

Reagan is not limiting his efforts to teach that important history to his home, as The Reagan Legacy Foundation, which he founded has launched a new project called Walkway To Victory. The project honors the brave men and women who served in the European campaign during World War II and intends to be a lasting tribute to honor American, British, and Canadian soldiers who gave of themselves in service to the liberation of Europe during World War II.

The Reagan Legacy Foundation, in partnership with the Airborne Museum located in Normandy, France, are creating a memorial walkway that will be made up of engraved bricks adorned with the individual names of living and deceased veterans who served during WWII, including during the historic D-Day invasion at Normandy that took place on June 6, 1944.

This Veterans Day, as we sit in a state of national division as a result of last week's disputed election, one thing that Americans across the board should do is take a moment to acknowledge the sacrifices of our brave men and women in the military community and resolve to make a commitment towards contributing to the effort to ensure that those sacrifices are never forgotten.

These Americans, that have unfortunately not received the respect and admiration that they deserve have had a rough go in recent history as a September report from the Associated Press indicated that:

“Military suicides have increased by as much as 20% this year compared to the same period in 2019, and some incidents of violent behavior have spiked as service members struggle under COVID-19, war-zone deployments, national disasters and civil unrest.”

We can all do better for our Veterans. Not just on Veteran’s Day, but every day of the year.

Julio Rivera is a business and political strategist, the Editorial Director for Reactionary Times, and a political commentator and columnist. His writing, which is focused on CyberSecurity and Politics, has been published by websites including The Hill, Breitbart, Real Clear Politics, Newsmax, American Thinker, Townhall, The Washington Times and BizPacReview