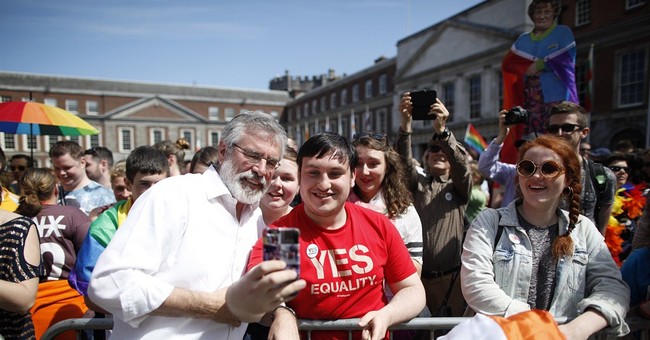 I am Catholic and conservative, and I believe the time has come for conservatives and the LBGTQ community to compromise and unite against our common foes.

The battle between conservatives, many of whom are Christians opposed to same-sex marriage on religious freedom grounds, and the progressive LBGTQ community, who see efforts to deny same-sex marriage as unjust and blatant discrimination against their individual rights, is playing out right now in the Supreme Court’s Obergefell v. Hodges case to be decided in June.

How can there possibly be common ground between these two directly opposing sides, with beliefs held so deeply and personally?

The gay community and conservatives can find common ground—and possibly even create alliances. But, it will take some willingness on both sides to adjust their current views and positions, make some concessions and find common ground.

The conservative view is that marriage, in the religious and legal sense, has always been between one man and one woman, and the primary interest of the state in marriage has been the children, which gays don’t biologically have on their own. To violate this definition and belief could be an attack on our religious liberties, eventually forcing people of faith opposed to same-sex marriage to marry gays against their conscience.

The LBGTQ view believes that marriage between same-sex couples is a right spelled out in the 14th Amendment, and not granting marriage rights to gays would means outright discrimination. There has been discrimination against gays throughout history, not unlike how women and minorities suffered for millennia until just decades ago – finally being liberated by the women’s suffrage movement and the Civil Rights Act of 1964.

What if both conservatives and gays are right?

The word “marriage” really has two meanings today: one, the religious term which has historically meant uniting a two of the opposite sex, and two, the secular definition, the state of being united to a person (of either sex) and enjoy the personal and legal rewards of their union.

We should end the confusion and separate the issue along these lines. Both sides can keep their own sincerely held definitions. Religious institutions or pastors should not be forced to (religiously) marry or bless same-sex couples, if it’s against their beliefs. At the same time, we should allow gays to legally marry throughout the country via a justice of the peace or religious institution that accepts same-sex marriage.

This protects both religious liberties and traditional marriage, while not discriminating against two LBGTQ adults who wish to be joined in (secular) marriage.

The problem with this compromise is with the extremes: some conservatives not only want their religious freedoms, but also a complete draconian ban on same sex marriages; some progressives want to force all institutions, religious or otherwise, to marry gay couples and perform associated wedding services, or face major penalties.

If both sides can temper their passions and not let their extremist elements run the show, compromise can be found. Both sides really have more in common than they think, as well as common threats.

According to Pew Research, Christians are the most persecuted religious group in the world, with 151 countries harassing Christians for their faith. According to ILGA and other research, homosexuality is illegal today in 80 countries.

Throughout much of Africa, the Middle East and Asia, both Christians and gays are persecuted by Muslim-majority countries as well as socialist and communist regimes. Penalties for both range from criminal sentences to job loss, beatings, excommunication, or even torture and death.

Conservative Christians and the gay community can unite against this worldwide oppression, defend each other from these common threats, and celebrate the West’s protections against these abuses.

If you’re concerned about same-sex marriage being detrimental to society, then you’re missing the point. The problem isn’t LBGTQ’s marrying; it’s the radical progressive agenda which has hijacked the gay rights cause with its goal to deny our Constitutional religious liberties and freedom of conscience.

Christianity’s mission is to love thy neighbor, and aggressively opposing all LBGTQ rights and promoting discrimination against them isn’t a Christian or a conservative value. If Christian and family values are a concern, accepting gays and encouraging monogamy is much better than the alternative.

Don’t be fooled by the radical left’s support of LBGTQ rights. Remember that Democrat Party leaders–Obama, Hillary, and others–were all firmly against gay marriage until very recently. The Clinton Foundation took millions from socialist and Islamic dictatorships around the world who are persecuting and killing LBGTQ’s by the thousands every year.