How Republican Lawmakers Can Halt the Democrat Zombie Apocalypse

Joy Overbeck
|
Posted: May 20, 2017 12:01 AM
Share   Tweet
The opinions expressed by columnists are their own and do not necessarily represent the views of Townhall.com. 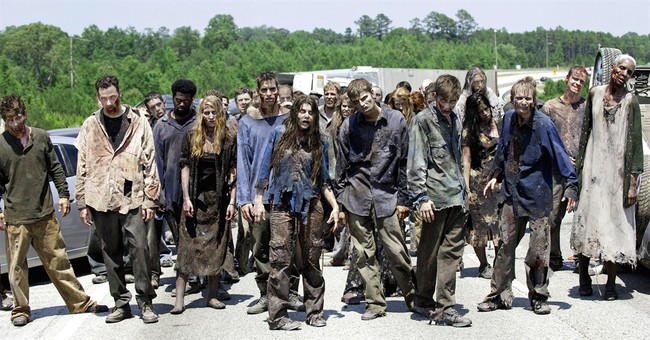 Here come the blood-lust Democrats, lunging stiff-legged after President Trump, their rags of lies flapping as they stretch their clawing hands out to wrestle him down. Beware, Republicans -- Trump’s fate is your fate. Remember when you didn’t own the House, the Senate, or the presidency? What happened is Trump happened. You may disdain his hair and his tweeting but most of you wouldn’t have been elected except for his message.

Because Trump’s agenda – job opportunities, tax reform that brings jobs back home, actual affordable health care for families, secure borders, America first not cowering and “leading from behind” –this is what the American people want. That’s why they elected him.

So do this now: grab any available microphone and tell the world over and over that Democrats, in trying to destroy Trump, are trying to crush the fervent desire of the American people for the president to help their families prosper.

Every time you help the Dems take bloody chunks out of Trump’s hide whether by your squishy comments or your silence, you are colluding in their attacks and hindering the swamp-draining Americans want. And you are defeating your own party and re-election prospects because your voters will not forgive you for deserting Trump’s promise to make America great again. If you refuse to support Trump, you are literally sabotaging your own party’s chances for keeping its majorities in the next election.

Know this about the Democrats: as we have abundantly seen, they and their poodle media will stop at nothing to turn Trump the stallion into a gelding. They will continue their chop chop chop. So anytime they demand anything – a recusal by a Trump official, a special counsel or prosecutor, a special commission or a staff member firing – you should say hell no. Anytime Democrats are celebrating these capitulations, they are celebrating another Republican scalp, another lefty win.

Know that every time they reach across the aisle it will be to hit you on the head with a brick. Anything Schumer and Pelosi are for, you must stand firmly against. Anytime Democrats are celebrating any of these capitulations, they are celebrating another Republican scalp, another lefty win.

You must view every word you say and every trip to a microphone or TV show as a potential defeat or a win for the leftist coup attempt to overturn this legitimately elected president and undermining our democracy. They are watching your every word for weakness. No longer can you say, “Well, if this allegation is true, it’s very serious.” No more, “It’s starting to look kind of like Watergate.” No more being “troubled” by the fake news pouring out of unnamed NYT operatives. Stop giving the coup-masters ammo. Just stop it.

Instead, when asked about President Trump allegedly leaking “classified information” to Russian diplomats at their recent White House meeting, say “So the intel wasn’t classified in March when the New York Times told millions that ISIS plans to use laptop bombs to bring down airplanes -- and we then banned laptops for travelers from 10 Muslim-majority nations? But if the president tells the Russians about it, suddenly that’s illegal? Would you rather President Trump NOT tell the Russians that ISIS wants to use exploding laptops to take down their planes? Next question.”

Regarding the “Comey memo” that Trump allegedly told the former FBI Director he “hoped” Comey would go easy on General Mike Flynn, say: “An anonymous phone call to the New York Times by a friend of Comey, a disgraced fired employee seeking revenge, is not proof of anything. If this happened, and Comey thought he was being pressured, why didn’t he do his duty as FBI director and tell the Department of Justice? As far as we know there is no memo. Let’s see the alleged memo. And let’s see all the memos Comey wrote about his meetings with Loretta Lynch and Barack Obama. Next question.”

In the fake scandal about whether Rod Rosenstein’s memo about Comey’s unfitness came before or after Trump’s decision to fire the then-FBI director, say: “That’s a non-issue. The president has the power to fire his FBI Director anytime for any reason, with or without the advice of anybody. Next question.”

Defeating the Democrat zombie attack also means you must put all your energy into doing your jobs and giving the American people what they want. A new healthcare bill so Americans can actually choose their own doctors while not bankrupting their families. And a big tax reform bill that puts more of their hard-earned cash in Americans’ pockets, at the same time lowering corporate taxes, bringing back their jobs from offshore to our nation.

Whether you’re purist Freedom Caucus, Dem-ish RINOS, or somewhere in between, you must overcome your differences for the good of the nation. When Republicans fight among themselves, Democrats win. Get it together or the American people will never again trust you with their futures. Believe it.

To prove your commitment to what Americans want done you must go big -- suspend all your upcoming summer vacations and stay on the job. Let the Dems frolic for photos at Memorial Day barbecues. You stay in DC and pass the big bills. The Dems will look silly and you will be serious about making America great again.

One more thing. Unmask the Obama leftovers and sneaky leaky never-Trumpers in the administration and all the government alphabet agencies who are shoveling info to the left press. Most of you senators and representatives have been roaming the halls of Congress and the White House for decades. You, better than anyone, know who the stealth Obama operatives and nefarious Trump-haters are. Expose these busy buzzing leakers to the president so he can fire them. Reverse-engineer the witch hunt. Do it now.

Become the heroes of the people that American voters crave. Be the promise-keepers they elected. If you can’t find the courage, binge-watch Clint Eastwood films in the Congressional lunch room. This may be your last chance; Republicans haven’t been totally in charge as you are now since 2007. And zombies tend to multiply.

Joy Overbeck is a Colorado journalist and author who writes for Townhall.com, The Daily Caller, The Washington Times, American Thinker, BarbWire and elsewhere. More columns: https://www.facebook.com/JoyOverbeckColumnist  Follow her on Twitter @JoyOverbeck1