None Dare Call Her Treasonous

Joy Overbeck
|
Posted: Aug 04, 2016 12:01 AM
Share   Tweet
The opinions expressed by columnists are their own and do not necessarily represent the views of Townhall.com. 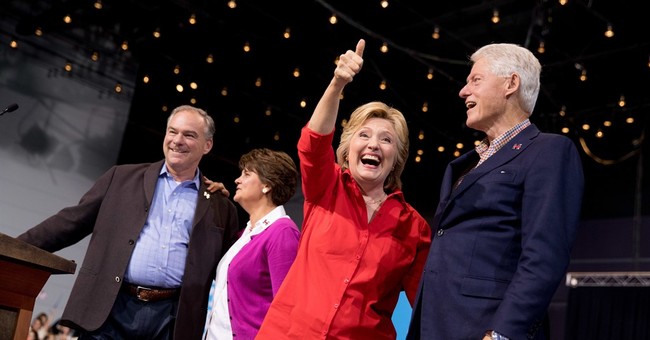 Treason is defined in Article III Section 3 of the U.S. Constitution: “Treason against the United States, shall consist only in levying War against them, or in adhering to their Enemies, giving them Aid and Comfort.” Is Russia an enemy or a friend of America? Is enabling Russia to obtain 20 percent or more of U.S. strategic uranium used in nuclear bombs and nuclear reactors giving Russia “aid” in exchange for $145 million dollars poured into the Clinton Foundation?

Two stunning films, “Hillary’s America” and “Clinton Cash” expose the real Hillary Clinton, a woman who has sabotaged the laws and principles of America she swore to uphold, favoring instead the international gang of thieves that shower the Clintons with millions to look the other way. Real-life examples of how the Clinton duo raked in huge bucks selling out America’s interests show she doesn’t give one popped button off her $15,000 pantsuit jacket for the nation she claims to serve. The facts demonstrate that she’s more worthy of prosecution than she is of the presidency.

The most treacherous slap to America was the shell game that transferred much of our nation’s precious uranium deposits to Vladimir Putin’s Russia and netted the Clintons over $145 million dollars to their “Foundation” in return according to Clinton Cash, Peter Schweizer’s meticulously researched book which is backed up by 56 pages of small print source notes. The New York Times and other outlets also covered this outrage.

The scheme began in 2005 with a private banquet in Kazakhstan enjoyed by Bill Clinton, Kazakhstan’s dictator Nazarbayev, and Clinton pal Canadian mining tycoon Frank Giustra, who had made multi-millions cutting lucrative mining deals with dictators in lawless parts of the world. Kazakhstan’s despot was no exception. According to the U.S. government, his human rights abuses include torture, jailing dissidents and journalists, human trafficking, and restrictions on freedoms of speech, the press, and assembly.

But none of that deterred Bill Clinton who pretends to be a humanitarian and whose wife constantly screeches, “I am proud of my record of public service and what I’ve done to help people have better lives.” Just another whopper, like the Clinton Foundation “charity” itself : investigative journalists at Commentary and The Federalist researched Foundation tax documents and found it only gave 10 percent of its millions to “life-changing work” in 2013. Its money mainly went to better lives for Clinton and cronies. The Foundation is simply a shady conduit for foreign governments and individuals who can’t legally donate to American political campaigns to gain influence and remain barely legal.

Though Giustra’s newly-created UrAsia Energy it had no background in the uranium business, within three days of the dictator’s dinner two deals were signed to obtain Kazakh uranium and a few months later, Giustra gave the Clinton Foundation $31.3 million. Giustra’s UrAsia merged with another global player, Uranium One, and the group began aggressively acquiring uranium in the U.S.

Giustra soon announced he would donate $100 million and half of his future profits to the Clinton Foundation. Ultimately, donations from Giustra and his investor buddies would total over $145 million.

The uranium action moved to Russia, where Vlad Putin had long been known for his desire to dominate this important market in his bid to boost Russia’s status and also to export lucrative uranium and nuclear plants around the world. The Russian State Atomic Nuclear Agency (Rosatom) controls civilian and military Russian nuclear power. Potentially threatening to the U.S., Rosatom built the controversial Bushehr nuclear reactors in Iran, and also supplies them with uranium. The Russian agency also does business in North Korea where a mad dictator has been threatening America with nuclear attack for years, and in hostile Venezuela and Myanmar.

As secretary of state, Hillary Clinton and her department received information from numerous sources warning of Russia’s attempts to control the uranium market. Then in 2009, Rosatom purchased an initial 17 percent stake in Uranium One. That meant it was buying into American uranium assets – Uranium One had 61 projects in Wyoming alone and also owned uranium claims in Texas, South Dakota, and Utah.  The now-thriving company was projected to control up to half of U.S. uranium output by 2015.

The Russians moved fast. In 2010, Rosatom announced it would buy majority 52 percent control of Uranium One. Prior to her confirmation as secretary of state some senators were worried about Hillary Clinton’s shaky relationship with honesty. To appease these critics, she had signed a document promising to seek preapproval from the Obama administration on contributions to the Clinton Foundation from foreign governments, foreign government-owned businesses, and major donors. But the Clintons had broken this pledge early and often.

They also failed to disclose the multi-million- dollar donors to the Clinton Foundation, investors in the Uranium One sale to Russia that jeopardized  America’s national security. Recently, the Foundation said it would refile its last five years of tax forms because so many contributions were omitted. The Clintons were also cashing in on Bill’s speeches, including an hour-long spiel in Moscow for which he was paid $500,000 by an investment firm run by former Russian intelligence agents and KGB agents. Yes, really.

Were the Clintons taking millions from the Russians even as Hillary was contemplating approval of the potentially dangerous Uranium One deal? Looks like. Because uranium is a strategic resource, the Russian purchase of a Canadian firm holding large U.S. resources needed approval from the government’s Committee on Foreign Investment in the United States (CFIUS) which includes the secretary of state and other cabinet officials.

Wyoming Senator John Barrasso warned the Obama administration about Russian control of uranium in his state, writing about Russia’s “disturbing record of supporting nuclear programs in countries that are openly hostile to the United States, specifically Iran and Venezuela.” Members of Congress were also alarmed that Uranium One might transfer U.S. uranium to Iran. In a glaring understatement, several of them wrote then-Treasury Secretary Tim Geithner that “we believe the take-over of essential US nuclear resources by a government-owned Russian agency…would not advance the national security interests of the United States.” Gee, you think?

But not to worry. Secretary of State Clinton and the other CFIUS members approved Rosatom’s majority stake purchase of Uranium One in October, 2010. Then the Russian-owned nuclear company promptly bought out Uranium One shareholders; since 2013 Uranium One has been solely owned by the Russian government.

It’s now very possible that America’s uranium could end up in Iranian or North Korean nuclear reactors thanks to the chain of events that began with Bill Clinton and Frank Giustra’s party with Kazakhstan’s dictator back in 2005.  After approval of the Uranium One deal, the company’s Senior VP admitted they’re after more U.S. uranium to satisfy the huge global market: “We’ve got China – they’re looking at opening 500 nuclear power plants in the next 40 years; Indian – several hundred…So you can see worldwide there is a huge demand for nuclear power.”  And for nuclear bomb-making ingredients like uranium.

Hillary Clinton promises to secure American’s safety. Why then would she approve a treacherous deal handing our uranium over to the militarily aggressive Vlad Putin who yearns to reassemble the old Soviet Union, has already gobbled up parts of Ukraine, threatens other former territories, and sells uranium to Iran and North Korea?

Clinton showed precisely the same brazen contempt for our nation’s interests when she set up her insecure home brew server, knowing her secret emails as secretary of state were  vulnerable to hacking by our enemies. She just didn’t care. There, too, she broke her written promise to the government. She purposely concealed her emails and deleted 30,000 to cover her ample derriere and hide whatever she was up to in Libya and elsewhere from prying congressional eyes and Freedom of Information requests. Again, she aided the enemy, this time by traitorously revealing the names of our intelligence operatives in the Middle East and actually getting some killed as a result according to recent reporting.

Hillary Clinton’s loyalties are not to America. She’s a globalist who just doesn’t care that her flagrant misdeeds betray our nation. As Clinton Cash makes clear by tracing her pay-to play schemes that sold out U.S. interests, her allegiance is only to filthy lucre and her own self-interest. There’s no “recklessness” as Comey charged – in anything Hillary Clinton does. She’s actually one of the most calculating and deliberate criminals on the planet. She has disqualified herself from the presidency, but only time and WikiLeaks will tell if she’s qualified herself for an orange jumpsuit.