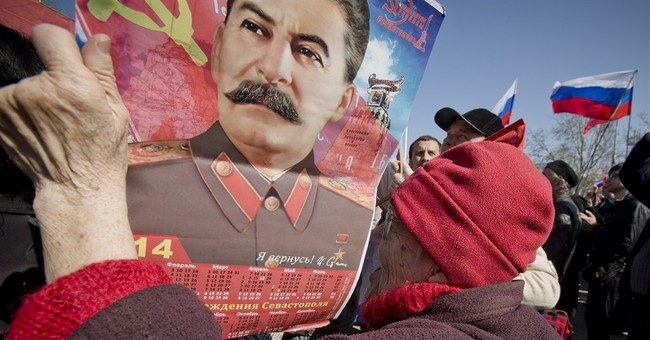 Today’s “progressive” ideas are nothing but retreads of the notorious 19th and 20th century command-and-control tyrannies that killed about 120 million of their own citizens. Variously known as socialism, Communism, and Marxism, their chief practitioners were Lenin, Stalin, Hitler, Mao and Pol Pot. That’s why hearing modern militant liberals called “progressives” induces brain bleed in this particular brain.

As long as we allow reality-denying liberals to call themselves “progressives” we are telling the world their tired, failed ideas are the smartest, most forward-thinking of mindsets. And we’re handing them a critical public relations victory. If they are progressives, by default we who oppose them must be hopelessly backward “regressives.” How do you sell a philosophy with that label?

Words define ideas; he who controls the language controls the argument. We need Scott Walker or Ted Cruz or Ben Carson or Jeb Bush, actually all of the Republican contenders, to loudly expose “progressives” as cheerleaders for the most destructive ideas of all time. Stop calling them progressives! Otherwise, the lib mind-myth of being on the “right side of history” could prevail in yet another election.

You’d think that the disastrous history of what really happens when governments put their citizens in ideological chains would be enough to turn voters against the modern day incarnation of “progressivism.” But luckily for libs, many today know nothing of history. In random street interviews people voice sorrow that FDR just died; they say Lincoln was the first president; that America declared independence from France, and that event happened in 1946. Or maybe 1973.

These victims of historical amnesia embrace Barack Obama’s diktat that government is their bff, entitled to regulate our lives because they are so benevolently concerned about our welfare. And so very much smarter than we are.

So smart they can control nature by turning back the “warming” of the planet and the rise of the seas; all we have to do is give up our spoiled-brat modern conveniences like electricity and gasoline. Similarly, Mao Zedong insisted he could control China’s agricultural output via collectives, forced labor, and shooting sparrows; all his people had to do was starve to death.

Modern-day “progressives” bred in the old mold have given us control-freak government that tells us what kind of healthcare we must have (the kind that triples our premiums and deductibles meanwhile denying us our preferred doctors and hospitals); what kind of gas we must use (ethanol, causing corn product prices to go sky-high and escalating world-wide hunger); what kind of light bulbs we must buy (bulbs eliminating American jobs because they’re now made in China, plus stuffed with lots of toxic mercury -- thanks Greenies); what kind of food we should eat (banning sugar and trans fats; what kind of car we must drive (whatever green vehicle the government will pay us to buy), and so on.

· Capitalism and free enterprise, which have lifted more people out of poverty than any other system in the world, is actually evil and oppressive

· Differences in class, wealth and race put humanity eternally at each others’ throats

· Humans are responsible for global warming because of our selfish use of planet-killing carbon-based energy, even though carbon dioxide is only a miniscule .038 % of greenhouse gases according to the U.S. Geological Survey

· Gas-powered cars are bad; electric cars good because they run on the fuel that lives in the walls of Millennials’’ garages (nothing to do with coal or other carbon energy)

· Giving millions of illegals green cards won’t steal jobs from citizens who work in landscaping, construction, maintenance, restaurants and hotels because these are jobs “Americans won’t do”

· The government is more responsible for your success than you are: “You didn’t build that!”

· ISIS is not in fact Islamic and is certainly not the Islamic State it proclaims to be, even as it conquers vast swathes of the Middle East and murders tens of thousands

If irrationality were progressive, we would all be progressives. It shouldn’t be that difficult for the Republican presidential candidates to dismantle this ridiculousness piece by piece. And the first piece would be to call the “progressives” who they are really are: the retro belligerents of a ruinous and obsolete ideology that aims to enslave the personal liberties uniquely enshrined in America’s Constitution.

Joy Overbeck is a Colorado journalist and author published at Townhall.com, The Washington Times, The Daily Caller, American Thinker, Breakpoint.org, and elsewhere. Follow her on Twitter @JoyOverbeck1.