Josh Mandel
|
Posted: Jan 22, 2022 12:01 AM
Share   Tweet
The opinions expressed by columnists are their own and do not necessarily represent the views of Townhall.com. 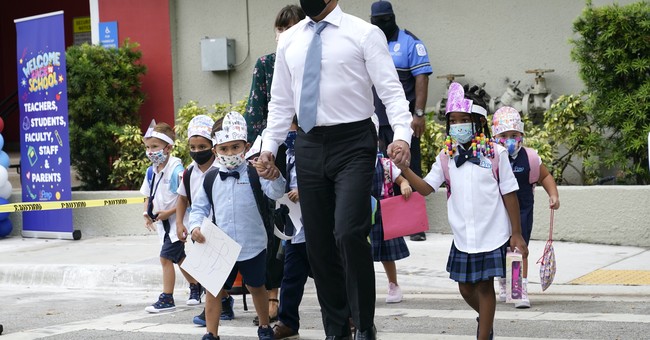 The federal government showered government schools with money to stay open, but they’re shutting down anyway. It’s turned into a ruse and the victims are the children and the taxpayers.

Ohio received more than $6 billion in federal COVID relief funds earmarked for keeping our public schools open. After two years of this pandemic, any schools who accepted this funding and still haven’t found a way to keep kids in class should be forced to refund their share of the money.

Instead of reopening, many public schools in Ohio are returning to remote learning. While traditional homeschooling is terrific for children and families for a variety of moral and educational reasons, we know from agonizing experience that the government schools’ experiment with remote learning has been an abysmal failure for students.  Grades have dragged, social development has suffered, depression rates are up, suicide rates are up, and parents are overly frustrated with the schizophrenia and indecision of public school administrators.

Predictably, schools across the country have reported a sharp rise in failing grades as a result of the shift to online education. At the same time, there has been a sharp rise in mental health crises among children of all ages, especially young girls.

Remote learning is also a devastating burden to families, especially those with two working parents. In many cases, schools make the switch to online instruction with minimal notice, sending parents scrambling to make last-minute arrangements. Those with younger children don’t even have the option of leaving them alone, forcing them to burn through vacation time and sick days (if they have them), and eventually start forfeiting pay and risking termination if they can’t find someone to watch their children.

Naturally, the pain is most acute for lower-income families and single-parent households. In urban areas, especially, there are a huge number of single mothers struggling to make ends meet and provide for their children. What are they supposed to do when they get a call or an email informing them that they need to take off work indefinitely because teachers are unwilling to take the sort of everyday risks that millions of Americans have grown accustomed to over the past two years?

“It didn’t give you time to do anything, to prepare for anything,” according to Delores Gray, a grandmother who is raising two grandchildren and sending one to the Cleveland Public Schools. “They should have made a better plan” before returning to remote learning, she added, pointing out that her grandchildren were as frustrated as she was.

On the other hand, remote learning offers all kinds of benefits for teacher unions. There’s no commute to school. Noisy students can simply be muted, and disciplinary issues can more easily be ignored (or outsourced to the local police).

But decisions need to be made based on what’s best for kids, not what’s best for adults — namely the teacher unions and high-paid administrators. Unfortunately, teacher unions are effectively running the show in most school districts, especially in urban areas. And teacher unions, in complete defiance of “The Science” – which shows that transmission in schools is much less common than initially supposed – are for the most part demanding a return to virtual learning.

This is not what taxpayers paid for. We spent $190 billion to make sure public schools had the resources to safely reopen. So what happened to all that money?

When I was State Treasurer of Ohio I put our state’s spending online so that anybody could look up where their tax dollars were going. Schools should do the same thing, both for their regular funding and for their COVID relief funding. If they spent the money properly, then our children should be in school, where they belong. If they spent that money improperly, then administrators need to be held accountable. Sunlight, as they say, is the best disinfectant.

Our schools should be open. School districts have had plenty of time to adapt. If they still refuse to let students back in the classrooms, then they should return their COVID relief money to the taxpayers. It’s that simple.