Josh Hammer
|
Posted: Jun 17, 2022 12:01 AM
Share   Tweet
The opinions expressed by columnists are their own and do not necessarily represent the views of Townhall.com. 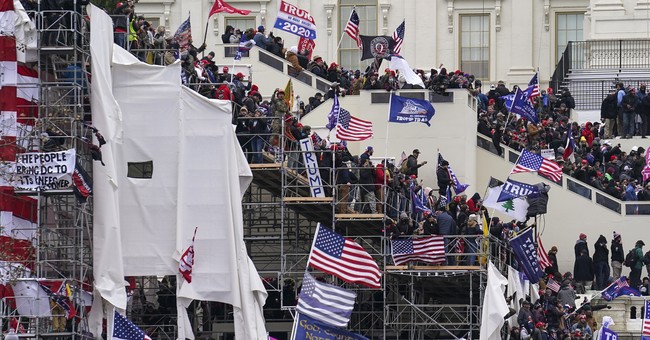 To listen to House Democrats' -- and Liz Cheney's and Adam Kinzinger's, but I repeat myself -- shrieks of hysteria from the opening nights of the Jan. 6 House Select Committee dais is to hearken back to the Soviet-era show trials of yesteryear. Vladimir Lenin, as the veteran conservative commentator Roger Kimball reminds us, referred to them as "model trials," wherein the "aim isn't to discover the truth -- which was supposedly already known -- but to stage a propagandist exhibition."

For Democrats, the aim of the Jan. 6 Select Committee's "propagandist exhibition" is twofold: First, to attempt (in vain) to distract a besieged citizenry from the myriad problems now tearing asunder the country, under their leadership, in this midterm election year; and second, to lay the foundation for a Justice Department indictment against the 45th president that could hamstring his efforts to seek a second term come 2024.

To anyone paying even a modicum of attention -- and I'd recommend no more than that -- to the committee's theatrics, it is obvious that the game is rigged. Consider as but one data point how Cheney, who will be looking for a new job come January, deliberately edited Donald Trump's "Stop the Steal" exhortation from that fateful rally so as to omit the fact that he urged his supporters to make their way to the Capitol "peacefully and patriotically."

Or how about the fact that the committee has thus far made no effort to subpoena the families of the roughly 800 people who have been arrested -- and sometimes placed in solitary confinement, per columnist Julie Kelly's exceptional reporting -- for wandering in and traipsing around the Capitol, often shepherded right in by Capitol Police? Curious, that. A legitimate committee interested in investigation and arriving at the truth would surely want to call some of those families as witnesses. Perhaps that hypothetical legitimate committee would also be interested in hearing from the family of Ashli Babbitt, the Air Force veteran fatally shot on that day by a subsequently exonerated Capitol Police officer. Alas.

Instead, to take Democrats at their word -- an always-dubious endeavor -- is to believe that Jan. 6, 2021, represented the closest thing to an "insurrection" since the Confederate attack on Fort Sumter in April 1861. To be sure, some -- a very small minority -- of the protesters who made their way into the Capitol on that day did so with malicious intent. And that very small minority should be prosecuted to the fullest extent of the law. But as a whole, Jan. 6, 2021, looks something like a limper version of the Whiskey Rebellion of the 1790s, which amounts to no more than an asterisk in the high school history textbooks.

But the Democrats have found their "insurrection" -- and they want to make the dreaded Orange Man, conductor of this benighted orchestra, pay for what he has wrought. Or so they tell us.

The Democrats' obsession with the word "insurrection" raises an obvious additional question, though: How might we describe the recent attempt -- thankfully aborted at the last moment -- by a deranged California man to assassinate Trump-nominated Supreme Court Associate Justice Brett Kavanaugh, following last month's seminal leak of the draft majority opinion in the Dobbs v. Jackson Women's Health Organization abortion case?

Black's Law Dictionary defines an "insurrection" as "a rebellion, or rising of citizens or subjects in resistance to their government." Surely, any sober assessment of the trajectory of events pertaining to the Court's possible overturning of Roe v. Wade -- from Chuck Schumer nakedly threatening Justices Kavanaugh and Neil Gorsuch from the Court's steps to the unprecedented Dobbs leak to the now-month and a half of grueling (and illegal) "protests" outside the conservative justices' homes to the closest thing to a high-profile politically motivated assassination in America since Robert F. Kennedy in 1968 -- would lead one to conclude that this intimidation campaign against the Court, culminating in a literal assassination plot, amounts to a soft "insurrection."

And it is definitely more of an "insurrection" -- more of a straightforward attempt to rebel and implement a coup against our constitutional edifices -- than what happened on Jan. 6, 2021.

Nonetheless, after the Senate last month unanimously passed a bill to increase security for the Supreme Court justices in the aftermath of the Dobbs leak, it languished on Speaker Nancy Pelosi's desk. That bill finally passed the House this week -- against the repulsive dissenting votes of 27 House Democrats. Alexandria Ocasio-Cortez even openly bragged about her efforts to block the bill's passage. If she had any sense of shame, she'd hide her head in a bag.

On Wednesday, Senate Minority Leader Mitch McConnell issued a statement that concluded with this admonition: "The same Democrats who want to make a national spectacle out of their supposed opposition to political violence will not even call out violence and intimidation from their own side. Let alone fulfill their oaths and put a stop to it." No reasonable observer of our fractious politics can disagree with that bleak assessment. Because for Democrats, what constitutes an actual "insurrection" is merely in the eye of the beholder.