President Trump Emerges as Defender of the American Regime

Josh Hammer
|
Posted: Jul 10, 2020 12:01 AM
Share   Tweet
The opinions expressed by columnists are their own and do not necessarily represent the views of Townhall.com. 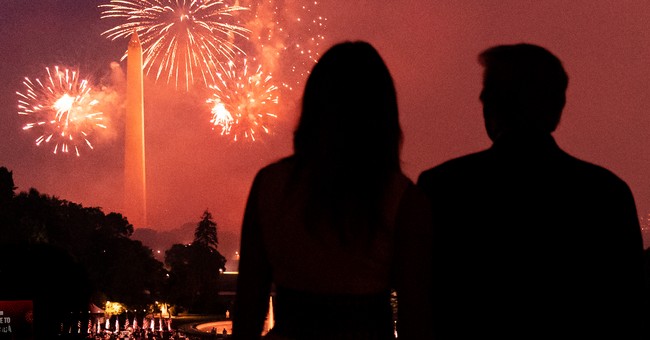 Last holiday weekend, President Donald Trump pivoted toward an electoral posture that this column, among many others, has repeatedly urged him to assume: that of defender of the American regime and preserver of the American way of life.

At the iconic summertime setting of South Dakota's Mount Rushmore National Memorial, amidst the backdrop of navel-gazing self-abnegation and widespread anarchic savagery tearing asunder a once-proud nation and a once-proud people, Trump delivered an aggressive and unabashed pro-America oration. He waxed poetic about how the Founding Fathers launched "a revolution in the pursuit of justice, equality, liberty and prosperity." He boldly defended the legacies of those whom the civilizational arsonists now seek to deracinate, such as George Washington and Abraham Lincoln. He painted a bold and unmistakable contrast with insurrectionist adversaries in our cold civil war: the "left-wing cultural revolution" that seeks "to overthrow the American Revolution." He asserted his commitment to "stand firm and unwavering" in defending the "ideals of the Declaration of Independence."

It was the speech that Trump needed to give -- the right speech, given by the right man, at the right time. The question, as is often the case, is whether the president can meaningfully seize upon this well-deserved momentum and make meaningful progress toward recovering from his presently foreboding reelection polling deficit.

The good news for Trump is that he could not have more helpful foil in the form of what the late Andrew Breitbart infamously called the "Democrat-media complex." Senator Tammy Duckworth, floated as a possible Joe Biden running mate, disingenuously assailed Trump for his purported defense of Confederate statuary. The New York Times, eager as ever to distort events to fit the preferred narrative of its gentry liberal readership, excoriated Trump's "divisive culture war message." The Washington Post, which ostensibly opposes democracy dying in darkness even as it contorts itself into a pretzel to appease Beltway elites, accused the president of exploiting social divisions. Even the putatively unbiased Associated Press described the speech as pushing racial division.

"Cancel culture" is utterly toxic, but media consumers might still be forgiven for noticing that the Post has thus far taken no discernible disciplinary measures against its reporters and editors who deemed it permissible to flat-out replace Trump's references to Lincoln with (nonexistent) pro-Confederate nostalgia.

Post-Ronald Reagan, Republicans have often sought to paint a bold contrast with their partisan foes. Between a political left beholden to its anarchist/pseudo-Marxist ideological flank and a sycophantic -- sometimes outright deceitful -- press fully committed to pushing Democrats' political messaging over falsifiable facts, Trump's contrast is tailor-made. Faced with an unrelenting and unified political/media opposition that is committed to depicting good ol'-fashioned American patriotism as something dark and nefarious, there is only one viable response: fight back by unequivocally seizing the mantle of American patriotism.

In so doing, Trump will simultaneously accomplish three things.

First, he will come home to the voters who elected him in 2016 -- those who were sick and tired of being told that their religious faith, support for law and order or policy preference for limited immigration rendered them unfashionable troglodytes.

Second, he can run against a truly revolutionary adversary, easily depicting his opposition as unduly radicalized in such a way as to open an obvious electoral door for apolitical Americans and persuadable swing voters who still think of themselves as something remotely approximating American patriots.

Third, he can portray himself, on the stump, in televised addresses and in substantive policy proposals as the rightful presidential heir to the nationalist, solidaristic presidential legacy of Lincoln. Just as the Great Emancipator rose to political fame as a unifier uniquely positioned to quash a militant insurrection, so, too, can Trump run as a unifying figure who is alone capable of defeating the hegemonic cultural insurrectionists of the woke leftist mob. A bitterly fraught people cries out for national healing, and the office of the presidency -- with all the attendant institutional advantages of a reigning incumbent -- is inherently well-suited to meet the challenge.

Public polling indicates that American patriotism may be on the decline, but the reality is that the median American is also not crazy. When presented with a binary ballot choice between "crazy" and "not crazy," the American people will choose the former. If Trump wants a second term, he ought to glom onto the Mount Rushmore adrenaline rush by getting off Twitter and fully enveloping himself in the shroud of the spirit of 1776.