Josh Goldstein
|
Posted: Jul 18, 2017 9:57 AM
Share   Tweet
The opinions expressed by columnists are their own and do not necessarily represent the views of Townhall.com. 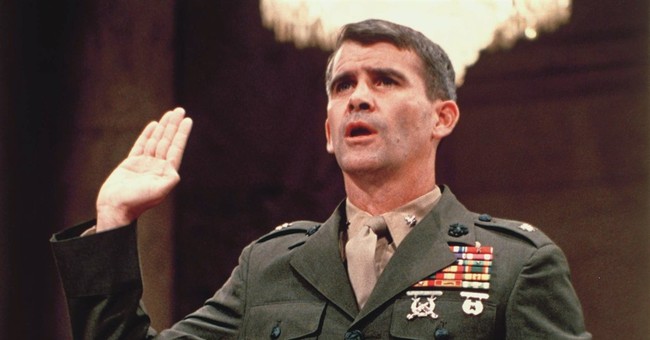 In July 1987, a patriot testified before Congress about what is now known as the Iran-Contra Affair.  The witness completely turned the tables on his critics and, in doing so, the America he desperately loved fell in love with him.  That once obscure Marine Corps Lt. Col. was Oliver L. North.

Iran Contra started, essentially, from a decline in American power and influence.  After the loss of South Vietnam in 1975 and the Islamic radicals storming the United States embassy in Tehran in 1979, many thought America’s best days were behind it.  Then came President Reagan who faced the twin crisis of Americans being held as hostages in Iran and the Soviets trying to establish a communist government in the Central American nation of Nicaragua.  President Reagan was disturbed by each development.  Congress did not help.  Just as they failed to fund South Vietnam after North Vietnam broke the Paris Peace Agreements, Congress did not want another so-called Vietnam and prohibited U.S. intelligence agencies from providing support for the Contras fighting against the communists in Central America.

President Reagan, in one of his few mistakes, authorized arms sales to Iran in an effort to obtain the release of the hostages.  Reagan did nothing to benefit himself, his administration, or any election.  He was absolutely torn by the hostages and the idea that America was not able to secure their release hurt him deeply.

Enter Lt. Col. Oliver North.  Oliver North was already a hero by the time he was detailed to the National Security Council (NSC) in 1981.  He was a recipient of the Silver Star and received the Purple Heart after being wounded in Vietnam.  North’s determination was evident when he repeated his first year of the Naval Academy after being a passenger in a tragic car wreck that nearly killed him.  He came back, not only graduating but also winning a boxing match against future Senator Jim Webb that is still talked about at the Academy.

While the rank of Lt. Col. is impressive and to be respected, there are many of equivalent or higher rank in Washington.  In lay terms, they are a dime a dozen in this town.  North was different.  He was known as a brave, natural leader who got things done.  North and others at the NSC believed their role to be advisory only and not that of an intelligence gathering agency.  With that knowledge, they devised a plan to divert profits from the Iranian arms sales to the Contras fighting the communists in Central America.

The Democrats in Congress launched an investigation and in the summer of 1987 called Oliver North to the stand.  Instead of deflecting blame or begging for mercy, North boldly told Congress that the Reagan administration did what it had to do because of Congress blocking the fight against the communists in Central America.  Seemingly unaware of the definition, he also explained to Congressman and Committee counsel John Nields what covert action was. (Nields later defended Hillary Clinton’s buddy Webster Hubbell who was convicted of a felony during the Clinton administration).

Unlike most political controversies, Iran Contra obtained a strong measure of sympathy for the accused even if people did not want Congress to abandon its oversight role. Ollie for President signs appeared in many places and even the television show Family Ties got into the act.  When Alex P. Keaton asked his little brother, his virtual clone, what would he tell his kindergarten class about what he did with his summer, the little brother replied, “I watched the Iran Contra hearings.”

In the end, Oliver North was vindicated.  He retired from the Marine Corps and his efforts in keeping the communists in Nicaragua at bay paid off when free elections were held there in 1990 and Violeta Chamorro was elected over the Sandinistas.

After retiring from the Marine Corps, North founded Freedom Alliance, which provides scholarships to the children of fallen and disabled military veterans.  He also reported from the front lines in the early days of the Iraq War where he witnessed the deaths of his beloved fellow Marines and the bravery of Navy Corpsman carrying not only wounded Americans, but wounded enemy soldiers, out of the lines of fire.  When events of military significance take place, especially in the Middle East, Col. North is one of the first called upon to give thoughtful analysis.  North currently hosts War Stories on Fox News Channel and is a passionate defender of the Second Amendment.

Sometimes what some meant for bad, and vilification, can turn out for good.  Such is the case of Ollie North, a man with a life well lived and who still serves his nation.  Semper Fi, Colonel.

Share this on Facebook
Tweet
Matthew McConaughey Makes An Announcement on Whether or Not He Will Run for Governor of Texas
Rebecca Downs
So, It Looks Like CNN Did Not Learn The Same Lesson WaPo Had to with Tweeting About the Waukesha Tragedy
Rebecca Downs
Legal Experts Have Bad News for Civil Rights Suits Against Kyle Rittenhouse
Rebecca Downs
Dr. Francis Collins Spews Word Salad When Asked By Fox News Reporter About Case Numbers In Florida
Scott Morefield
Enes Kanter to Change Last Name to 'Freedom' as He Becomes U.S. Citizen
Landon Mion
NIH Director Francis Collins: Vaccines 'Most Likely' Protect Against Omicron Variant, 'No Reason to Panic'
Rebecca Downs