The Deadly Dance With Communism

Josh Cohen
|
Posted: May 17, 2022 12:01 AM
Share   Tweet
The opinions expressed by columnists are their own and do not necessarily represent the views of Townhall.com. 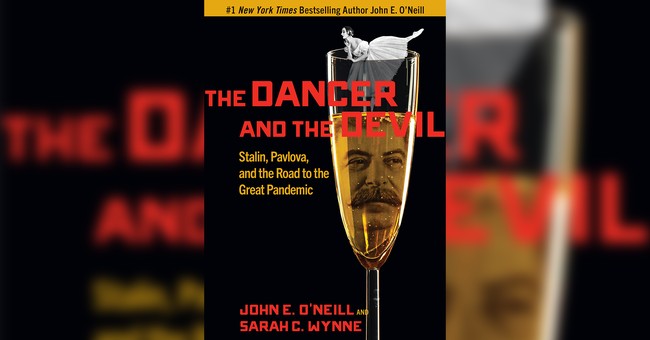 Source: The Dancer and The Devil, Regnery Publishing

The road to power is often a rather scenic route. There are undoubtedly various road hazards taking the form of the dreaded counter-revolution. As well as the pesky needs of its people, such as food. Perhaps the most important speed bump or ditch (pick your metaphor) for the power-hungry to avoid is the proliferation of the voice of dissent. Here we find the dark and gloomy path that authors John O’Neil and Sarah Wynne guide their readers down in “The Dancer and The Devil: Stalin, Pavlova, and The Road To The Pandemic”.

The book maps out in an informative and captivating way how the evil thread of communism has been weaved through history and the countless lives that have been needlessly lost in its wake.

The book calls upon the dual evils, similar but not the same, of Communism and Marxism.

O’Neil and Wynne also point out and expound on how the use of bioweapons seems to fit a little too snugly into the coterie of rhetoric and actions of those ideologies.

The book itself puts it perfectly, “Communism must kill what it cannot control”.

The gun barrel of the prose is aimed at “the examination of historical and current mysteries with the tools of the detective and an attorney’s eye for evidence that seals guilt”. O’Neil and Wynne seem to be simply unable to miss the bull’s eye, to the delight of its readers, and indeed, to this reviewer.

The book begins centered on the titular dancer. That dancer is Anna Pavlova, who much like her infamous “Dying Swan”, was both enchanting and more than a little tragic. The saga of the legendary Russian, Pavlova, had a sad magic to it and the authors capture this in their prose perfectly.

Pavlova, who may well have been the most gifted ballet dancer of her generation, died under mysterious, bordering on treacherous, circumstances.

It was in the early morning hours of January 23rd, 1931 that Pavlova died at the age of 49. The death, while officially ruled a result of pleurisy, was very much in dispute, and there were several involved in the police investigation who suspected homicide. Interestingly, if not suspiciously, while the world press heartily mourned Pavlova’s passing, there was seldom a mention of her in any of the newspapers that belonged to the Soviet Union.

The authors make several compelling cases that Stalin, in his typical sociopathic rigor, worked to have the influential dancer and actress murdered; likely at the hands of Stalin’s poison assassins. While the truth may remain shrouded in the mists of history, the book, much like James Reston Jr’s The Accidental Victim, provides a lucid, sensible, and compelling re-reading of history that some may consider settled.

From here, the authors set the structure for the rest of the book.

They turn their aforementioned attorney’s eye towards a century of Soviet misdeeds, Chinese communism, and the use of poisons and bioweapons, with a final thread marking the intersecting elements between them. Specifically the use of the weapons on Russian artists such Maxim Gorky, Raoul Wallenberg, and Alexis Navalny, among others.

Later on in the book, O’Neil and Wynne turn from the loved one in Pavlova, to the hated one in Stalin, and the under-remarked upon Laboratory One.

Stalin’s evil and sadism hardly need remarking upon, though for the people unfamiliar with his specific crimes, the book points towards his use of Gulags, and of his White Sea-Baltic Canal project, which ensured the immiseration and murder of hundreds and thousands of people, including, perhaps most infamously, the Kulaks.

The book then sets its sights on Laboratory One. Here the bonding agent that brings all the elements of the book together begins to coagulate. Laboratory One was (and depending on who you talk to, still is) a state-sanctioned manufacturer of poisons created specifically to assassinate dissidents and opponents. It was the manufacturing of these poisons, particularly Novichok, and the carrying out of the elimination of political threats, such as Pavlova, among many others mentioned in the book, that anchors the book with great emotional weight.

It might seem unconscionable, but those who live under the moral anesthesia of communist tyranny will be dulled to the outrage of this war on humanity that they might otherwise have.

The book then moves from the historical to the contemporary, and indeed, perhaps even touches on the prescient. O’Neil and Wynne point out that present-day dictators such as Putin and President Xi of China, look to their power-hungry predecessors. Indeed, the book also touches upon the use of media and cult of personality, as well as how important the oft-discussed “spin” is in manufacturing obedience.

For a relatively short read at 320 pages, the book is packed full of historical and contemporary events, given an investigative lens, with some hard questions answered, and, indeed, a number of new questions created.

Book reviewer Josh Cohen is a writer and a podcast host. Check out his podcast, “Eyewitness History”, which presents history through the eyes of the people that watched the events that shaped our world.