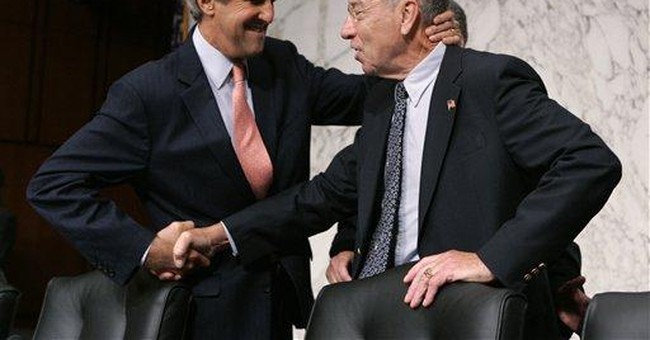 It is good that the President has ceased attempting to sell his public option health care initiative on the strength of a comparison to the United States Postal Service. Americans will not soon be convinced of the economic viability of an expansion of public healthcare when it is compared to an entity on track to lose $7 billion this year. This past summer the Government accountability office put the postal service on its high risk list because of its “increasingly shaky financial footing,” and in the spring Post Master General John Potter asked Congress for permission to cut delivery service back to 5 days per week and close 700 offices nation wide. This is not the sort of talk that inspires confidence that a government takeover of the healthcare industry is the answer to our fiscal tribulations.

It is bad that the President, demonstrating what can only be described as intellectual density, has chosen instead to compare his public option to our system of state colleges and universities. This is particularly ironic given the fact that the cost of higher education has been skyrocketing for years and has in fact outpaced that of healthcare. Even more ironic is that according to the College Board's annual tuition survey, the rate of growth of the price of public 4 year colleges has been faster than at private 4 year colleges; a trend that has persisted for 3 decades.

The Los Angeles Times recently reported that the California State Board of Regents has asked for an increase in fees for undergraduate residents that would be 44% higher than they were in 2008. In addition they are considering “ideas to reduce freshman enrollment by an additional 2,300 students…and to charge extra fees for some upper division undergraduate majors, such as business and engineering.”

A quick Google search reveals similar stories being reported across the country.

Our public institutions of higher learning struggle with rapidly rising costs and they do so for many of the same reasons as their private competitors, which as it happens are similar to those responsible for increases in the cost of healthcare: inflated demand and over reliance on third party payers and subsidies.

In fairness to the President, one of the points he is trying desperately if unsuccessfully to make is that public and private entities can co-exist. The point his detractors are making with increasing success is that if the problem we are attempting to address is the rising cost of healthcare, a “public option” is not a solution. The presence of a state run university system has not curtailed the rising cost of education in general nor has the “public option” slowed the rise in the cost of Public education specifically.

Of course Obama insists that taxpayers will not be subsidizing his public healthcare option; that it will be “self-sufficient” and “financed solely by the premiums it collects.” Revealing a disturbing lack of economic literacy he insists this can be accomplished because the public option will reduce waste and overhead and will not be burdened by the need to make a profit. (As if profit were some arbitrary and evil charge added onto a product or service. In fact it is the engine that drives the efficiency and cost cutting the president claims to be seeking. If it were not so we would have seen over the years non-profit organizations taking away the customers of profit seeking enterprises. Alas the opposite has been true. But I digress.)

Inquiring minds are dying to know A) why no one else has ever thought to reduce waste and inefficiency and B) what will account for the difference between the true cost of health care services and the price his public option will charge in order to make it “affordable.” Raise your hand if you hear Joe Wilsons voice echoing in the background. Rather like how public universities make higher education affordable to the masses the “public healthcare option” will be subsidized by taxpayers!

And like the public university system, when the government, which will be responsible for setting the price of care (as it sets the price of education at public schools), limits its financial commitment the institution must respond by raising its price and/or cutting and rationing its services. As the price is forced to better reflect the true cost of the service it will become less “affordable,” and like in higher education higher prices will increase the demand for financial aid, which according to both education and health care economists is a major driver of price inflation.

It is not fear of a Black Planet (as has been suggested by several new left apologists) that has sparked public opposition to the President’s ideas for health care reform. For an increasing number of Americans “Obamacare” is analogous with a slow-to-respond or unresponsive bureaucracy, suffering cost over-runs and seeking service reductions, and lay-offs in order to shore up its increasingly “shaky financial footing.”