Joseph Bilello
|
Posted: May 03, 2017 9:22 AM
Share   Tweet
The opinions expressed by columnists are their own and do not necessarily represent the views of Townhall.com. 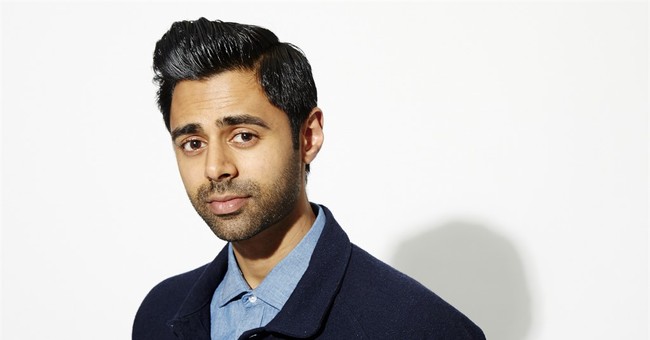 We all knew that Saturday night’s White House Correspondents’ Dinner would be nothing less than a Trump/Republican bashfest with self-proclaimed journalists and self-righteous celebrities patting themselves on the back for their efforts to save the free world from Nazi occupation.

Alleged comedian Hasan Minhaj became the victim of backlash following comments he made regarding Rick Perry’s absence during the WHCD on Saturday night. After sufficient Trump bashing, Mr. Minhaj asked the audience, “Hey, has anyone seen Rick Perry since he became energy secretary? I have a feeling he’s sitting in a room of plutonium, waiting to become Spider-Man. That’s just my hunch.”

It was later revealed that Mr. Perry was making funeral arrangements and mourning the death of his father who passed away on Thursday at the age of 92.

The social media backlash was instant as folks took to Twitter to express their disgust with the insensitive and “despicable” comments made by Minhaj. But are their grievances warranted? Can we assume that Mr. Minhaj was not aware of Joseph “Ray” Perry’s passing prior to delivering his speech?

Mr. Minhaj’s real offense was being the latest smug individual to question the intelligence of the current Energy Secretary and former executive of arguably the best run state in the nation during his tenure. At least Minhaj was clever enough to hide his disrespect under the guise of a completely unfunny joke.

Back in 2014, MSNBC reporter Kasie Hunt actually convinced herself that it was perfectly okay to look the sitting Governor of Texas in the eyes and just flat-out ask, “Are you smart enough to be president”? Comments like that and those made by Minhaj regarding Perry’s intellect are the things that should cause the outrage. Essentially calling Perry, a man who by all accounts is far more intelligent than Minhaj and Hunt combined, an idiot is the real offense. Why focus on the fact that he made the comments without the knowledge of an incident that made said comments seem more insensitive than originally intended?

Last month, another alleged comedian, Samantha Bee, came under fire for referencing the “Nazi hair” of a CPAC attendee. It was later revealed that the man’s haircut was actually the result of his battle with stage 4 brain cancer. Just as was the case with Minhaj, the right’s ire towards Bee was misdirected. It can also be safely assumed that Bee was not privy to the medical history of the young man she attacked.

The egregious offense was accusing a young man of being a Nazi because his political beliefs may not be in lock-step with her own ideology and that of other Hollywood elitists. Bee later issued an apology to the man. But her apology was misguided. Why should she apologize for lacking information that she could not possibly have been aware of? She should have apologized for calling a man she knows nothing about, a Nazi. That was her real offense.

Obviously, individuals have the right to express their disapproval with the comments of others. And as long as they do not advocate for the silencing of others' First Amendment rights, they should feel free to hold others accountable for what they say.  But should we attack others for offensive comments that could not possibly have been known to be offensive at the time, at least not in certain context?

Liable, slander and hate speech are part of the daily lexicon of nearly everyone on the left. We do not need to bend over backwards looking for examples of offensive and hateful speech from those who claim to be champions in the fight against offensive and hateful speech. There are plenty of legitimate reasons to be offended. Let’s not look for fake ones. And let’s leave the speech policing to those who do it best.