Jordan Tygh
|
Posted: May 13, 2021 12:01 AM
Share   Tweet
The opinions expressed by columnists are their own and do not necessarily represent the views of Townhall.com. 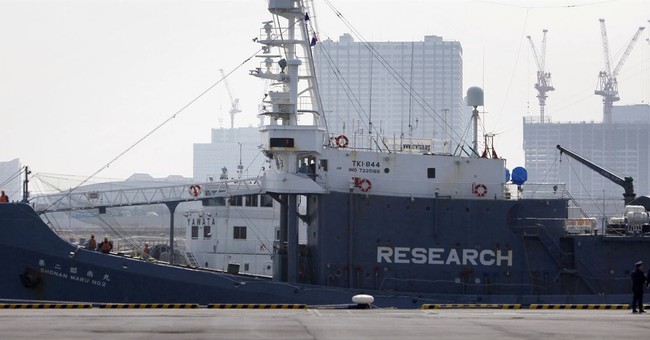 On April 26, an Iranian warship, the Harth 55, harassed the US Coast Guard cutter Monomoy in the Persian Gulf. On Monday, 13 Islamic Revolutionary Guard Corps (IRGC) Navy fast-attack boats menaced a formation of six U.S. warships in the Strait of Hormuz. Two of those ships were USCG cutters, the Maui and the Wrangell. May 10’s incident prompted the USCGC Maui to fire 30 warning shots near the IRGC boats. This international incident generated global headlines. It led many to wonder: “What the hell is the Coast Guard doing in the Persian Gulf?”

I was in the USCG from 2016 to 2020. During my service, I thrice deployed overseas. When I told friends and family that I was off to sail around the world, they often gave me puzzled looks and asked the same question: “What is the Coast Guard doing way out there?”

In fact, America needs the USCG service to accomplish a variety of overseas missions.

Many people think that the USCG merely patrols the U.S. coastline and performs search-and-rescue missions. Yes, but the USCG does so much more. Its extensive activities would surprise the millions of American taxpayers who finance this military branch. One of my former commanding officers said it best: “While there is some crossover, the Coast Guard specializes in maritime security while the Navy specializes in maritime defense.” That’s exactly why the USCG is best suited for certain overseas operations.

The most common overseas deployments are to Central America and South America. These missions chiefly interdict narcotics from trans-criminal organizations that traffic drugs at sea. After my two such deployments, I can attest that they are very hard work, but equally rewarding. Cutters and their assets chase and capture speed boats and even submarines stuffed with cocaine. The objective is to stop drugs from reaching America’s streets by stopping them before they reach America’s borders. The USCG is well positioned for this assignment because of its expertise at boarding other vessels.

Large USCG cutters also deploy further overseas. Recently, the CGC Hamilton was sent to the Black Sea. American commanders dispatched this ship to this strategic region while Russia conducted military drills nearby. The purpose was to increase America’s presence among allies in important areas. This includes the USCG’s valuable skills in training with NATO allies.

I participated in a similar deployment on the other side of the world, in 2019. The CGC Bertholf was sent to the Western Pacific, primarily to enforce U.N. sanctions on North Korea. When adversaries violated these sanctions and supplied oil to North Korean ships at sea, we sped in to stop it. It made sense to send the USCG, in case vessels needed to be pursued or boarded. This deployment also was a show of force against China. We worked with strategic regional allies and became the first cutter in history to conduct a freedom-of-navigation patrol through the Taiwan Strait. The USCG traversed this waterway and, thus, reminded China that all nations and vessels were free to do so.

The USCG has been in almost every conflict since the undeclared US-French Quasi-War of 1798-1800. During these Caribbean battles, the USCG was called the Revenue Cutter Service. The USCG still needs a very large, active-duty domestic presence to continue its important, every day, domestic missions. That’s why Port Security Units were created. PSUs are reserve-only outfits that travel overseas, typically in times of conflict and war. They guard important assets in ports and waterways. They operated during the Iraq War and frequently set sail to shield America’s base at Guantanamo Bay, Cuba.

The cutter that faced down Iranian vessels just days ago in the Persian Gulf is part of a larger unit called Patrol Forces South West Asia. It’s the largest USCG detachment outside the US and is based in Manama, Bahrain. PATFORSWA was created in 2002 to support the U.S. Navy with patrol craft. These combat-ready USCG boats oversee strategic areas as parts of Operation Enduring Freedom and Operation Iraqi Freedom.

Finally, most Americans likely would assume that the Coast Guard has played no role in landlocked Afghanistan. Wrong! Redeployment Assistance Inspection Detachments (RAID) were Coasties who supported the shipment of materials in and out of warzones. They ensured that containerized cargo was safe and seaworthy to transport. They also kept everything compliant for re-entry into U.S. ports. Even in Afghanistan, a nation without a coast, Coasties were there to advance American interests.

California native Jordan Tygh is a U.S. Coast Guard veteran. He holds a bachelor’s degree from Arizona State University and a master’s from the University of Southern California.