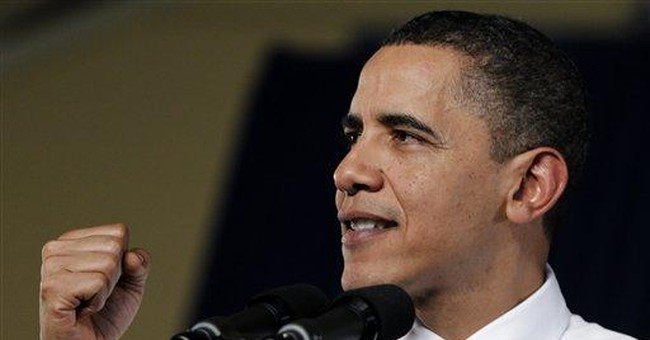 The Democrats' push for taking over the nation's health-care system is now in full-blown banzai mode. Most of the attention this week has centered on talk that the U.S. Senate will resort to "reconciliation," which Republicans called the "nuclear option" and Democrats until quite recently called the "we would never use that."

But Democrats in the U.S. House have a parliamentary trick up their sleeves, too. Politico is reporting that:

Swampland, the Time Magazine blog about politics, explained that such a move would mean that "the House would pass a rule saying if the Senate passes reconciliation, then they'll consider the Senate bill passed. If B is followed by C then A will be enacted."

One hundred and ten Congresses have come and gone, but only the 111th figured out how to pass legislation without voting for it. But just in case the aptly named "self-executing rule" doesn't work, rumor has it that other cutting-edge parliamentary fixes are in the works:

• Double Secret Passage. Rather than stammer and stomp to the press and fleeing members that the House passed a version of the health takeover already, House Speaker Nancy Pelosi and the rest of the House leadership would simply craft a "memorandum of understanding" by which they would declare that as far as they're concerned, the House version they passed last year is the same as the Senate version that passed shortly afterward, so there's no need to pass the Senate version directly. They could stipulate that this understanding would hold so long as reconciliation were used (not that it would matter by then).

• Whoah, What Is Kim Kardashian Doing Back There, and ... Is She Naked?! Hold the vote but find a way to distract a select few key "No" votes in order to secure passage.

• Enigmatic Nabobs of Negativity. This strategy would tie passage of the Senate version to a resolution so hopelessly riddled with negation that members would be unable to parse it fully to decide which way to vote. A "no" vote would mean the representative doesn't not want to not signify no lack of antinonopposition to the nonpassage or unnonapproval etc. If written successfully, Pelosi could merely announce that whichever side garnered the majority of the very confused votes was the side in favor of passing Obamacare.

• One-Point-Twenty-One Gigawatts! The Senate could pass the reconciliation version of the bill that the House has to pass first but has yet to pass (since they're waiting for reconciliation), with a proviso that upon its passage in both houses, time reverses within the confines of Congress up until the House goes "back" and passes the original Senate health takeover bill.

• Daving. In the 1993 comedy "Dave," Kevin Kline plays a small-town presidential impersonator who is given a full-time gig as the president after the real president suffers a stroke in flagrante delicto with a mistress. The doppelganger of course turns out to be a fantastic president. House leaders are currently scouring inner-city street corners and print newspapers' letters sections to find suitable fill-ins for wavering Democrats leaning against passage. The Easter recess and prospective townhall meetings loom large, so the object would be not only to find reasonable facsimiles who would vote "Yes" on the health takeover but also be adept at hollering at people for long periods of time without tiring or worrying about making a lick of sense.

• Teddy Would've Wanted It This Way. Combine every trick in the book used so far to get the legislation passt hurdles. Get every House and Senate leader and remaining legislation supporters to go tell everyone there's absolutely no way to pass the bill, the health-care takeover's dead, it's a tremendous crippling blow, etc. Wait for the impressive majority of outraged voters to relax their vigilance, then take action. Declare a surprise Congressional celebration of the life of Sen. Edward M. Kennedy, who worked his whole life long for health care you know, and make sure the booze is strong and plentiful. Then, early Easter morning, around 3 a.m., declare that the vote was held and the bill passed. Dazed and hungover congressmen who once feared what would happen if they told townhall meetings back home they voted "Yes" would suddenly find that prospect less daunting than telling them they were too liquored up to remember if they voted, let alone how, so they would groggily gravitate to whatever would be the health takeover justification of the day.

Of course, it won't matter if these suggestions offend the Constitution, the laws of common decency, or even the laws of physics. They do all that and more. But as the president has said for months and months, the time for talk is over. The time for some really crazy, desperate, totally-whacked-out-of-our-gourds, demented bobbing cuckoo bird of an idea to force this horrid bill into law is here.