Jonathan Williams
|
Posted: Jul 18, 2017 12:01 AM
Share   Tweet
The opinions expressed by columnists are their own and do not necessarily represent the views of Townhall.com. 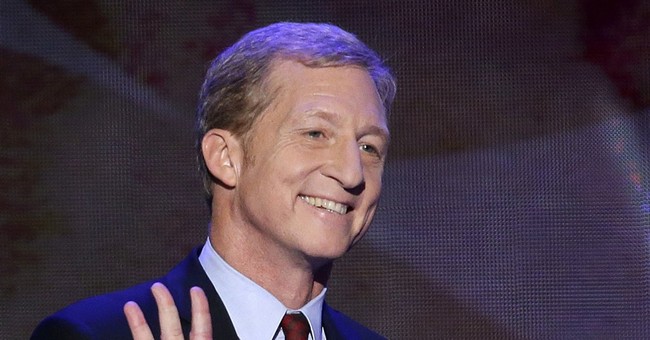 Editor's Note: This piece was co-authored by Joel Griffith.

Why is potential California gubernatorial hopeful Tom Steyer so interested in Kansas, a state more than 1,000 miles away? Observers of state policy trends will recognize a common theme from Steyer’s recent Los Angeles Times column, “Kansas' tax cuts are a spectacular failure.” For years, the tax and spend crowd has desperately tried to pin Kansas’ economic difficulties on tax cuts in an attempt to deter tax reformers elsewhere. As Steyer opined, “The Republicans’ zeal to duplicate the Kansas disaster for the whole country proves that they’ll stop at nothing to stack wealth and power in the hands of the few.” Unfortunately for Steyer, the data indicates otherwise.

First, consider the Kansas jobs growth record following tax reform. Compared with a group of eight other states with the most highly correlated private sector workforce composition, post-reform jobs growth has been quite competitive. U.S. Bureau of Economic Analysis (BEA) data show annualized growth of 1.3 percent per 10,000 residents from the end of 2012 through 2015 in Kansas, higher than five of those eight other states. Contrasted with the nation as a whole, Kansas exhibited marked improvement from the pre-reform era, jumping from 40th place for private sector jobs growth between 1998 and 2012 to 30th place from 2012 to 2015—the latest year for BEA data. Yes, the state still lags nationally, but the relative performance after the tax reform has improved. National pundits who claim tax reform hobbled the Kansas economy display an ignorance of the facts.

The number of total existingpass-through entities attributable to these switches from C-corps is minimal as well. Excluding sole proprietorships and counting one partner per partnership, KDOR data shows just 0.4 percent of the total number were switches in 2012, 0.65 percent in 2013 and 0.41 percent in 2014.

So is this pass-through exemption responsible for the current budget cap? An academic study released last year estimated that “recharacterization of pass-through income accounts for roughly 8.6 million” of negative revenue impact in 2013. Furthermore, the total pass-through exemption has “cost” the state less than $220 million in “lost” tax dollars each year. In other words, it’s a misnomer to assign primary blame for the budget shortfall to the small business tax cuts.

Even as the Kansas tax cuts benefitted the state’s economy, politicians created a budget failure by refusing to match the tax cuts with meaningful spending control. General Fund spending from 1995 through 2017 rose approximately 55 percent, adjusted for inflation and a whopping 89 percent in current dollars. Population increased just 12 percent from 1995-2017. In other words, for every 1 percent in population growth, spending increased by nearly 5 percent in real terms. Since 2012, General Fund spending has increased by more than 4 percent adjusted for inflation since 2012. If General Fund spending growth had been held to the rate of inflation throughout this period, FY 2017 spending would be $1.12 billion less, dwarfing the predicted deficit by a multiple of at least two. In short, at the state level, you cannot cut taxes without keeping an eye on the spending side of the ledger.

Detractors are correct that the nation does have much to learn from the Kansas tax reforms. But the lessons are far different than those misleadingly promoted by the naysayers. Lower taxes on both business and personal income indeed spur jobs growth. Despite the markedly improved job growth in Kansas relative to other states, the politically induced resistance to prioritize spending or tackle government inefficiency continues to be a major problem. Unfortunately, a majority of Kansas legislators chose to avoid the heavy lifting by maintaining the excessive spending and then growing it yet again this year. Here is what President Trump, Congress and policymakers from the other 49 states can learn from the Kansas experience: pursue lower taxes, but resist the ever present temptation to overspend.