Jonathan Feldstein
|
Posted: Jun 01, 2020 10:21 AM
Share   Tweet
The opinions expressed by columnists are their own and do not necessarily represent the views of Townhall.com. 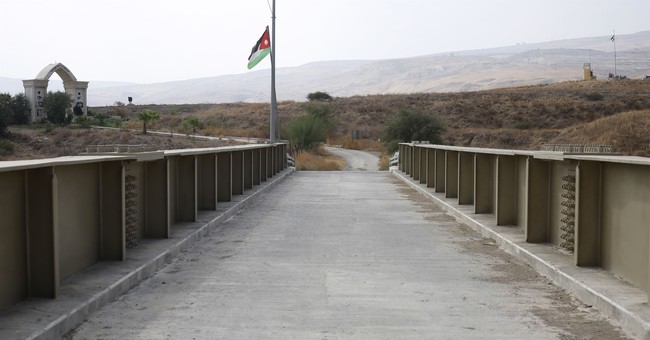 Recent news of Jordanian threats to reconsider or even sever ties with Israel over possible plans to annex areas of Judea and Samaria (the “West Bank”) call for a deeper understanding of the background and issues surrounding it.

Recently, King Abdullah II was quoted in a German publication, “If Israel annexed the West Bank valley, it would lead to a massive conflict with the Hashemite Kingdom of Jordan.” The King didn’t say that he would cancel its 1994 peace treaty with Israel, but didn’t rule it out.

In November 1947, the United Nations voted to partition what remained of British Mandatory Palestine into two countries, one Arab and one Jewish. This was after separating the bulk of Mandatory Palestine in 1922, creating Trans-Jordan, a new Arab country under Hashemite King Abdullah I, the current King’s great-grandfather. Later it became just “Jordan.” The original name, Trans-Jordan, underscored its artificial nature, that it was simply an area on the other side of the Jordan River.

Israel’s leadership accepted the 1947 Partition Plan and prepared to restore independence in the sliver of Mandatory Palestine and Biblical Israel in which it was being given sovereignty. The Arab world rejected the establishment of a Jewish state, and went to war to destroy Israel before it was even born.

Formal hostilities ended in April 1949 with an armistice between a bloodied newborn Israel and its neighbors. Israel’s area increased considerably from what it had been offered in 1947, yet Jerusalem was divided with sacred Jewish and Biblical sites under Jordanian’s control. Albeit that Jordan was a made-up state itself, it brazenly and illegally annexed much of what was designated as an independent Arab state, an occupation condemned within the Arab League, and only recognized by Pakistan and Britain.

The anniversary this week of Israel’s miraculous victory in the 1967 Six Day War ended Jordan’s occupation of the “West Bank,” as well as eastern Jerusalem, including the Jewish religious sites that it controlled and desecrated.

Paradoxically, while the Arab and Moslem world decried Israel’s occupation of “Palestine” after 1967, and retroactively to 1948, only in July 1988 did Jordanian King Hussein, Abdullah II’s father, renounce Jordan’s claims to most of the area it had illegally annexed four decades earlier. Jordan still claims guardianship of the Islamic mosques on the Temple Mount. Claiming direct descent from Mohammed, it's important for the Hashemites to maintain control on the Temple Mount, given their relatively recent transfer from Arabia.

Today, with the 53rd anniversary of Jordan’s defeat in 1967, and the upcoming anniversary of severing its claims to the “West Bank,” why is the issue of Israel considering annexation in the news? Why is Jordan threatening to reduce or sever ties with Israel 25 years after signing a peace treaty?

According to the recent Israeli government coalition agreement, and in accordance with the Trump “Peace to Prosperity” plan, after July 1 it’s anticipated that Israel may advance legislation to apply sovereignty to some 30 percent of the “West Bank,” Jewish communities built in the restored Biblical Judea and Samaria. But nothing is set in stone.

Preemptively, Jordan has sent up “trial missiles,” indicating that there would be severe consequences for Israel doing so. Whether in “settlement blocks,” in which the majority of Jewish communities exist, and retained by Israel under any presumed long-term peace agreement, or in the sparsely populated but strategically important Jordan Valley, Jordan is opposed.

Other than being paradoxical in that Jordan never really had any substantial, historic, or legal claims over the “West Bank,” after severing these tenuous ties in 1988, why do they care now?  Part of the answer is that the majority of Jordanian citizens are ethnically “Palestinian” Arabs. So even though the Hashemites were transplanted from Arabia, they have maintained at least tenuous advocacy for the “Palestinians” if only to appease their population.

Additionally, the peace treaty between Jordan and Israel is largely between governments, not people. Among average Jordanians, Israel remains the epitome of evil, the “Zionist entity” that has no legitimacy. Numerous Jordanian academic and professional groups, as well as parliamentarians, frown upon “normalizing” relations with Israel.

It’s a good lesson in how not to make peace. Allowing hostility to brew gives the King plausible deniability. Some say his opposition is just for domestic consumption.  Jordan is content to maintain quiet coordination between Jordan and Israel, while letting the Jordanian street continue with its hate and threats toward Israel.

There are more paradoxes in Jordan’s relationship with Israel. It’s widely understood that there is ongoing high-level security and military coordination between the two. Some even say that the coordination with Israeli intelligence helps keep King Abdullah on the throne.

Jordan is reliant on Israel in other ways as well. The 1994 peace treaty requires Israel to provide 50 million cubic meters of water to Jordan annually. In March, Jordan requested an increase in that amount, despite ending a long-term agreement for Israeli farmers to access Jewish owned land on Jordanian territory.

Also recently, Jordan signed an agreement with Israel to provide energy from its vast off shore natural gas reserves: 45 billion cubic meters worth. Maybe just letting off steam, there was a Jordanian movement to abrogate that contract.

Revisiting the terms of the peace treaty and subsequent contracts with Israel might be seen as a natural resource version of shooting one’s self in the foot. For a country largely devoid of energy, fresh water, or other natural resources, Jordan’s obsessive pre-occupation with Israel controlling parts of Biblical Israel is astonishingly self-destructive.

Jordan has also abrogated other agreements with Israel. For instance, the 1949 armistice specified that Israelis would have access to Jewish religious sites in eastern Jerusalem. Yet Jordan refused. Not only that, Jordan destroyed many of these, including synagogues and other Jewish sites, and even desecrated the Jewish cemetery on the Mount of Olives, using gravestones to pave roads and build latrines.

The “West Bank” is a pillar of the legal, diplomatic, and political dispute between Israel, the “Palestinians,” and the broader Arab and Islamic world. Israel maintains, as do many legal experts, that it has numerous legitimate Biblical and modern historical claims to apply sovereignty.

Whether Israel applies sovereignty and what Jordan’s response will be remain to be seen. Hopefully, these will be imbued with wisdom in the spirit of peace.