Jonathan Feldstein
|
Posted: Jul 04, 2016 1:25 PM
Share   Tweet
The opinions expressed by columnists are their own and do not necessarily represent the views of Townhall.com. 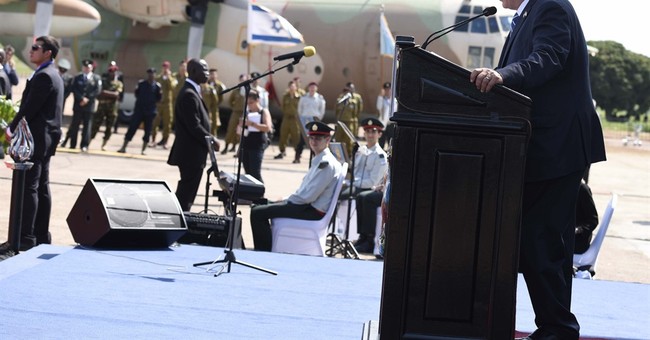 As America celebrates July 4 as the anniversary of independence, Israel and those who support her celebrate the historic milestone and miracles connected to the rescue of hostages and heroic counter terrorism operation at Uganda’s capital also on July 4, 40 years ago.  The celebrated operation was comprised of imagination on steroids, tremendous bravery and numerous miracles.

On 27 June 1976, an Air France plane with 248 passengers was hijacked by Arab and German terrorists, and flown to Entebbe, Uganda’s main airport. Uganda’s government provided cover for the hijackers who were welcomed personally by dictator Idi Amin.  In the ensuing week, as the United States was gearing up to celebrate its 200th anniversary of independence, Israel was gearing up for a brave, imaginative, and outrageously bold operation to rescue hostages held by the terrorists as yet another battle in a decades long fight to secure its independence.

While Israel had been fighting Arab terrorists for decades, the involvement of German terrorists brought back haunting memories of Jews being rounded up and murdered throughout Europe just 35 years earlier.

As horrific and scary as the situation was, Israel’s resolve to free the hostages and defeat the terrorists never diminished.  Today, in a world where insidious Islamic terrorism flourishes, this remains a model of the resolve needed to overcome and defeat terrorists.

Initially, the terrorists separated the Israelis and Jews from the larger group of hostages and forced them into another room. The first day, 47 non-Israeli hostages were released. The next day, 101 more non-Israeli hostages were allowed to leave. More than 100 Israeli and Jewish passengers remained as the hijackers threatened to kill them if their demands were not met. This threat led to the planning of the rescue operation.

During the time between the hijacking and the rescue, Israel’s Mossad built an accurate picture of the hostages’ location, the number of hijackers, and the involvement of Ugandan troops from the released hostages. Additionally, because Israelis were involved in many building projects in Africa during the 1960s and 1970s, a large Israeli construction company had built the terminal where the hostages were held.  This allowed Israel to construct a replica of the building with the assistance of those who had helped build the original, while planning the military operation, a case of Divine coincidence.

The Israeli government and military considered many options, yet what seemed like the most improbable choice was made. In a modern version of David the child taking on Goliath the giant, an Israeli commando force of some 100 soldiers was trained and briefed, practicing and preparing for any imaginable scenario. One of these was securing a Mercedes that was the same as that of Idi Amin, painting it to look like Amin’s car and, after touchdown, driving that car and convoy of other vehicles to look like Ugandan military loaded with Israeli troops straight to the terminal building.

Operation Thunderbolt was led by Lt. Col. Yonatan Netanyahu, composed entirely of elite commandos. His unit was given the primary task of attacking the airport terminal and rescuing the hostages. A Paratroopers force was tasked with securing the civilian airfield, clearing and securing the runways, and protecting and fueling the Israeli planes. A group from Israel’s famed Golani unit secured the C-130 Hercules aircraft for the hostages' evacuation, getting as close as possible to the terminal to board the hostages.  Another elite commando unit was tasked with destroying the squadron of MiG fighter planes on the ground to prevent any possible interceptions by the Ugandan Air Force, and holding off potential hostile ground forces.

The operation took place under cover of night and a nearly new moon. In what took most of a week to plan, the operation lasted less time than the length of the movies made to tell the story. 102 hostages were rescued. Five Israeli commandos were wounded and one was killed.  Three hostages, all of the hijackers, and 45 Ugandan soldiers were killed. Most of Uganda’s Soviet-built MiGs were destroyed.

It would have been impossible for Israel to transport a convoy of planes and equipment 2500 miles alone, undetected, without God’s protection and the involvement of numerous people.  With Israel holding the Sinai, planes were able to take off from much closer to Uganda. Because of good relations in Kenya with members of the Jewish and Israeli community in Nairobi, they used their influence to persuade Kenya's President Jomo Kenyatta to help.  Israel received Kenyatta’s permission for the IDF task force to cross Kenyan airspace and refuel at Nairobi’s International Airport. After the operation when it became public, it also became clear that other than supporting Israel in general, as a Christian, Kenya’s president understood God’s imperative to bless Israel.  His support provided cover and allowed the essential refueling of the Israeli planes. Because of this, in the aftermath of the operation, Idi Amin retaliated and slaughtered several hundred Kenyans in Uganda.

Lt. Col. Netanyahu, the older brother of Prime Minister Benjamin Netanyahu, was the only Israeli military casualty of the entire operation. Operation Thunderbolt was renamed Operation Yonatan in memory of the unit's leader, Yonatan Netanyahu.

I remember Operation Yonatan as if it were yesterday. The heroism and success was celebrated globally. It represented a combination of human bravery, imagination, the will to fight and overcome terrorists, and God’s protection.  There are numerous examples of this all, and I welcome you writing to me and I’ll be glad to share other sources with you.  (FirstpersonIsrael@gmail.com)

Indeed, with the rise of Islamic terrorists threatening Jews, Christians, and western civilization and the rest of the world, there are many inspiring lessons that can and should be learned from this to help in our fight against a new generation of the same terrorists.  When we wish one another a “Happy 4th” it has an even deeper meaning.