Trump's Deference to Putin Is Less About Collusion Than Character

Jonah Goldberg
|
Posted: Jul 18, 2018 12:01 AM
Share   Tweet
The opinions expressed by columnists are their own and do not necessarily represent the views of Townhall.com. 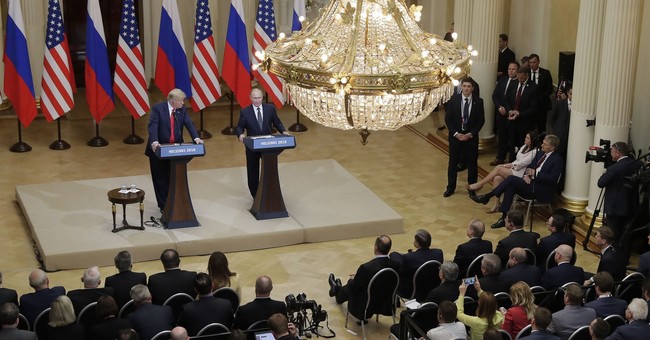 Last week, I wrote that the best way to think about a Trump Doctrine is as nothing more than Trumpism on the international stage. By Trumpism, I do not mean a coherent ideological program, but a psychological phenomenon, or simply the manifestation of his character.

Monday, we literally saw President Trump on an international stage, in Helsinki, and he seemed hell-bent on proving me right.

During a joint news appearance with Russian President Vladimir Putin, Trump demonstrated that, when put to the test, he cannot see any issue through a prism other than his grievances and ego.

In a performance that should elicit some resignations from his administration, the president sided with Russia over America's national security community, including Dan Coats, the Trump-appointed director of national intelligence.

Days ago, Coats issued a blistering warning that not only had Russia meddled in our election -- undisputed by almost everyone save the president himself -- but that it is preparing to do so again. But when asked about Russian interference in Helsinki, Trump replied, "All I can do is ask the question. My people came to me, Dan Coats came to me and some others. They said they think it's Russia. I have President Putin. He just said it's not Russia. I will say this. I don't see any reason why it would be [Russia]. ... I have confidence in both parties."

Separately, when asked about the frosty relations between the two countries, Trump said, "I hold both countries responsible. ... I think we're all to blame. ... I do feel that we have both made some mistakes."

Amid these and other appalling statements, Trump made it clear that he can only understand the investigation into Russian interference as an attempt to rob him of credit for his electoral victory, and thus to delegitimize his presidency.

For most people with a grasp of the facts -- supporters and critics alike -- the question of Russian interference and the question of Russian collusion with the Trump campaign are separate. Russia did interfere in the election, full stop. Whether there was collusion is still an open question, even if many Trump supporters have made up their minds about it. Whether Russian interference, or collusion, got Trump over the finish line is ultimately unknowable, though I think it's very unlikely.

But for Trump these distinctions are meaningless. Even when his own Department of Justice indicts 12 Russian intelligence agents, the salient issue for Trump in Helsinki is that "they admit these are not people involved in the campaign." All you need to know is: We ran a brilliant campaign, and that's why I'm president.

The great parlor game in Washington (and beyond) is to theorize why Trump is so incapable of speaking ill of Putin and so determined to make apologies for Russia.

Among the self-styled "resistance," the answer takes several sometimes overlapping, sometimes contradictory forms. One theory is that the Russians have "kompromat" -- that is, embarrassing or incriminating intelligence on Trump. Another is that he is a willing asset of the Russians -- "Agent Orange" -- with whom he colluded to win the presidency.

These theories can't be wholly dismissed, even if some overheated versions get way ahead of the available facts. But their real shortcoming is that they are less plausible than the Aesopian explanation: This is who Trump is. Even if Russia hadn't meddled in the election at all, Trump would still admire Putin because Trump admires men like Putin -- which is why he's praised numerous other dictators and strongmen.

The president's steadfast commitment to a number of policies -- animosity toward NATO, infatuation with protectionism, an Obama-esque obsession with eliminating nuclear weapons, and his determination that a "good relationship" with Russia should be a policy goal rather than a means to one -- may have some ideological underpinning. (These policies all seem to be rooted in intellectual fads of the 1980s.)

But Trump's stubborn refusal to listen to his own advisers in the matter of the Russia investigation likely stems from his inability to admit that his instincts are ever wrong. As always, Trump's character trumps all.