Omnibus Spending Bill Is No Betrayal of Trump

Jonah Goldberg
|
Posted: Mar 28, 2018 12:01 AM
Share   Tweet
The opinions expressed by columnists are their own and do not necessarily represent the views of Townhall.com. 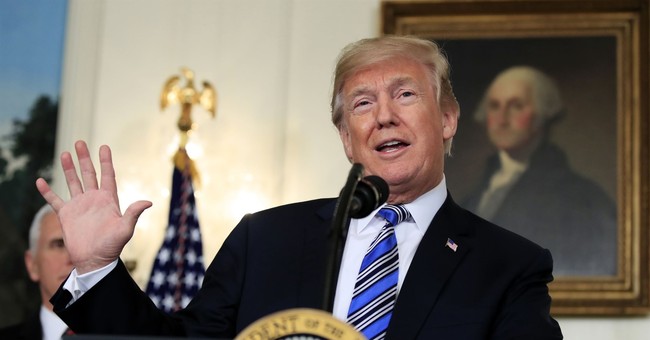 President Trump signed the $1.3 trillion omnibus spending deal on Friday, averting another government shutdown. Written largely in secret and passed without any time to read its 2,232 pages, the bill violated pretty much everything the GOP had promised about reforming the process of legislating.

But the sausage was even uglier than the sausage-making. For conservatives, with the exception of a large increase in defense spending, the bill is a hot mess. It raises discretionary spending 13 percent, advances almost no GOP domestic priorities while fulfilling many Democratic ones. There's a pittance for border security and some new fencing, but nothing for the president's coveted "big, beautiful wall."

It was reportedly this fact that prompted Trump to tweet a veto threat on Friday morning, sending White House and Hill staffers scrambling.

So whose fault was it? Those backstabbing blackguards of the Beltway.

"Total betrayal by the Senate and House leadership," said Fox News host Jeanine Pirro, one of Trump's staunchest supporters. "The president and the people who voted for him have been betrayed by Speaker Paul Ryan and Leader Mitch McConnell. And the people in Kentucky and Wisconsin need to make sure that these guys are defeated in the next election so this president can carry on the agenda that we elected him to do."

Pirro went on: "Folks, I want to be real clear. This is not on Donald Trump. This is on the leadership of the Republican Party, the very people this president should be able to count on. In truth, the president is surrounded by inept, incompetent warriors. And this bill is a reflection of just that ..."

It's interesting when people who insist that Trump is the greatest negotiator in history and the most farsighted three-dimensional chess player since Commander Spock also insist that he got rolled.

But that is the new party line, apparently, and it must be toed. "The president was really sold a bill of goods here," Trump confidante Chris Ruddy told the Washington Post.

There's just one problem: It's a lie. Or, to be more charitable, it's untrue, even if those saying it believe it (in some cases, no doubt, because that's what Trump tells them).

A source who was involved in drafting the bill tells me that the White House was in the loop on the negotiations. Trump's legislative affairs director, Marc Short, signed off on the deal -- and seemed to be as surprised as anyone by the veto threat. The president was briefed on the major pieces all along. And let's not forget: Trump agreed to, lobbied for and signed into law the budget framework for the legislation in February.

Why the lie? Undoubtedly for some people, it's too hard to process the idea that the president deserves blame or is out of his depth. Many of the same people decrying all the wasteful spending in the bill haven't noted that Trump's stated reason for threatening a veto was that it didn't spend more on a wall or include a fix for the Deferred Action for Childhood Arrivals program.

But cognitive dissonance is only part of the story. This stabbed-in-the-back narrative -- Dolchstoss in German -- is not merely a cynical excuse for letting Trump off the hook. It also lays essential groundwork for Trump to escape blame if the GOP loses the House in the 2018 midterms.

It's worth recalling the political climate the week before the omnibus was released. Democratic Rep. Conor Lamb had just won a special election deep in Pennsylvania's Trump country, and the air was thick with predictions that the GOP would get crushed in November. Despite a booming economy, anti-Trump sentiment was fueling a Democratic wave.

The Dolchstoss myth solves that problem. Amy Kremer, co-founder of the super PAC Women Vote Trump, and countless others have insisted that betrayal -- not Trump -- is why the GOP will lose in November. "Democrats just won November #midterms," Kremer tweeted when the bill was passed. "No point in wasting my time between now and then."

Conservative discontent over the omnibus spending bill will surely make things harder for the GOP, and for the president. But the most important priority has been saved: the ability to say Trump is not to blame.