Jonah Goldberg
|
Posted: Mar 09, 2018 12:01 AM
Share   Tweet
The opinions expressed by columnists are their own and do not necessarily represent the views of Townhall.com. 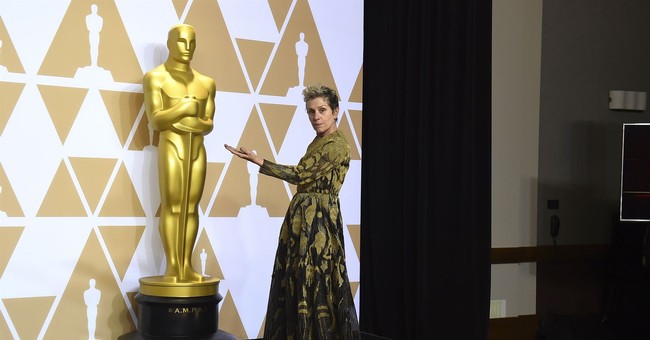 Go for it, Hollywood.

You probably didn't watch the Academy Awards -- most people didn't -- but you might have caught a bit of Frances McDormand's acceptance speech for her Best Actress award. At the end of a stirring speech about women in post-Weinstein Hollywood, she said, "I have two words to leave with you tonight, ladies and gentlemen: inclusion rider."

Don't feel bad if you don't know what an inclusion rider is. McDormand didn't either until recently. She told the press backstage that she had only learned about inclusion riders the previous week.

So what are they?

Simply put, an inclusion rider is like any other rider in a contract for a big-name Hollywood star, except instead of demanding that you have an all-beige dressing room or an infinite supply of green M&M's in your trailer, you demand that the cast and/or crew be diverse according to some formula. Usually, that formula is based on the demographic makeup of the larger society.

Tom Hanks, Oprah Winfrey or any other A-lister can simply say: If you want me, you're going to need to hire X many blacks, Asians, women, gays, etc.

And again, I say: Go for it, Hollywood.

In principle, I think people should be able to hire whomever they want. Of course, that principle runs up against various civil rights laws banning racial discrimination in public accommodations. And given the historical circumstances that gave rise to those laws -- i.e., the Jim Crow South -- I think those laws are warranted, at least when they stay faithful to their original purpose.

But that's not the situation in Hollywood. Big shots already demand all sorts of jobs and perks for their entourages and personal production companies. So if they can get away with insisting that Disney hire more gay actors or Asian makeup artists, they should give it a try, if that's what they really care about.

Let's be honest about what we're talking about though. An inclusion rider is just a "woke" way of demanding the ability to discriminate on the basis of race, gender, ethnicity, etc. The theory and motivation behind it might not be as evil as Jim Crow, but it's still discrimination at work.

And it is remarkably illiberal, at least when it comes to film crews. What you see on the screen is a matter of artistic vision. If you think a role calls for a black actor, then you're not being unfair to Russell Crowe by casting Denzel Washington. But if you tell a lighting director that he can't have the job he's qualified for because he's not gay or a woman, that's a bit different.

Hollywood's various powerful unions will likely be quick to point this out. As Christine Rosen of the Weekly Standard notes, the Costume Designers Guild is 80 percent female. So if we're to take this idea seriously, a lot of qualified women are going to lose jobs to less qualified men. It would work in reverse for the Art Directors Guild, which is 73 percent male.

So why do I want Hollywood to go for it? Because Hollywood rarely practices what it preaches. We get lots of nice award ceremony speeches about the superior values of Hollywood and how evil big business and Republicans are. We get lots of movies indicting capitalism and glorifying organized labor. The upshot of much of this stuff is that it's easy to do the right thing, so when society does the wrong thing, it must be because evil people wish it so.

Well, here's Hollywood's chance to put its money where its biggest mouths are. And not just the amorphous entity called Hollywood, but the individual actors and directors who just love to preen about their enlightened views. Let's see them prove they have the courage of their convictions.

Rosen is probably right that inclusion riders are ultimately an "unworkable quota system" that will eventually prove to be "another piece of empty Hollywood posturing." But let's see Hollywood try (and the media hold it accountable). Maybe we'll all learn something from the effort.