Jonah Goldberg
|
Posted: Apr 28, 2017 12:01 AM
Share   Tweet
The opinions expressed by columnists are their own and do not necessarily represent the views of Townhall.com. 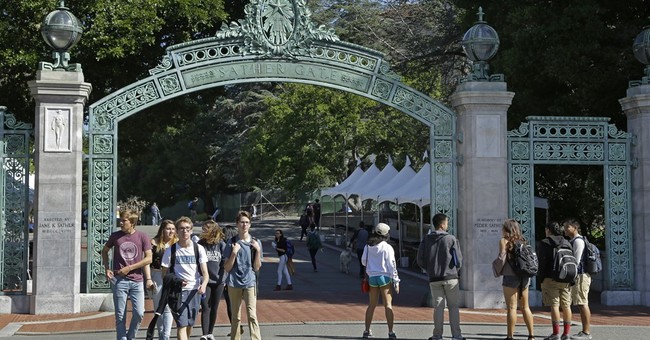 Demosthenes, the Athenian rhetorician and champion of liberty, pointed out around 355 B.C. that residents of Athens were free to praise Sparta's regime, but Spartans were banned from praising Athens.

In 1689, the British passed a law guaranteeing freedom of speech in Parliament. A century later, French revolutionaries incorporated into law the Declaration of the Rights of Man, which established free speech as a universal right. Two years later, the Americans ratified the First Amendment, which guarantees that the state shall not infringe on the right to free speech. Roughly a century and half later, in 1948, the United Nations adopted the Universal Declaration of Human Rights which says, "Everyone has the right to freedom of opinion and expression...."

I mention all of this because every time I read or hear about the pathetic state of affairs at the University of California, Berkeley -- where conservative speakers and rabble-rousers alike are banned from speaking lest they be assaulted by a mob -- journalists and other commentators insist on pointing out the irony that this is all happening "where the Free Speech Movement was born."

Yes, I know there was a thing called the Free Speech Movement. And, yes, its members and leaders talked a good deal about free speech.

But the movement for free speech is thousands of years old and runs like a deep river across the landscape of Western Civilization.

Indeed, I can't help but get the impression that a lot of people don't realize that the Free Speech Movement in this context is a brand name. I can tell you that the "mockumentary" band Spinal Tap was born in a 1979 TV skit for ABC. But that is not the same thing as saying the medical procedure -- aka the lumbar puncture -- was born in the same skit.

Mario Savio, the leader of the Free Speech Movement at Berkeley, was committed to free speech. But so was Berkeley at the time. In the years before Savio's movement, Berkeley had hosted speeches by Communists, Nazis (invited by leftists to cause a stir), and political and literary speakers of every stripe.

Whatever perfunctory regulations of free speech existed, then-Berkeley professor Nathan Glazer explained in his 1965 Commentary essay "What Happened at Berkeley," went "back to a time when no political activity of any kind was allowed on campus." Even presidential candidates were barred from politicking because, "as a state university it was not supposed to be involved in politics." But by 1964, these rules had already been loosened a great deal.

As for Savio, his mission was broader than merely wanting to allow vigorous debate. He wanted students to be able to participate as much as possible with the civil rights movement, which, obviously, was a very political movement. He was on the right side of that argument.

But Savio was also a passionate leftist. (When he got married to his fellow FSMer Suzanne Goldberg, The Daily Worker's Mike Gold asked him what they wanted for a wedding present. "All that we really want is for President Johnson to withdraw all our troops from Vietnam and the Dominican Republic. Very little would make us happier.")

Savio had a romantic hatred -- in the tradition of Rousseau -- for liberal democratic capitalism. His most famous statement came in his speech at Sproul Hall in 1964:

Whatever legacy Savio has for the cause of free speech is dead, but this mindset lives on. The rioters and goons -- along with their pusillanimous enablers in the administration -- are carrying on this tradition. It is a tradition that says this is our sacred place and anyone not loyal to our faith must be resisted, rejected and renounced. All the talk of "hate speech" is clever marketing -- like the label the "Free Speech Movement" itself.

What these petty, secular theocrats despise is heresy speech. And they will throw their bodies into the gears to silence it.