Jonah Goldberg
|
Posted: Jan 13, 2016 12:01 AM
Share   Tweet
The opinions expressed by columnists are their own and do not necessarily represent the views of Townhall.com. 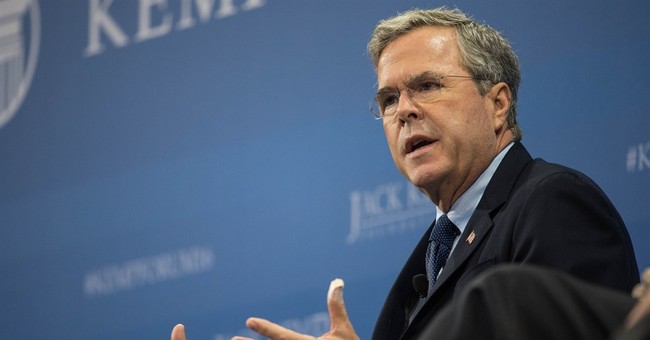 According to conventional wisdom, the GOP nominates the guy whose turn it is, while the Democrats look for a savior. As Bill Clinton once said, "In every presidential election, Democrats want to fall in love. Republicans just fall in line."

There's a chance the power of love will still triumph in the Democratic primaries. Right now, Hillary Clinton is running like a Republican, insisting that it's her turn. That's the real meaning of "Ready for Hillary," after all. But all the love is for long shot Bernie Sanders.

On the Republican side, however, the conventional wisdom is dead. The so-called establishment GOP candidates look like they're re-enacting the fight scene in the movie "Anchorman," attacking one another at every turn.

What's going on? In the GOP race, the real culprit isn't Donald Trump, it's Jeb Bush.

The next-in-line tale is correct, but the moral of the story isn't what people think. The Bushes, Dole, Romney and McCain didn't defeat their primary opponents because voters simply accepted their right to the nomination. (Voters aren't that compliant.) They won because they took advantage of their solid starting positions to broaden their support.

Each more or less had the establishment or moderate wing of the party locked down early. That freed them to spend months or even years wooing the conservative base. If you secure the moderate or establishment Republicans, you only need a relatively small slice of the true believers to get over the top (Barry Goldwater and Reagan had the opposite problem; they had the true believers sewn up but had to work to persuade the moderates. The former failed, the latter succeeded.)

During his vice presidency, George H.W. Bush cemented his lead by moving rightward on abortion and embracing Reaganism in totality. Dole, who'd let Bush get to his right in 1988, didn't repeat that mistake in 1996. Throughout Bill Clinton's first term, Dole courted the right by attacking Hollywood and embracing the Christian Coalition. In the lead-up to 2000, George W. Bush raised money from the establishment but courted Christian conservatives. The same pattern held true, more or less, for McCain and Romney.

Jeb Bush, for his part, went into the 2016 campaign with the establishment largely in his pocket. The big donors, his family's political machine and veterans of his brother's White House lined up. So far, so good. But Bush never really bothered to cultivate the right. He even seemed to take it for granted. Once it became clear that the grass roots were not going to rally to Bush, he started to hemorrhage support from voters and donors who wanted to back a winner. But by then it was too late to unify the establishment around someone else.

This was a particularly bad moment for such a mistake. Even moderate and liberal Republican voters have gone populist, which is why many are flocking to Trump. Acting a bit like Democrats, his supporters have fallen in love. It's not clear they can be won back by conventional politicians.

Meanwhile, Sen. Ted Cruz has been methodical in his attention to the right-wing grass roots. He's not exactly the unifying standard-bearer of the Right that Reagan and Goldwater were, but he at least figured out the political math -- and the populist mood -- early. That's more than you can say for Jeb Bush.