Obamacare's Square-Wheeled Rollout Has Democrats on the Hot Seat 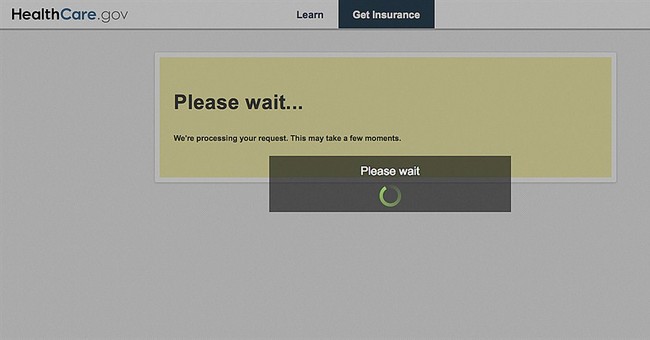 Earlier this week, MSNBC's Mika Brzezinski tried to call the HealthCare.gov helpline and got an operator. That's right: an operator! The call went through! MSNBC, the unofficial AV department of the Democratic Party, had a scoop. The network tweeted out the big news along with a link to the video: "Mika called the Obamacare hotline and got through with no problems -- right on air. WATCH."

It's a sure sign that the bar has been lowered to curb height when spinners are touting the exciting news that phone calls actually go through. Someone picked up the phone! Quick, hang that "Mission Accomplished" banner. Never mind that you simply cannot buy insurance from the exchanges over the phone. But the fact you can get someone on the line to tell you that is, I suppose, progress of a kind.

A few hours later, the head of the DNC, Florida Rep. Debbie Wasserman Schultz, went on MSNBC to insist that criticisms were overblown because she actually knew a young man in her state who signed up.

This, too, is progress given that the first -- widely publicized -- young man to enroll, Chad Henderson, actually never signed up. And many of the members of the studio audience for this week's Rose Garden infomercial hadn't been able to sign up yet, either. Still, there's an old saying: "The plural of anecdote is data." Now we've entered the era of, "The singular of anecdote is data, too."

This can only go on for so long until the Democrats cut and run from a program they've invested nearly their entire political identity in. Already you can see the thought bubble over some of their heads: "We lost control of Congress for this hot mess?"

Ah, but Obamacare is more than a website, don't you know? The president himself said so in his Rose Garden infomercial. And that is absolutely true. But so is this disaster. In fact, for critics of Obamacare the square-wheeled "rollout" of HealthCare.gov was a gimme. Put another way, it's been like watching a rival football team face-plant on the way out of the locker room.

Still, the barely holding conventional wisdom on the right and left is that the website will get fixed eventually, the glitches will be de-glitched, and one day we'll all look back and laugh at the fuss. That's possible. But with every passing day it's less likely. And if more Democrats join the movement to delay the individual mandate (Republican Sen. Marco Rubio already has drafted legislation to do exactly that), the whole thing could start to unravel almost overnight.

That's because insurance companies cannot survive Obamacare without the individual mandate. Under the law, they must offer insurance to anyone who needs it -- often at an artificially low price at that. The only way they can make a profit is if the government upholds its promise to get millions of young, healthy people to sign up for more expensive insurance than they need. Take away the mandate -- i.e., the penalty -- and you make that virtually impossible. If the government tells insurance companies they still have to provide insurance to bad risks, it will be like the government telling Apple it has to sell iPhones at a loss. The insurance companies will sue. And as Dan McLaughlin of The Federalist notes, their lawyers will invoke the Obama administration's arguments before the Supreme Court that the mandate was inseparable from the "must-issue" requirements under the law.

But even if, somehow, the insurance companies can be compensated for their losses on that front, the fact remains that the only people willing to put up with the North Korean-level customer service are people understandably desperate for health insurance. Those people aren't likely to be young and healthy.

Meanwhile, Secretary of Health and Human Services Kathleen Sebelius says the "A-Team" is on the way to fix the problems, and President Obama says the "best and brightest" are on the case. And any day, Vice President Joe Biden will probably reassure us that Santa is on top of things.

Maybe, just maybe, they'll manage to trim 5 million lines of bad code out of an estimated 500 million lines of code in a project that experts say should have taken 100 million lines. Maybe they'll plug the numerous and galling privacy holes in the product. Maybe operators will be able to do more than refer people back to the website.

But the clock is ticking.

And the Republicans who insisted that this monstrosity had to be delayed are looking just a little bit more reasonable with every passing tick.