Obama Wings it in Egypt 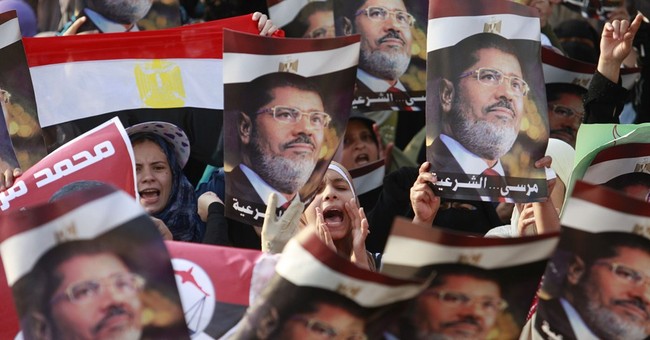 Last week, Edmund Sanders of the Los Angeles Times reported from Cairo: "As rival camps of Egyptians protest for and against the toppling of President Mohamed Morsi, there is a rare point of agreement: America is to blame." Both the Muslim Brotherhood and the coalition arrayed against it believe that the United States is against them. And, amazingly, both sides have a point.

Obama supported Hosni Mubarak, our geriatric dictator-client, right up until the moment Mubarak needed us most. But when events, or just the news cycle, made that support difficult, Obama abandoned a longtime ally and supported the forces of democracy. Then, just as many had warned, the Muslim Brotherhood rode democracy into power, putting Morsi in charge.

Recognizing the demands of the moment, Obama then supported Morsi as did his ambassador to Cairo, Anne Patterson. Patterson, who reportedly stiff-armed democratic and human rights activists, scolded protesters for naively thinking demonstrations were superior to elections. The administration's support for democracy's verdict lasted right up until the moment Morsi needed Obama's support the most. Then, Morsi too was gone, and so was America's defense of democratic norms.

One has to wonder what the next Islamist movement will say when America counsels it to put down its weapons and take up the ballot instead.

The most plausible interpretation of Obama's zigzagging approach to foreign policy is that he is simply "winging it," as Robert W. Merry, editor of the National Interest, writes.

It is truly difficult to find any intellectual coherence to the president's foreign policy. He fought for a surge of troops in Afghanistan, but refused to rally public support for the war he escalated. Worse, he later rendered the surge moot by announcing to our enemies that we'd soon bug out, no matter what.

During Iran's Green Revolution, he stood pat as the mullahs crushed a democracy movement seeking to overthrow a regime hostile to U.S. interests. In Libya, he intervened to oust a dictator who had become a de facto ally, insisting he couldn't stand by as innocents were slaughtered. In Syria, a vassal of Iran, he has stood by as innocents were slaughtered.

Again, the winging-it theory of Obama's behavior has a lot going for it. My only objection is that it strikes me as indistinguishable from so-called realism.

While Obama usually likes to triangulate himself rhetorically between realism and idealism, "realist" is the label his biggest fans in the foreign policy establishment use most. "Obama is a realist, by temperament, learning and instinct," Fareed Zakaria wrote in Newsweek in 2009. "More than any president since Richard Nixon, he has focused on defining American interests carefully, providing the resources to achieve them, and keeping his eyes on the prize." More recently, Harvard's realist guru, Stephen Walt, saluted Obama's "buck-passing" as a feature rather than a bug of his realist foreign policy.

Except nobody is that smart. During a crisis, the temptation is always to sacrifice the idealistic to the demands of the moment, i.e., to be a buck-passer. Why create problems by supporting this dissident or condemning that stolen election? Why make a ruckus about freedom of the press or the rule of law? Why honor this inconvenient treaty when we have so much to gain from trade with our ally's enemies? Save the idealism for later.

That's the process that kept Mubarak in power for 30 years. It's also the process that, over time, leads to everyone hating you, because no one trusts you. Just ask the Egyptians.