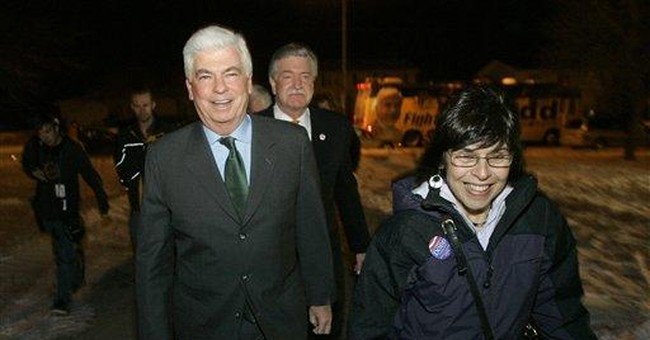 Democrats have said this at one point or another about every Republican president since, well, Herbert Hoover. That's because Democrats have been waiting for the resurrection of FDR like a cargo cult waiting for one last plane that never comes.

Such wishful thinking is rarely repaid. History just doesn't work like that. Lucy will always yank the football away from the Charlie Browns who think history will repeat itself perfectly. Fate, providence -- whatever you want to call it -- has a better sense of humor than that.

Which is why I'm beginning to think Barack Obama isn't the next FDR -- as so many promised -- but the next Hoover.

The creation myth of the modern Democratic Party goes something like this: After years of capitalist excess, personified by Hoover's "market fundamentalism," Franklin Delano Roosevelt introduced reasonable and pragmatic reforms that not only conquered the Great Depression but "saved democracy" itself.

Over the last two years, Obama and his defenders have constantly invoked this story to buttress the case for Obama's "new foundation" -- his version of a new New Deal.

Whatever the problems with this story -- and there are many -- the simple fact is that history has happened. We live with the consequences of the New Deal. Its institutions -- Social Security, FDIC, etc. -- are all around us, as are the progeny from the Great Society, another effort to replay the New Deal as if it was a new idea.

On liberals' own terms, to argue that we need something like another New Deal or Great Society is to argue that these institutions either don't exist or don't work. But few, if any, liberals say anything like that. Instead, they change the subject. They talk about the Bush years as if they were a cross between a libertarian fantasy and an anarchist dystopia a la "Mad Max."

Here's Obama in his Cleveland speech Wednesday, describing the philosophy that defined the Bush years:

"Cut taxes, especially for millionaires and billionaires. Cut regulations for special interests. Cut trade deals even if they didn't benefit our workers. Cut back on investments in our people and our future -- in education and clean energy, in research and technology. The idea was that if we had blind faith in the market, if we let corporations play by their own rules, if we left everyone else to fend for themselves, America would grow and prosper."

What movie was he watching? At best this is a rock 'em-sock 'em robot battle between delusion and dishonesty. Rhetorically, Bush never advocated anything like any of this. Indeed, Bush the compassionate conservative described his philosophy thus: "When somebody hurts, government has got to move." More concretely, under Bush we had massive spending increases on education, alternative energy, NIH and health care. We saw the passage of the Sarbanes-Oxley bill, and the trade deals Bush pushed are now part of the Obama agenda.

But Obama needs to spout such hogwash in order to sell some very old "new" ideas.

It hasn't worked. Americans understand this isn't 1932 or 1964. Some even understand that many of our problems -- Housing? Entitlements? -- stem from the liberal accomplishments of the 1930s and 1960s. Professional liberals, however, remain in denial, insisting they suffer from a "communications" problem or some such nonsense.

At best, the Democrats bet badly on the business cycle. They expected the economy to recover quickly, as it usually does, and when it did they would credit their policies. That didn't happen. The "new foundation" has either hurt the economy or did little to help it. Worse, from the liberal perspective, it further soured voters not just on Democrats but on faith in government generally, which Obama was supposed to restore.

And that's the funny part. For reasons fair and unfair, the Great Depression discredited laissez-faire economics for a generation or more. Hoover, who was hardly the "market fundamentalist" FDR made him out to be, suffered largely from the (bad) luck of the draw, giving Democrats a chance to argue for a new deal of the cards. For reasons fair and unfair, Obama, who inherited a bad recession and made it worse, every day looks more like a modern-day Hoover, whining about his problems, rather than an FDR cheerily getting things done. Inadequate to the task, Obama is discrediting the statism he was elected to restore.

The punch line? When the economy finally rebounds, it might be just in time for Obama's replacement to get all the credit.